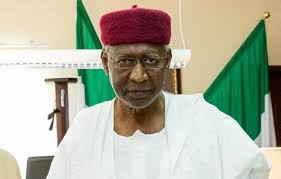 Abba Kyari, the Chief of Staff, CAS, to President Muhammadu Buhari, described in political circles, as one of the most powerful personal Aides of Buhari in the Presidency appears to have laid the foundation for the sacking of Tunde Fowler, Executive Chairman of the Federal Inland Revenue Services, FIRS, a government revenue  generating agency next to the Nigerian National Petroleum Corporation., NNPC; Kyari, who has the ear of the President  was  said to have queried the Ahmed Bola Tinubu, a former governor of Lagos state  and National Leader of the All Progressive Congress, APC, boy’s  over the alleged  discrepancies discovered  in the revenue collections of the agency  in the last four years.

The Presidential CAS may have issued the query to the IRS boss to draw the attention of the President to the mess in the agency  and quickly  do something fast about it before it gets worse.  An aggrieve Kyari was said to have raised  alarm in the query  issued  the FIRS, Executive Chairman, that there are variations  between the budgeted collections  and actual collections of taxes between 2015 and 2018.

More worrisome was the  President’s Aide’s claims  that the tax collections  between 2015 and 2017 , e under the current Administration   were significantly worse  than what  was said to have been collected under the Corruption ridden   former  President Goodluck Jonathan Administration.  Between 2012 and 2014.

Note that former President Olusegun Obasanjo  had approved a four percent Cost of collection to  the agency  in order to encourage them  to improve on their yearly revenue collections. In the same vein, Obasanjo  was said to have also approved seven percent Cost of collection for the Nigerian Customs Service, NCS. But Fowler had made Nigerians to believe that the Cost of Collections for the agency had been going down , which analysts had attributed to poor revenue collections in the last four years.

Given an insider information,  the FIRS boss had revealed that  the agency against all odds collected  N3.307  trillion in 2016,  n4.027 trillion in 2017 and   5.320 trillion in 2018. The FIRS helmsman who would not believe that the agency is performing below expectations   noted that that there had been steady improvement over its revenue Collections in the last three years.

Recall that last January , he had gladdened the heart of Nigerian when  he announced that  it has budgeted to collect N8 trillion from  oil and non oil exports this year. The optimism was informed by the revenue that was collected in  2018  due to the blockage of all areas of revenue leakage.

The FIRS  boss  was said to have  made it clear to those that  cares to listen that  the agency  officials had not  allowed the drop in the their Cost of Collection incentives  that was  approved by the Obasanjo Administration in subsequent years to  affect their operations. He had disclosed that   in 2016, the agency got below the  four percent Cost of Collections.  According to him, the agency was only given 2.6 , 2.49 percent in 2017 and 2.14 percent in 2018.   Fowler  opined that in spite of the fact that the agency   has been making tremendous efforts over the last two years to increase its tax collections, particular from the non- oil  sectors of  the economy, the government  has not really rewarded them appropriately.

It is not surprising why Critics had accused  the CAS, of having  ulterior motive for querying the agency and inviting the Executive Chairman  to submit  a Comprehensive  variance  analysis  of its revenue Collections  between 2015 to 2018  to his office and  explaining reasons  for  the poor collections but did state what would happen to happen to him if he failed to do so . The question on the lips of most people:  Is the FIRS now under the CAS to The President or  the ministry of Finance?

Many believe that that Kyari  may have taken advantage  of the delay by the  President to assign,  any of the cleared ministerial nominees by the Senate to oversee the ministry of Finance to send a signal to the Ministries, Parastatals  and Agencies   that the bulk stops on his table and therefore, he  must be carried along by them or be ready for trouble.

This is where the Katsina born Nigerian President may have to intervene to call the CAS to order before he extends his powers to probing NNPC or NCS, which might have a backlash effect on the government.  Already, he may have known that the NCS is a no go  area as Hameed Ali, a retired Army Colonel and the Customs Comptroller General would not give him room to interfere in his agency as he is not answerable to him.

Political analysts describe the query issued Fowler, the FIRS ,  Executive Chairman, by Kyari, the President’s CAS, as  laughable as only the President has the powers to retain or sack him .

Giving the Presidents style of Administration, which has become noticeable in his second term in office, he believes in working with  people he knows and not strange faces. He has worked with Fowler in the last four years and may not want to drop him as being planned by Kyari.  He was said to have made similar moves  against  Godwin Emefiele, the Delta state governor of Central Bank of Nigeria , CBN, in order  not to be considered for another five years in office by the President but was disappointed.

While  Kyari is battling to put all  Chief Executives of MDAs under his control and ensure the removal of anyone who does not recognise his Authority, Anthony  Ayine, the Auditor General of the Federation, AGF,  is not  happy with the government agencies  including the Economic and Financial Crimes Commission, EFCC, under the acting Chairmanship of  Ibrahim Magu,  for violating  the country’s accounting rules  and failing to submit  their annual financial returns to the Department for proper scrutiny.

Ayine had said  that  about N13.96 billion  reported as salaries and wages  in the Consolidated Financial Statement of the  EFCC, it was not on the trial balance list of agencies and other government Departments or ministries  submitted for reconciliation.

He may have shocked Nigerians when   he revealed that the anti-graft agency is one of the  agencies  with doubtful Cash balance of over N315 million. Others on the list are the State House,  Office of the CAS  to the President  and the National Assembly.

The Auditor General, believes that many of the MDAs may not have taken the auditing of their yearly financial records serious over the years  because of  the believe that  the Department can only bark without biting. He noted that the situation has been made worse as there is no enabling law  that could compel  and sanction MDAs which ignores audit queries  and the refusal of the President to assent to sensitive bills  on fiscal governance.

Ayine who  could not hide his feelings  lamented   that MDAs  without audited reports  have increased from  148 in 2014 to  323 over the last four years, an indications that there is much financial indiscipline   under the Buhari Administration than under   previous Administrations which calls for questions.