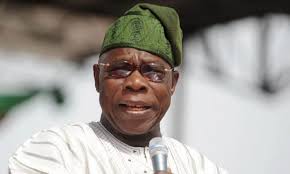 In spite of the fact, that former President Olusegun Obasanjo, who had endorsed Atiku Abubakar, as his President Candidate, has repeatedly said that he would not Campaign for him or president Muhammadu Buhari of the ruling All Progressive Congress, APC, for the 2019 general elections, he appears to have broken the promise.

This is evident going by his subtle Campaigns for Atiku Abubakar, a  former Vice President and Presidential Candidate  of the People’s Democratic Party, PDP , by urging Nigerians to vote for someone who would reduce their sufferings.

Obasanjo may have taken advantage of the ”Owu 27th National Convention” at Iwo, Osun state to speak out. The former President had urged Nigerians to vote only ‘leaders that had the capacity to drive the growth and development of the country”.  He disclosed that only ”credible leadership would promote  good governance, and therefore the need for Nigerians to vote ”wisely in the 2019 polls”.

Appealing to the people to look at the parties that had governed and vote for the one that would return the economy to a better state in the next four years.

It would be recalled that the party Campaign ground at Ibadan, south west Nigeria, Bukola Saraki, Senate President and Chairman, Atiku Presidential Campaign Council, had assured the people that the PDP Presidential Candidate would reduce their suffering by putting food on their table and job protection.

Between 1999 and now only the PDP and APC had ruled the country since the return of Democracy . The PDP had ruled the country  for 16 years but was unseated by Buhari of the ruling APC in 2015. For the 2019 general elections, the Independent National Electoral Commission, had registered about 50 political  parties but only 29 them were said to have presented Presidential Candidates that would stand for the elections.

In adopting Atiku,Ikenga Chinyere, National Spokesman of the Coalition  parties, CUPP, said the decision to adopt Atiku was arrived at a closed door meeting by members of the CUPP. The parties said  the Presidential Candidate was endorsed because he met the criteria used by the CUPP  members in arriving at the decision.

These , they said include national acceptability, financial capacity, national spread of PDP, leadership capacity to re-build the battered economy, experience and ability to secure and unite the country which is in a sorry state.

Not many people are surprised about the endorsement of Atiku by the Opposition parties.  Obasanjo, who had been a strong critic of the Buhari Administration may have sold the idea to the parties  as the only way to unseat him in the 2019 Presidential elections.  He may have told them that as it is today, no party , including the opposition PDP, would be able to  defeat the Kastina state born Nigerian President unless the parties agree to join force together and work as team to sack the common enemy from ASO Rock.

The former President was said to have told Uche Secondus, National Chairman of the PDP to prepare his mind to work together  with the other opposition parties to form a formidable party that could confront Buhari in the 2019 elections. Obasanjo’s assurance that he would lead the Coalition may have encouraged the parties to sign a Memorandum of Understanding , MOU, to field a single Presidential Candidate in the 2019  general elections.

He was said to have made them understand that unseating Buhari in the 2019 elections would not be a ”tea party ”as the Presidential Candidates of the parties in the Coalition must be ready to burry their individual differences and work for Atiku, the PDP Candidate to defeat Buhari in 2019. The Coalition, of parties, which had joined forces with PDP, to contest the 2019 elections, according to sources have the backing of the ex-Generals who are opposed to Buhari re-election bid.

But Buhari, appeared unruffled with the Coalition  of Opposition parties joining forces with Atiku. A Presidency source told The Value News Magazine that  he remains ” strong in his belief  that he could outsmart the adversaries and weather any threat from them.

Notwithstanding  his belief to defeat the ex-Generals and the Opposition working against him in the 2019  general elections, the PDP , and the Coalition of Opposition parties are already preparing to seize the National Assembly in 2019 to prepare a soft landing for Atiku, if elected the next  President of Nigeria in 2019 for easy passage of his bills and yearly budgets  for execution of projects and provision of Infrastructural facilities to the people.