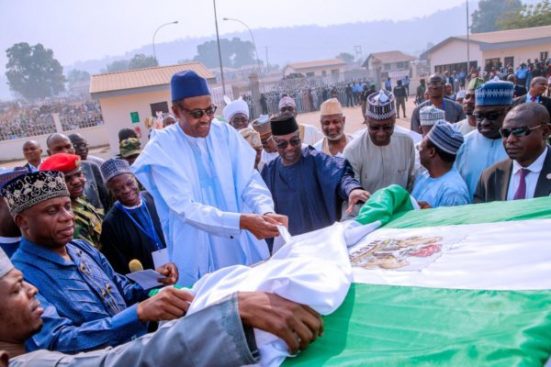 The government of former President Olusegun Obasanjo has raised the hope of Igbo importers  and Igbo traders of going to develop the Onitsha  river port in Anambra state. Project from the past governments.

It was learnt that contracts were awarded for the  two multi- billion projects, giving  importers hope that their ordeal of their Containerised cargoes to the south east would soon be over. A Presidency source told The Value News that Jonathan had opportunity of releasing funds to the contractor to expedite work on the development of the Onitsha port but he kept on dillydallying  until he was defeated in the 2015 Presidential election by President Muhammadu Buhari of the ruling All Progressive Congress, APC.

While work on the Baro port had continued without stop, Danladi Ibrahim , a former Nigerian Inland Water Ways, NIWA, Managing Director had disclosed  that the Onitsha river  has  been Concessioned  to two undisclosed Companies, adding that the port will commence operations at the end of 2018.

Ibrahim had said that the Concession will last for 25 The then NIWA boss had said that 75 percent of the cargo handling equipment designated for both Onitsha and Baro river ports have been installed. He had confirmed that the dredging and Concession of the two river ports were awarded at the same . He has given assurance the Onitsha and Baro river ports would be Commissioned by the President. He may have said that to gladden the heart of the Igbos that the Buhari Administration cares for the development of infrastructural facilities in the region.

He may have shown that the Onitsha river port project does not matter as his attention was focused on the development of the Baro river port in Niger state. Funds were released to  NIWA, overseeing the projects to mobilise the contractor on site.  Note that the Baro river port, particular, has been on the priority list of projects to be developed in the north by successive Administrations but the efforts put in place to develop it, according to a source in the ministry of Transportation since the 1980s had proved abortive.

Late President Musa Yar’ may have given hope to the people of the state that the abandoned project would be completed when the government had en the contract for the dredging of the river port and the expansion of the river bank which was worth billions of naira. The project may have dragged on due to the death of former President.

Given the importance of the project in the country’s intermodal transport, Jonathan , the then President was said to have  directed Ngozi Okonjo-Iweala, the then minister of Finance and Coordinator of the Economy  to transfer an alleged N19 billion intervention funds  for the dredging of the lower river Niger  to the  ministry of Niger Delta headed by Godsday Orubebe instead of the ministry of Transport, for shoreline protection  and land reclamation. He was said to have given the contractor four weeks to do the work but that was how far he could go.

There is no gain saying the fact that the Baro river port was about 90 percent completed by the Jonathan Administration before it was abandoned  which makes it easy for the Buhari Administration to take it over and thus, claim credit for its completion, to put the north on the list of regions that have seaports in the country.

The Katsina state born Nigerian President was said to have repeatedly made it clear  since 2015, that he will make sure  all the abandoned projects  by the Jonathan Administration are completed including the Baro river port project in Niger state was completed.

He has every reason to put the Baro port on the priority list  to create more jobs in the north. He is optimistic that at least two million jobs will be created at the port  alone. Note that the north is land-locked and no single seaport.Signs that the Baro river port which contract was awarded almost at the same time with the Onitsha  river port by the Federal Executive Council, FEC, had reached advanced stage emerged  last December when  Senator  Olorunnmbe Mamora, a close political ally of Asiwaju Bola Tinubu , a former governor of Lagos state and Managing Director, NIWA, confirmed that  N2.5 billion cargo handling  equipment  have been installed  after a visit to the isite last December.

The progress report of the work at the site may have gladdened Buhari that the project would be commissioned before this forthcoming Presidential election to list it as one of the achievements of his Administration and why the people of the north Central geo-political region must vote for him in the election to return him to power to do more for the region.

Last week, Buhari  Commissioned, the port which was said to have completed at a cost of N6 billion by the Chinese Civil Engineering and Construction, CGCC,  Global Project Nigeria limited. Tayo Fadile, Spokesman,  said the completion of the Baro river port was not unexpected. This is because  Buhari has a personal attachment to it because he in the design of the port complex as Chairman of Petroleum Trust FUNDS under the late Sani Abacha Administration.

An elated Buhari  was said to have declared while Commissioning the Baro river port that ”it will enhance  intermodal transportation activity in the country”, stating that his administration will do more in the region if re-elected  into office . He cited one of the projects that will be quickly executed by the government  in the state would  be the rehabilitation  of roads leading to the Baro river port to facilitate movement of goods and services in and out of the port.

He noted that the newly Commissioned river port will ”reduce the the big trucks on Lagos roads and help decongest the country’s seaports.

Rotimi Amaechi , a former governor of Rivers state and minister of Transportation who could not hide his feelings was said to have thanked the President  for directing  the completion of all abandoned projects of past Administrations, in the country, which Baro river project was one of them.

Many had expected the minister to remind Buhari about the abandoned  Onitsha river port, which had been on the drawing board for promises of past Administrations to execute it. There are fears in Igbo traders circles that the Onitsha river port may never see the light of the day with the Commissioning of the Baro river port as the government may never want to be involved in a such a project not to enter the Niger state based port unviable.