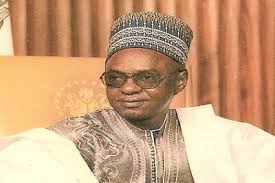 When  Shehu Shagari, died on Friday, December 28, 2018 after a brief illness at the National Hospital, Abuja, people had expected President Muhammadu Buhari, of the ruling All Progressive Congress, APC, to announce his death to the nation as a former President.

Late Shagari had ruled the country  on the platform of the National Party of Nigeria, NPN, between  October  1st, 1979 and December 31, 1983,  before  he was toppled in a military Coup, which truncated the Second Republic. Buhari may not have participated in the Coup but he was made to be the Head of the Head of state because of his integrity and to give the regime credibility.

Perhaps, his slow response  to the former President’s death may have given opportunity to the  Sokoto state government and the family to take the initiative to make the public announcement. In announcing the passing away of the 93  year-old former President to the nation, Tambuwal said, ” I regret to announce the death of former President Shehu Shagari who just passed away  at  theNational Hospital, Abuja”. May his Soul Rest in Peace”.  The governor’s announcement was quickly followed by that of Bello Shagari, one of his grandsons. ”I regret announcing the death of my grandfather,, H.E, Shehu Shagari who just passed away at the National Hospital, Abuja.

Many believe that if Buhari had taken advantage of the opportunity presented with the death of the former elected President when he was informed about it by the state government to   make the public announcement and ensure  the Federal government take up the burial arrangement to identify with the state it would have boosted his sagging political  image in the state.

The people of the state, according to sources, have not been happy with him over the continued detention of Sambo Dasuki, a retired Army Colonel and a former National Security Adviser, NSA, to the Bayelsa state born former President Goodluck Jonathan.  The matter may have been laid to rest if Buhari had annoced Sshagari when Aso Rock was notified about it.

Recall that when President Donald Trump of the United States was notified about the death of former President George Bush by the family, on December 1, 2018  , Trump announced and designated  December 5th as a national day of mourning for deceased President as a mark of honor for him. He did not stop there as he was accompanied by Melania, the First Lady, to attend the funeral at the National Cathedral in Washington DC. The situation was different in the case of late Shagari.

Junaid Muhammed, a second Republic lawmaker  said Buhari has no moral justification to mourn the late President because he had toppled his Administration in 1993. The Kano state born Nigerian President had  described Shagari’s demise  as” the departure of a patriot , whose life of service  and humility  was widely acknowledged”.

Junaid believes ” Buhari was not sincere”  in his tribute to the late former President, as he had participated in bringing down a government and a man who had nothing to gain and who was in his ’60s and knew how to retire  from the public service quietly before he was forcefully removed from office by the a military Junta.

He admitted that the first term  of the late Shagari’s government may not really be spectacular as the political appointees and  the late President, disappointed Nigerians.  According to him Shagari, who had served the country in different capacities in the past did not want to rock the boat but waited until after the election of 1993 when some of the bad characters in the government were asked to leave. There were many other people who share the same views with the  politician .

Political analysts fear that the coup of 1983, dealt a devastating blow on the late President’s health as they never got on well because of  his failing health a. Until his death, Shagari was said to have remained unhappy with the military elites for truncating a duly elected government . He may have expressed his deep seated anger against the military elites in his  article Nigeria: How Buhari & Co toppled Second Republic  which was published in Africafiles in  2004.