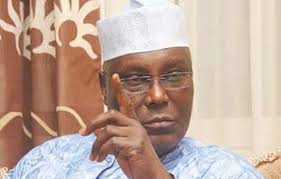 Atiku Abubakar, a former Vice President and Presidential Candidate  of the People’s Democratic Party, PDP, in , general elections may be counting  his days  as a free Nigerian as President Muhammadu  Buhari, of the ruling All Progressive Congress, APC, appears to be losing patience on because his   activities, considered as working against the  government.

Lai Muhammed, minister of Information  may have spoken the mind of the President when he reportedly said that  the ”opposition  party  are colluding with anti-democratic forces  and those he considered as ”dead enders  to fan embers of violence in the country.  He alluded to the PDP and  its 2019, Presidential Candidate, Atiku,  believed to be doing everything within their powers  to sabotage  the current APC government  . He noted that that the party  through proxies   are overheating the polity to create the impression that Buhari has lost control of ruling the country.

An aggrieved Muhammed  said  ”no government  with the kind of evidence  before it of plans  to subvert  the power  of the state , attack the  country’s economic livewire and generally unleash mayhem on the polity will keep quiet”, an indication that  the Katsina born Nigerian President may have h beamed  his search light on Atiku and other   PDP Chieftains ostensibly to silence them.

Signs that the PDP Presidential Candidate and other Chieftains of the party may soon run into trouble emerged last week when Tukur Buratai, a General and Chief of Army Staff alleged who failed the 2019 general election s are the one sponsoring the bandits in the states of Zamfara, Katsina, Kaduna, and Sokoto including Niger, Nasarawa, in the geo-political .

The Kwara state minister of Information and Culture,  may have given ammunition to Abubakar Adamu, acting Inspector General of Police, IGP, Ibrahim  Magu, acting Chairman , Economic and Financial Crimes Commission, EFCC, and  Magaji Bichi, Director General, Department of State Security to go after the  PDP Chieftains who believe that Buhari, the APC , Presidential Candidate stole their mandate.

Note that Atiku has not hesitated to tell those that cares to listen that he won the February 23, 2019, Presidential election conducted by the Independent National Electoral Commission, INEC, but was robbery of Victory by  Buhari,  with the active connivance of the Connivance of INEC officials. He  had dragged  the  Katsina state born Nigerian President and  Mahmood Yakubu, a Professor and the Commission Chairman to  the Presidential Election Tribunal to reclaim his stolen mandate.

In reaction to the minister’s claims that the PDP Chieftains, particular Atiku, were doing everything sabotage the Buhari Administration, the Adamawa state born top-flight politician described the allegations as ”all lies”. He noted that his actions and those of the PDP are only part of the ”process to retrieve their mandate”. The former Vice President who described himself as a man of a ”democrat”.

note that the APC chieftains have not found it funny that  Atiku could petition the Tribunal over the election and therefore were ready to fight back.

Worried that he may lose at the Tribunal because of the involvement of  Zainab Bulkachuwa, a Justice of the Supreme Court  and wife of Adamu Bulkachuwa,  a Senator elect on   the platform of the  APC,   in the last National Assembly Election, Atiku  and his cohorts have piled up pressure on Tanko Ibrahim Muhammed, the  acting Chief Justice of Nigeria, CJN, to remove her from the Tribunal.

He may have known that he  had lost at the Tribunal   at its inaugural sitting of when  Bulkachuwa, who is incidentally, the President of the Apeal  Court made a passing statement  that ”elections are held in Nigeria every four years  into elective  positions” , stating that  ”no matter how well the election is conducted  there are bound  to be complaints”.  Atiku and the PDP officials may have taken the statement to mean that the last presidential election was well conducted and therefore  no need  for the parties to  be  at the Tribunal.Tthere are fears in both official and unofficial circles that if the  PDP Candidate  should lose at the tribunal, security operatives may bounce on him to prove that he is not above the law.

Political watchers want  him to toe the line of Bukola Saki, the Senate President  by making peace with the President to enjoy his freedom in and quiet life  without being trailed by security operatives.

While Atiku is pushing for the replacement of Bulkachuwa, as Chairman of the Presidential election Tribunal, Ademola Adeleke , the PDP, governorship Candidate, in Osun state , who lost to  Gboyega  Ayetola  the APC , Candidate,  at the Tribunal , has headed to the Supreme Court, where he believes he could get Justice, going by the documentary evidence which he had tendered before the  apex Court about the election.