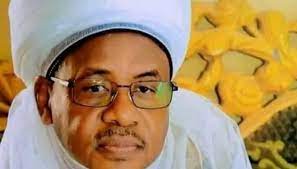 Barely after 32 days in the captivity of the armed wielding bandits in Zamfara, described as home of the bandits in the north western geo-political region state, Hassan Attahiru, the Emir of Bungudu Emirate has been released, amidst jubilations.

Until his release on Friday, October 17, 2021,   Hussaini Rabiu, the state Commissioner of Police, CP, and other security agencies personnel, with the support of Bello Matawalle , the governor,  had mounted a  manhunt for the k Emir, who was kidnapped by the armed bandits  along the  dangerous Kaduna- Abuja, Express way on September 14, 2021, by engaging the services of informants to track the criminal elements.

Although the security agencies personnel  may have found it difficult at the initial stage getting a clue of the whereabouts of  the Emir  because of the too many  bandits camps that are scattered all over the forests in the state. Ibrahim Dorsara, the state Commissioner of Information   had said that there are 100 bandits camps in the state with 32,000, armed wielding followers terrorizing the state.

Giving an insider information on how the Bungudu Emir, was released by the killer gang bandits, Shehu Ahmad, who is the Special Adviser  to Matawalle, the Zamfara state governor on  Strategy, had said  that ‘’the government  played a key role  to ensure that the Monarch returned safely home’’.  Many believe, that the Zamfara governor, who is used to paying out ransom to the bandits to facilitate the release of victims in the state, particular, students and their Teachers,  may had doled out millions of naira to facuilitate the Emir’s release.

However, a school of thought believe that the governor had provided all the necessary financial support to the Police and the other security agencies in the state to do their work. Ahmad, the strategy Adviser to the governor may have alluded to this when he singled out the Force and the Leadership of theMiyetti Allah Cattle Breeders Association of Nigeria, MACBAN, in the state for creating the enabling environment that was said to have facilitated the release of the Emir.

With the trauma, which the kidnapped Emir may have passed in the hands of the bandits in their hideout Location in the forest before his eventual released after alleged Negotiation may have informed why the family members have pleaded with friends and well-wishers including the general public thronging the Emir’s Palace to catch a glimpse of him   ‘’to respect  his privacy  in the coming weeks  as he receives medical attention and post-trauma management’’.Perhaps, to control the movement of visitors into the Bugundu Emir’s Palace, security has been tightened up around the Palace and its environs.

Note  that the bandits kidnap of Hassan, the Bungudu Emirates, Monarch, has brought to three, the number of Emirs that had fallen into their tarp  in the north western geo-political region in the last three months. The first to be kidnapped was l-Hassan Adamu, the Emir of Kajuru, and some members of his family at his residence at Kajuru Local Government Area of Kaduna state. The successful Kidnap of the Emir of Kajuru Emirate without any resistance from the people may have encouraged the bandits to go after Kpop Ham, the Paramount ruler of  Jaba Chiefdom, barely three weeks after the Kajuru incident.

Indeed, lack of respect for the traditional Institutions  and extensive ravage of Zamfara, Kaduna, Katsina, bauhari home state, Kebbi , Sokoto, the Caliphate state and Niger, the home state of former military President , General Ibrahim Babangida, rtd, had resulted in the strong opposition against the call on the Katsina state born Nigerian President to grant  amnesty to the bandits.

Recall that the Zamfara state governor, who has suddenly made a U-turn, to kick against talks about granting amnesty to the bandits and Abubakar Gumi, a Clergy man, had been the arrowhead championing the cause of the Criminal elements to be granted amnesty.

Sani Usman, a retired Brigadier General and former Director of Army Public Relations  had said that there was basis for anyone to talk about granting amnesty to the bandits , ‘’who attack, steal and kidnap for ransom’’, thereby forcing some of the governors, to shut down schools, in the region’’.

An aggrieved Brigadeir Hassan, who could not hide his feelings had said that’ ‘many public assets in Zamfara, Kaduna and Katsina states, particular, have been destroyed by the bandits who are following the footsteps of the Islamic Fundamentalist, BokoHaram Group and the 2016, splinter Group, The Islamic State of West African Province,ISWAP, militants  operating in the north eastern geo-political region, which had somewhat destroyed government provided  Infrastructural facilities in Munguno and Baga towns in Borno state.

The retired Brigadier General noted that the Nigerian president who is under severe pressure from several quarters to grant amnesty to the bandits as he had extended to the Insurgents in in north east geo-political region, should be able ‘’to distinguish between those bandits who had committed heinous crimes, across the flash point north west states from those that were coerced into seeking repentance’’. He may have spoken his mind when he said that ‘’the hardcore bandits should be made to face justice as part of efforts to curtail banditry activities in the north and north central geo-political region’’.

In a related development, the Operation Hadin Kai troops, OHK, prosecuting the Counter Insurgency war in the north eastern part of the Federation appear to be laughing at the apparent lack of cohision between the two Islamic groups: BokoHaram and ISWAP, as they battle each other to a standstill.

The remnants of BokoHaram fighters in the Sambisa Forest may not have forgiven the ISWAP militants and Al-Barnawi, their Leader, who has link with the ISIS of the Middle East country of Iraq, for causing the death of Shekau, their Leader, during a gun dual in the Sambisa Forest over the later’s refusal to pay allegiance to ISWAP . The disunity between the terrorist groups may have exposed to the OHK troops and the MNJTF, which cashed on it to deal decisively with them in all fronts.

Last September, the aggrieved  remnants of the BokoHaram, Insurgents, who believe that they have already the war to the better –equipped Nigeria and the Multi-national Jointed Task Force, MNJTF,  were said to have launched attack on the Al-Barnawi, led ISWAP, militants on the Nigeria side of the Lake Chad region, seizing a strategic Island. The gun duo between the Islamic terrorists groups operating in the north east states of Borno and Yobe, may have resulted in the death of the Al-Barnawi, the ISWAP, Leader.Note that ISWAP, has been fighting  BokoHaram remnants since the death of Shekau, their Leader, for refusing to pay allegiance to Late Al-Barnawi’’.

Given the fact that neither the BokoHaram Group nor the ISWAP militants have an accepted Leader, with the death of Sheakau and Al-Barnawi, respectively, may have informed thousands of BokoHaram fighters and their family members in the Sambisa forest have dropped their gun and surrendered to the Nigeria troops. In two weeks alone, 13,243, BokoHaram Insurgents, according to Bernard Oeuko, a Brigadier General and the Director of Defence Headquarters, Public Relations had surrendered in Borno and Yobe states and more are likely to surrender soon because of biting hunger and intensified air bombardment o the Sambisa Forest and the Nigeria side of the Lake Chad region, bastion of the ISWAP militants, , to support the ground troops to flush them out..

Given an insider information going by reports pieced together since BokoHaram Launched the Insurgency war in Borno in 2009, during the Administration of former President Goodluck Jonathan, the Army Chief had said that over two million  people have been killed  in the war which had spread   over the borders  to Niger, Chad and the Central African country of Cameroon.