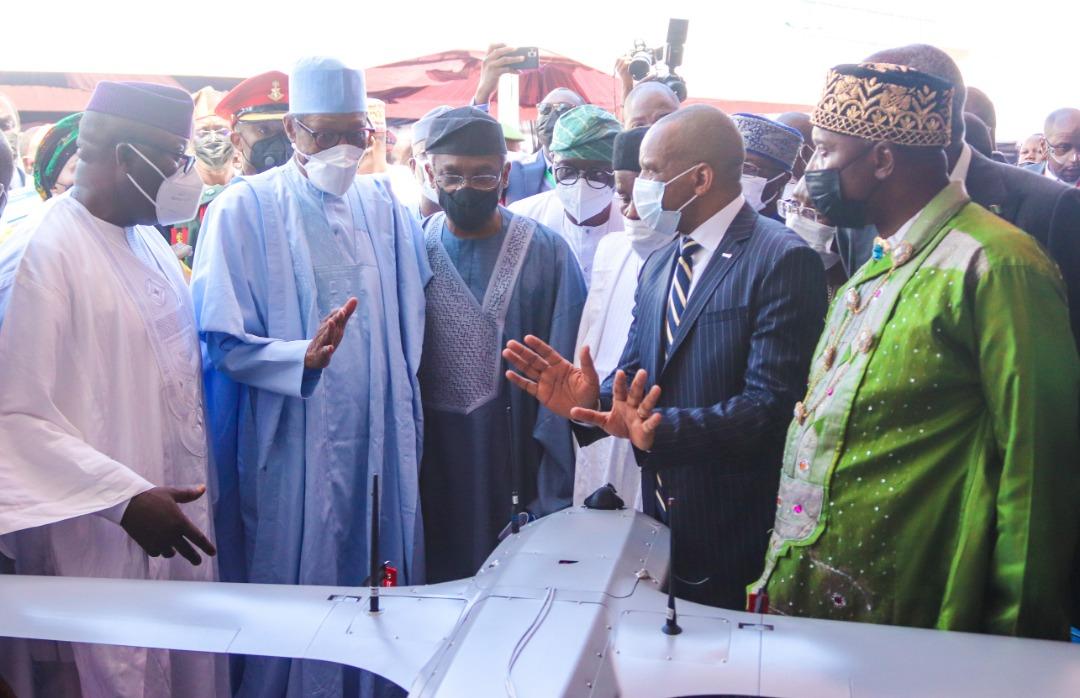 President Muhammadu Buhari, a retired Army General, may have proved pundits wrong that he would not show up in person  in Lagos, the nation’s Commercial nerve centre, on Thursday, June 10, 2021, for the Launching of the much publicised  Nigerian Maritime Administration and Safety Agency, NIMASA, Integrated  National Security and Water Ways  Protection Infrastructure, popular, Deep Blue Project Assets .

The Nigerian Ports Authority , NPA, NIMASA, and the Lagos state government may have worked  round the clock to ensure that there was no truck laden Containers on the road to create the impression that there was no gridlock at the Apapa Area of the Commercial City.

The deep Blue project was conceived in 2017, by the ministries of Transportation, under the close watch of Rotimi Amaechi, a former governor of Rivers state and  Mamman Ali, a retired , Major General  and former minister of Defence. This may have informed why Amaechi , had commended Magashi, his successor  and the service Chiefs,  both past and present, for their Contributions throughout the preliminary stages of the project.

However, he  would want the current service Chiefs  to take a cue from their Predecessors  who  made appreciable  impact  the preliminary stages of the  project to sustain the tempo, now t that the maritime Assets have been deployed  to guarantee the safety at the Lagos Anchorage Area, SAA, as the Ocean Marine Services Limited,  OMSL, a private security outfit  engaged by the Navy  for such operations have been disengaged by the government.

Recall that  OMSL, in partnership with the Nigerian Navy over the years  have  been providing security services to foreign ships at the SAA, for $2,000 , per day at the Lagos ports of Apapa and Tin can Island  at the designated  SAA.  The Value News learnt that the Navy, OMSL and other Private security outfits use close to 300 escort vessels  to secure  ocean going vessels in Nigerian waters and the Gulf of Guinea.

The  katsina state born Nigerian President, at the instance of  Amaechi, the minister of Transportation,   Dakuku Peterside,  a former director General of NIMA and  his Management Team,  had awarded a $195 million contract to an  Israeli security firm, HLSI  Systems and  Technologies Limited, for  the delivery of the Land facilities  which comprises of  the Command, Control , Communication, Computer and  Intelligence Center,C4i ,  supply of  two Special Mission  vessels and 16 fast  interceptor boats for the sea operations, of the anti-piraccy war.

This is in addition  to the air assets which comprises  of two Special Mission  Aircraft for Surveillance   of the country’s  exclusive Economic zone and  three Special Mission Helicopters for Search and Rescue operations and four unmanned aerial vehicles.

Bashir Jamoh, the Director General , NIMASA,  and his officials   , were said to have received one of  the two  Special Mission Aircraft,  Cesna Citation CJ3,  on May 12, 2021, at the Murtala Muhammed International Airport, MMIA, Air Force base, Ikeja, Lagos, remaining  one that is yet to be delivered by the Israeli security firm.

The Israeli  firm may have  expedited action in the execution of the  $195 million contract  as   the Nigerian  government, on its part , had not defaulted on the monthly instalmental  payments over the period of 36 months, agreed from July 2017 to June 2020.  NIMASA , also was said to have  paid  the Israeli firm $19,630,000  as Management  training consideration, as contained in the Appendix 4, of the Agreement  for the contract for the project, which were said to have been paid on monthly instalments for a period of 36 months.

The Company was said to have also been paid  N59 million ,830,000.00 ,   to secure  and survey  Nigerian coastal waterways  , which was said to be higher than  the annual  capital  expenditure of the Nigerian Navy in 2019.

Jamoh, the NIMASA, Director General  may have    a hint of the planned Launching of the Deep Blue project by the Nigeria President , on May 12, 202, when the  agency received one of  the Surveillance Aircrafts  that would be deployed  to for operations to   prevent  pipeline   vandalism,  oil theft,  illegal bunkering, arms smuggling, drug trafficking, human trafficking Piracy  and illegal fishing in Nigerian waters and the Gulf of Guinea. There are indications that the Surveillance Aircrafts, would also be deployed  for pollution  prevention and control in the Nigerian maritime domain.

The Magazine gathered  that   between May 12, 2021, and June 10, 2021, Jamoh and his officials in Collaboration with the officials of the ministries of  Transportation and Defence had worked towards  the  Launching of the multi-million dollars, Deep Blue Project assets  in Lagos, the nation’s Commercial nerve centre.    They were said to have closely worked  with Usman Alkali Baba, the Inspector General of Police, eIGP, to ensure that  adequate  security  was provided was provided  in the city to give the  Nigerian  a president a  breather  to Commission the Maritime assets at Apapa without any  form of protests over the Apapa  bad road by aggrieved agents.

It was surprising why tZubairu Muazu, the Lagos state Commissioner of Police, at the instance of the Baba, the IGP, had deployed hundreds of policemen, armed to the teeth at strategic locations in Ikeja,   Yaba,  Ebute Metta and Apapa, particular,  to forestall any protest .This may have informed why there was absolute Calm in these flashpoint point areas in   Lagos,  where Buhari had two projects to Commission, thus killing two birds with one stone.

He was said to have  Commissioned  the Deep Blue Project assets  at Apapa, which  , the minister of Defence had ‘’ said   aims  ‘’ to prevent  illegal activities   in the Exclusive  Economic zone , enforce maritime regulations.enhance safety of lives at sea and prevent illegal activities in the inland waterways’’.

Between 2017 and now, NIMASA, officials  have been at the forefront of implementing the project  and following the HLSI, the Israeli Company  which had won the   $195 million to supply the maritime security  Assets bumper to bumper to ensure that they keep to the terms of the agreement  without  defaulting to avoid shifting the gold post.

By Commissioning the maritime Assets, the NIMASA, helmsman and his Management Team, appear to have been given the nod to deploy the Assets into Nigerian waters and the Gulf of Guinea, for operations to forestall criminality .   Many believe that Buhari may have been encouraged to Commission the maritime Assets  to send a message to the Pirates operating in Nigerian waters and the Gulf of Guinea, that it is  no longer going to be business as usual , following the attack on a Turkish Container ship, MV, Mozat,  manned by Boden shipping, which provides technical agreement for the vessel off the coast of  Nigerian waters , resulting in the kidnap of 15 Sailors and the death of one Azerbaijani sailor. The Liberia flagged vessel, according to NIMASA, report,  was sailing from Lagos , Nigeria,  to Cape town in South Africa, when it was attacked by Pirates , some 100 nautical miles  , north west   of the Island  nation of Sao Tome and Principe.

An elated Magashi, the minister of Defence, had told those that cares to listen that  with the Commissioning of the Deep Blue Project Assets by   the Nigerian President,  ‘’safety is guaranteed in Nigerian waters and the Gulf of Guinea  for Container ships  and other cargoes vessels, noting that ‘’it  would  further attract , Foreign Direct Investment, FDIs, into the country’’.