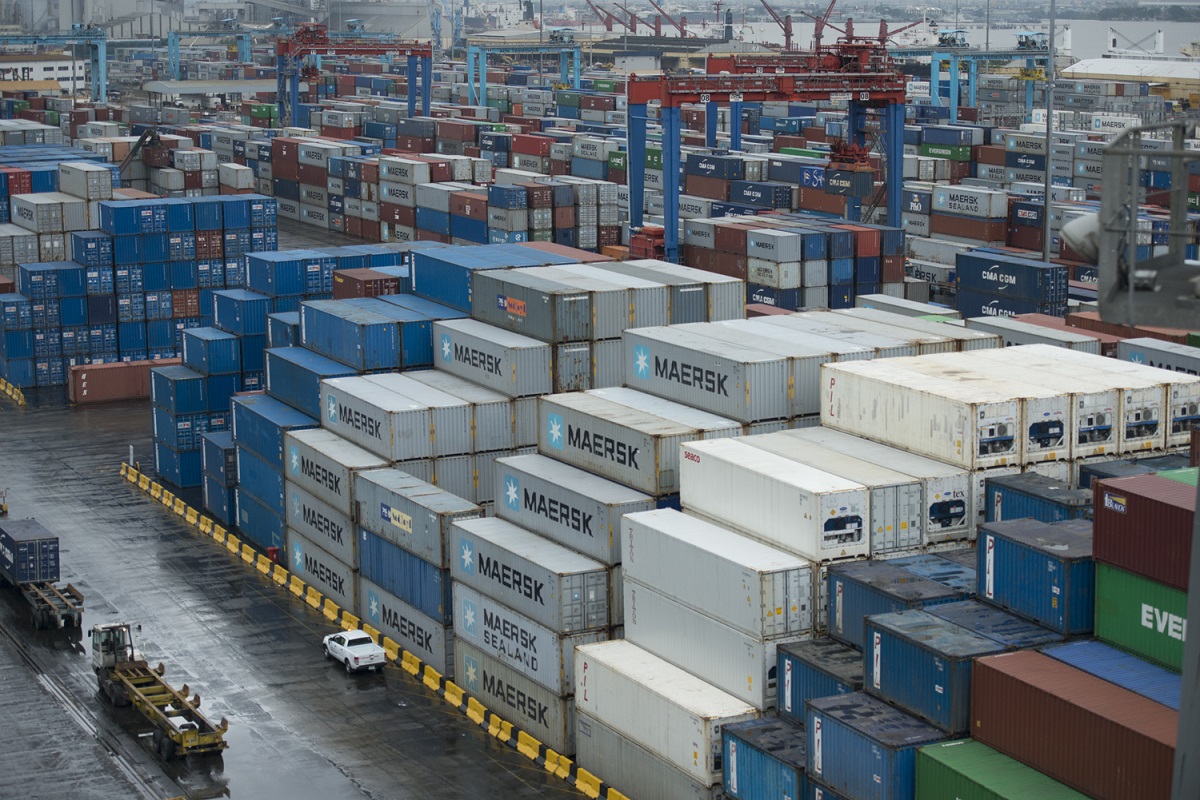 More facts have  emerged why Comptroller Malanta Yusuf, described in Maritime circles as an encyclopedia of the Customs and Excise Management Act, CEMA, and teacher, appears to be making appreciable impact at the Nigerian Premier port, Apapa, in the  recent time. This is because of his expertise in Information Communication Technology, ICT, and knowledge of the Lagos port and Terminal operations over the years.

The Unregistered drug and cocain importers with their clearing agents had created the impression that they could maneuver  their way at APM, a Container Terminal , SIFAX and other terminals  under the Apapa Customs Command. Between February and May 14, 2021,there have been several cases of imported Tramadol and cocain being smuggled into the country and which were in the process of being cleared before the alarm blow, no thanks To Comptroller Yusuf and his informants.

The unregistered Pharmaceutical drug importers and cocain syndicate may have created the impression that they could push such their hard drugs  into the Nigerian market through the Lagos port by taking advantage of the Apapaa Customs  boss who  was said to have assumed office last February  following the elevation of Comptroller Abba-Kura, the former Area Comptroller to the enviable rank of  an Acting Assistant Comptroller General, ACG overseeing the Customs Headquarters. They got it wrong.

Unknown to them, the Apapa Customs Comptroller, has his plan B, on how to deal decisively and force them  underground. The hard drug smugglers who were said to have applied different tactics to carry out the nefarious trade in the last three months will never forget their experience in a hurry as the ApapA .   Some of the Apa cocain smugglers  may have gone to extreme  lengths  to ensure  their illegal  cargos  avoids detection  at the Apapa Customs Operatives in Collaboration with the Nigerian Drug  Law Enforcement  Agency , NDLEA, personnel, in the case of cocain  smugglers  were stopped.

The seizure of  two million  capsules of tramadol ,  in 554 cartons, declared by the importer in his Single Digit, SGD Form, bear eloquent testimony to  show  the lengths to which the  drug importers could go  to take  delivery of the illegal Consignment at the port.

Last May, the Command Enforcement officers with the backing of Yusuf, the Apapa Customs Area Comptroller,  according to reports had made a seizure of 4 X 4 , Containers laden with  unregistered  Pharmaceuticals drugs, 674 cartons of Tramadol and 805 cartons of Codeine syrup at APMT and SIFAX  bonded terminal3, respectively. The Duty Paid Value , DPV,of the seized Pharmaceutical drugs was worth about  N1.7 billion.

Comptroller Yusuf and his officers may have extended their hunt for the drug importers to cocain traffickers between the North American country of Brazil,  described as home of cocain marketers and Nigeria, using the Lagos port to take delivery of the Consignment.

He may have been influenced to hunt for the cocain arons, following the interception  of 40 parcels of cocain weighing  43.1 KG, with an estimated  street value of  over N32 billion at Tin can Island port , last February, NDLEA, operatives who were said to  have acted on information.

Being proactive,  the Apapa Customs Comptroller and his officers in Collaboration  with the NDLEA  operatives were said to have  nabbed a drug baron , one Ejiofor  Felix, who was said to have smuggled into the country 27.95 Kg of cocain  which according to experts have street market value of N8 billion on May 14, 2021. The seizure of these unregistered Pharmaceutical drugs  and cocain  at the Apapa port , between February and May 14, 2021, may have sent a signal to the smugglers that Apapa port under the close watch of  the no nonsense Yusuf,  an ICT, expert, is a no go area, meaning that whatever tactics employed by the traffickers to hide their drugs , the Apapa Command  and NDLEA operatives are waiting for them.

iInformed sources, told The Value News that the Apapa Customs Comptroller , may have made  a bold Statement last February that the battle line  have been drawn  with the drug traffickers when he read the riot Act to the Unit and Terminal Heads  and their officers to ensure that the right thing is done.

. He was said to have made it clear to the officers that he will not tolerate any form of indiscipline, insisting that’’ officers must be alive to their duties’’. As an ICT , guru. He had beamed his search light on the Examination and releasing officers at the terminals including the officers  at exit gate to ensure that  the officers are not Compromised by the fraudulent importers with their gents who have the money  to waste  to get their illicit  goods out of the   port.

Another thing  that may have  helped the Apapa Comptroller in the last three months to deal with the unregistered NAFDAC, Pharmaceutical importers, particular, Tramadol and Codein,  and cocain syndicate was the tight security and Close Circuit Television, CCTV, mounted at strategic location in  his office which makes it possible for  him to effectively monitor the movement of Containers from the port to the terminals

. Importers with their agents who were said to have connived with some officers to step down their Containers in designated terminals  to facilitate their delivery were said to have cried out as they could no longer have their way for playing into the hands of Comptroller Yusuf.

Given his determination to ensure that the Command collects the appropriate revenue  from  the over 70% volume of cargoes that passes  through the port annually, in  order  at its top position of the highest evenue generating Customs Formation, the Apapa Customs boss was said to have been holding regular meetings and Consultations with the Deputy Comptroller, Evaluation, and other senior officers to review that plans of action which have helped in blocking areas of  revenue leakage at the port This is evident going by the N65.463 billion collected by the Command in the month of April. Information filtering out from the Command , shows that the  revenue generated in the month of May, 2021, was much higher than the previous month as all loopholes of revenue Leakage have been blocked  by the Yusuf and his men.

. The Enforcement  and Exit gate officers, were said to have been on the alert to ensure that imported cargoes which contravenes the CEMA, are seized and evacuated to Ikorodu Lighter Terminal,, IKLT, used for warehousing government   overtime cargoes for auction.

This is evident going by the Command recent application to the Nigerian Pots Authority, NPA, for the evacuation of 82 seized Containers in the categories of‘’20’’ and ‘’40’’,  over alleged false declaration, wrong  classification, Concealment and underpayment to the ILT, in order to create space to accommodate other new arrivals at the port and terminals .An insider informed the Magazine that Comptroller who  is still pushing  to ensure that the  seized Containers are evacuated to IKLT, without further delay as more ships have contined to discharge Containers at the port virtually on a daily basis have not relented.

The Magazine had sought to know from the Apapa Customs Comptroller  on Tuesday, June 8, 2021, why despite the tight security mounted at the port by him and his officers, the Comptroller General of Customs, CGC, Strike Force, under the close watch of Ahmadu Shuaibu,  has continued to make Container seizures at the terminals under the control of the Command.

Comptroller Yusuf who could not take it  had  Lambasted the  Magazine for the  lack of knowledge over the clearing process at the port . He had made The Magazine to   understand that for any interventionist unit operatives  to come into the port and make  any  Container seizure, a Joint Examination must be carried out on the Consignment.

T But the question on the lips of most people , was how  the CGC  Strike Force, Zone A,  made all the  Containerised cargo seizures  that had been ,evacuated to ILT, which were mostly from the Apap port  and terminals under its control . Valuation experts had put the seized  Containerised cargoes at about N338.67million in the month of May, 2021, alone.  According to Shuaibu, a Deputy Comptroller and the CGC Strike Force Coordinator, Team A, the seizures  was  due ‘’to series  of Contraventions on some sections of CEMA’’

. He had pointed out that the seizures, by the interventionist  unit was  facilitated by  ‘’Credible intelligence and Meticulous documentary checks’’ . The Contraband goods that were said to have been found in the seized Containers by the CGC Strike Force  Team A, boss, included 575 bales  of second hand Clothing, 1,440, cartons OF Super market goods, 664 cartons of  unregistered NAFDAC, pharmaceutical drugs and 530 cartons of Foot wears.

Many will want Comptroller Yusuf to work closely with the CGC Strike Force Team  A, Coordinator, who works whose works are based on intelligence gathering  to force the importers to be more compliant in their declarations to guarantee payment of appropriate duties.   There are indications that billions of naira enter into   private pockets  at the ports on a yearly basis.

The CGC Strike Force ,Team A, recovered  revenue from the Non –Compliant   importers who make under-payment with the support of their Customs Collaborators  in the last five months which runs into billons of naira speaks volume.  Much of the money had been recovered from AMT and other Apapa Customs Command controlled Terminals.