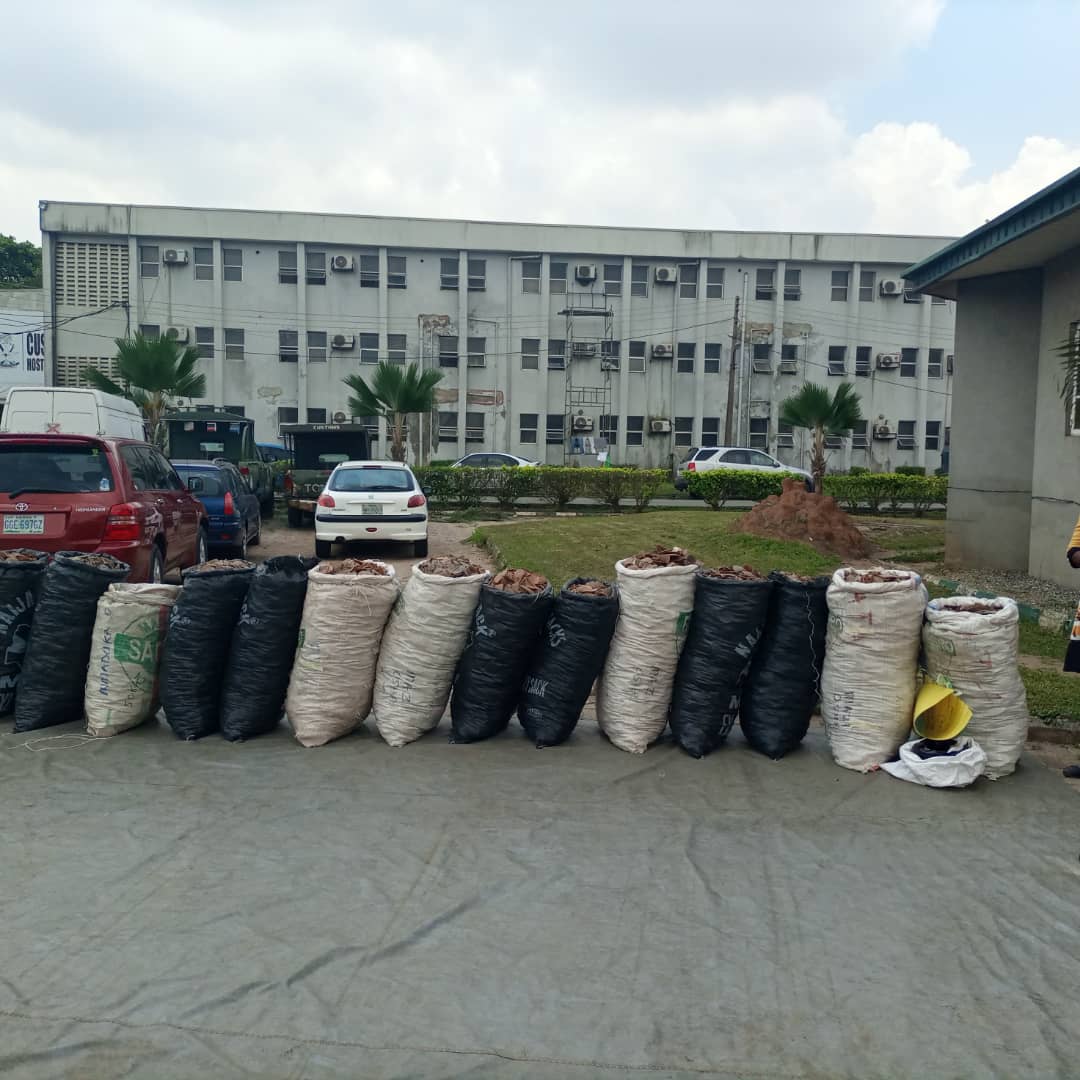 For years, there have been rumours making  the rounds that the Hameed Ali, a retired army Colonel, led Nigerian Customs Service, NCS, Pangolin Scales and Elephants Tusks  seizures  had entered into the wrong hands. The rumour became pronounced because  nothing have been heard about the Wild Life Items after the National Environmental Standards and Regulations Environment Agency, NESREA, took delivery of it from the Customs Authorities.

But  Oluyemi Babajide, Coordinator, of the  National Action Plan, of  The  Convention  on International Trade In Endangered Species  and Wild Fauna and Flora, CITES, in the Federal  ministry of Environment  who  was at the Headquarters Strike Force, Team A, under the close watch of Ahmad Shuaibu,  a Deputy Comptroller, at its Operational base at the Customs Training College, Ikeja, Lagos, the nation’s Commercial nerve centre, on October, 3, 2021, to witness the display of  yet, another Pangolin Scales and Pangolin Claws seizures by the Customs  adhoc Team, had said that’’ the Pangolin seizures are in safe hands’’.

He had said that Mohammad Mahmood Abubakar, minister of Environment, has written Letters to NESREA, to make all the necessary arrangement for the destruction of the Pangolin Scales and Elephant Tusks   that had been handed over to it by NCS.  However, he disclosed that the destruction of the wild Life Pangolin Scales and Elephant Tusks would not be a closely guided secret as it would be made public, with the involvement of the Media , to Cover it.

Ali, the Customs Comptroller General, who was represented by Joseph Attah, a Deputy Comptroller and the Service  National  Public Relations Officer,  to showcase the seized  Pangolin scales , which came in different sizes of between 35Kg,  50Kg,  60Kg ,  to 1,009.5 Kg  and Pangolin Claws  which came in 5Kg, size,  with a  Cumulative Duty Paid Value of N1,728,788,750.00, was said to have been intercepted  along Kudiract Abiola Way, Oregun, Ikeja, Lagos.

Given an insider information how the sacks of Pangolin Scales and Pangolin Claws were intercepted, Attah, disclosed that the Customs had acted on credible intelligence , provided  by its international partners.It is instructive to note that ‘’the NCS,  has been in robust  Collaboration  with the Embassies of the United Kingdom, UK, the North American country of the United States, US, Germany and  other Credible International  Organisations already indicating interest to join in their quarterly meetings and provide platform  for shared experiences’’.

The Collaboration may have become possible because Nigeria is a Signatory to CITES.  Many believe that the  extensive Collaboration  may have triggered the same Customs International partners and Wild Life Justice Commission  to encourage the Customs Authorities   to deploy its Intelligence Operatives and the Shuaibu , led Headquarters Strike Force Team, A, to arrest members of the gang, using Nigeria , as a transit for the illegal trade. This may have resulted to the interception of a Mercedes Bus with Registration Number BGT 256 Lg, loaded with the 15 sacks of various sizes Pangolin Scales and a sack of Pangolin Claws, early last month.

Attah may have spoken the mind of the Customs Comptroller General when he’’ Commended the Wild Life Justice Commission for their continued strong Commitment ‘’to this crackdown on the illegal wild Life trade through provision of credible and actionable intelligence, including technical aids’’ to the NCS, in order to do their job.  He may have gladdened the heart of the officials of the Embassies and other International Partners when he unbareed his mind that ‘’the NCS appreciates the working synergy and looks forward for more of such Collaborations in the future’’.

Deputy Comptroller, Shuaibu , the Coordinator, of the Headquarters Strike Force Team A, may have sent a message to  the Foreign Pangolin buyers and their Nigerian Collaborators that it is no longer going to be business as usual with ‘’the arrest of two suspects in connection with the sacks of Pangolin Scales and Pangolin Claws  seizures, who according to Attah, the Customs spokesperson  would be charged to Court ‘’to answer for their Crime’’.

Recall that last August,  the Headquarters Strike Force Team, A,   had intercepted  and seized  around the Lekki axis, a high brown area of Lagos Metropolis, nine sacks of Pangolin Scales and Elephant Tusks ,valued at about N22 billion. The Customs adhoc , Team,  and Customs Intelligence Unit, CIU,  Operatives,  who had gone for the Operation, had arrested three Non-Nigerian suspects .

The arrested members of the gang included one Traore Dkomba, Isiak Musa and Mohhammed Bereta. But the Leader, one Berete Morybinet, had escaped arrest forcing Ali, the Customs Comptroller General, to send out messages to security agencies personnel at the nation’s Land borders, across the country to tighten up security at the borders to ensure that he did not leave the country.

The Customs Comptroller General was said to have done everything within his powers to catch the run- away Leader of the illicit Wild Life trade gang, using his military intelligence but that was how far, he could go.The arrested three suspects who are already in Police custody, were said to have charged to Court for trial were said to have  appeared twice in Court with full Media Coverage. That much was confirmed by Attah, the Customs Image maker.