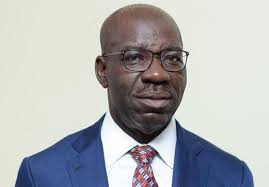 When Adams Oshimhole , a former National Chairman of the All Progressive Congress, APC, who incidentally was a two  -term governor of  the south –south state of Edo, forced Godwin Obaseki, the party elected governor of the state to decamp to the People’s Democratic Party, PDP, he may have had at the back of his mind that he is finished  politically having withdrawn his support from him.

The former APC  National Chairman, in order  to spite Obaseki, his estranged god son , had thrown up , Osagie Ize-Iyamu, a Clergy man and a former PDP governorship Candidate  in the 2015, election to pick the APC, governorship ticket for the Sepember 19,  election in the state.

Obaseki’s disqualification from contesting the party primaries at the instance of Oshiomhole  may  have climaxed a long –run battle  between the duo.  The Edo state governor who  was forced to decamp to the PDP, to test his political  popularity in the state  without the support of Oshiomhole was said to have linked up to Nyesom Wike, governor of Rivers state and Udom Emmanuel, his Counterpart in Akwa Ibom state , to prepare the ground for  him to join the  PDP.

Note that the APC 7-man, screening Committee  headed  Ayuba Jonathan , a Professor, had picked holes  with the National Youth Service Certificate, NYSC, and testimonial of the Institute of Continuing Educaton Center, Benin, the Edo state Capital , presented  by the elected APC governor to the Committee.

The disqualification of Obaseki by the party screening Committee may have opened the door way for the PDP to grab him.  Wike , the Rivers state governor  and Emmanuel , the governor of Akwa Ibom state were said to have softened the ground  for him to join the PDP to actualize his political ambition. The two south- south  states governors were  said to have  ensure  that he was granted waivers which worked for  his favour as some of the party  governorship Candidates  stepped down for him  after much pressure from several quarters. It was not surprising why  he emerged as the party governorship ticket for the September 19, 2020 , governorship election in the state with ease.

Obaseki , may not have seen Ize-Iyamu, the APC Candidate as a  threat to his re-election bid. This is because of his believe that Oshiomhole  who  is backing him  was a spent force and no more of any political relevance in the state. Oshiomhole , may have known that the APC , will lose Edo state, if Obaseki , eventually  decamp to the PDP, and pick their governorship slot.  He had threatened to go to Court   to  challenge  his estranged god son’s Certificate if he is fielded by the Opposition PDP in the September 19, 2020, governorship in the state but that was how he could go.

Instead of going to Court to Challenge Obaseki who had had picked the PDP, ticket, Oshiomhole became the victm   as he was  removed by the Court as APC , National Chairman.  Obaseki had described the Court of  the former goveror as the APC National Chairman as a good riddance to bad rubbish.  He believes that if he could defeat Ize-Iyamu, the then PDP , governorship Candidate  in the state in 2015, he will still defeat him again in September 19, 2020 with little or no worry.

Many believe that the APC, leadership, in the state  may have been banking on the party control of the country security apparatus of the country  as the ruling party to win the election. Recall that Adamu Mohammed, the Inspector General of Police , IGP, had deployed 31,00 policemen  to maintain security in the Edo election. Unknown to the APC party thugs and their sponsors, Mahmood Yakubu, a Professor and Chairman of the Independent National Electoral  Commission,INEC, had  introduced  some new innovations in the electoral process that would make it difficult  for any party to rig the Edo election

.  This is because all announced results at the Collation centers  in the  each local government Areas are transmitted to the Commission server before being taken to  the state  Collation center in Benin city for final announcement by the electoral umpire appointed Returning officer.

Some of the new innovations that were said to have been  introduced for the Edo governorship election  was the use of the  tablet, Z-pad  as secondary means of achieving full biometric  accreditation of voters using the facial image of the voter, in support of the finger print  authentication  by the Smart Card Reader that were not used. This may have finally sealed Oshiomhole’s hope of installing Ize-Iyamu, as the next governor of  Edo state.

Moreso, Festus Okoye,  the INEC Commissioner  for Voters  Education  and Publicity,  may have further dashed the  hope of the party tugs and their sponsors of rigging the election when he disclosed other measures  put in place  to ensure  a smooth run  for the Edo governorship election by the electoral umpire.The Commission spokesperson  was emphatic  when  he said that’’ any voter who comes to the polling unit after 23.0 pm, will not be allowed to join the queque to vote’’.  This may have informed why thousands of voters  in the state were disfranchised. It was not surprising why there was violence erupted in Esako North in the state where thousands of voters , alleged to be APC, supporters were disfranchised.

Godswill Alan  Lukman, a Professor and Collation officer of Esako Central Local Government Area  Confirmed that one of the INEC, officials was shot and critically  injured while the electorate were voting on Saturday. The Professor had said that   the incident had t occurred due to  violence  that erupted  at the venue of the election. He disclosed that another   ad-hoc  official of the Commission  was cut in the face .

According to the Professor,  the  hoodlums who were suspected  thugs  had stormed  the venue  of the election and disrupted the exercise, forcing the voters to scamper for safety. He noted that the election could not be concluded in the area.

The PDP officials, believe that APC,  thugs master-minded the violence in the Esako central local government Area  to disrupt the election  because the party was losing . The  party  had  raised alarm  about  the  disappearance of the INEC  Collation officer for the Local Government.  The party Leadership were said to have been alerted about the disappearance of the INEC Collation officer by  one Omoregie Ogbide- Ihama, an Agent of the party on Sunday, Setpember 20, 20, as the results of the election  started trickling in into  Benin City, the state Capital, Collation Center  for final announcement by the Returning officer.

The PDP Agent had said that  the Collation officer  for the Esako Central local government  was with them  at the Collation  center  but failed to return to the venue  after a one hour break announced by the Returning officer. Going by the results from the 13 local government government Areas that  were announced by  Akpofure Rem-Rukah, the INEC , returning officer, earlier on Sunday, Setember 20, 2020, out of the 18 local government Areas of the state,  it was obvious that Oshiomhole and his new found political ally, Ize-Iyamu, the APC, governorship Candidate , have lost the election, which many believe would force Oshiomhole into political retirement. without benefits.

Going by the final result of the Edo  governorship election that had been released by the INEC Returning officer,  Obaseki, the PDP  Candidate  polled a total of 307,955 votes to Ize-Iyamu’s223,619 votes. With the total votes scored,  which cut across all the local government Areas of the state, the Returning officer had declared Obaseki,  the PDP Candidate  as the winner of the Sptember 19, 2020, governorship in the Niger Delta state of Edo, today, September 20, 2020, amidst Celebration in Obaseki’s Camp. A total of 14  political  parties were said to fielded Candidates for the election.   An elated  Obaseki said the ‘’the outcome of the election  in the state   is a reflection  of the will of the Edo people’’.

He gave kudo’s to President Muhammadu Buhari for defending the country’s Democracy following the good job done by the INEC oficials and the policemen deployed to the state to perform their Constitutional role  of maintain security during the election.

This is the first election to be conducted in the country since the outbreak of the Wuhan Town in Hebei Province of the Asian country of China emerged coronavirus, popular COVID 19, last March.