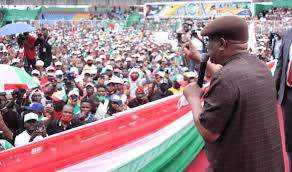 Uche Secondus, the Rivers state born National Chairman of the People’s Democratic Party, PDP, appears to have used the hard fighting Nyensom Wike, a Lawyer and governor of the oil rich south-south  state of to restore life to the sinking national party in securing victory for the party  in the just concluded governorship election in Edo state.

Secondus and the party National Executive Council Committee, NEC, members, may have done their homework to come to the conclusion that the  only  person that could match the ruggedness  of Adams Oshiomhole , a one –time governor of Edo and the  Court sacked former National Chairman of the All Progressive Congress, APC,  and ensure that the wish of the people prevail was to appoint Wike as the Chairmman of the party Campaign Council in the September 19, 2020 Edo governorship election is to appoint Wike, as party , Chairman, of the Campaign Council for the Edo election.

His presence  in Benin on Friday, September, 18, 2020, to carry out his party mandate was said to  have electrified the state and equally  strengthened  the resolve of the electorate to come out in en-masse to  vote for the Candidate of their choice in the election and  defend their vote .

Adamu Mohammed, the Inspector General of Police, IGP, who had deployed 31,000 , policemen, to the state to enforce  the restriction  order during the election may not have been  pleased at the presence of  the  Rivers state governor  in the state that he had  ordered him to leave the state.

The governor may have raised the awareness of the people about the importance of the    election when he urged them to come come out  en-masse to vote for the Candidate of their choice.  The PDP governor was said to have  advised the   electorate  to be vigilant  to protect their votes.  Note that the Statement, which was  considered inflammatory in security circles, may have informed why Mohammed, the IGP, took the bold initiative to order Wike to leave the state.

The IGP’s matching order to the Rivers governor to leave the Niger Delta state, which was quickly followed with the deployment of some 300 heavily armed policemen who laid  siege  in the hotel he had lodged in Benin City  to forestall any contact   with the people, may have drawn sympathy for  the PDP, and Obaseki, its governorship Candidate in  the state

The IGP’S matching order given  to Wike, to leave the Niger Delta state  may have forced the electorates  who were sitting on  the fence to make up their mind to support the PDP and the governorship Candidate in the September 19, 202020.

True to the PDP NEC, Calculation, the appointment Wike, the Rivers state governor  to overssee the Edo Election on behalf of the paarty to ensure that it is free and fair, as promised by INEC, may have disarmed Oshiomhole, a one- time Labour activist who had turned himself as the godfather of  Edo politics to display all the known political tactics to ensure that  Osagie Ize-Iyamu, a Clergy man , emerge as the next governor of the state in the September 19, 2020, governorship election .

The fallout was that  he could not deliver the five local government Areas in the Edo North to Ize-Iyamu, his alleged godson because of the close marking giving to him by the PDP, officials. An elated Wike had declared after the confirmed result was released that God had used Godwin Obaseki to end the godfatherism  in Edo politics’’.

Expressing his feelings Like an Army General who had conquered  an enemy in the warfront , the Rivers state governor had made people to understand that,  if for nothing the party has achieved ‘’ that there is  nothing called  godfatherism in Edo politics’’, while introducing the newest PDP, governor to the people of the state.

It was a strong message  to Asiwaju Ahmed Tinubu, a former  governor of Lagos state, who pride himself as the godfather of south west politics, that the era of godfatherism, in Nigeria politics has come to an end . Wike , who could not hide his feelings had said to the hearing of Osshiomhole and his followers:  Edo people have said , look we cannot  altar our fate on one man’s hand.

In announcing the Edo governorship election result, amidst tension in the state, Akpofure Rem-Rukeh, a Professor and Chancellor of University of Petroleum Resources, Effurum , Warri, who incidentally is the INEC , appointed Returning officer for the election, said Obaseki, the PDP, Candidate  polled 307,955 votes to Ize-Iyamu, his closest rival and the Candidate of  the APC’ s 223,619 votes, thus making him the winne of the election.

The University of Petroleum Resources, Effurm-Warri, Chancellor, had said in the fully filled Collation center, Benin city, the state Capital that Obaseki, the PDP Candidate had’’ satisfied all  the requirements of the Law in meeting the 25% in two-third of the 18 local government Areas in the state’’. According to the Professor,  the  PDP Candidate   had ’’a margin of lead  higher than the cancelled votes’’.

In spite of the general consensus that the Edo state   governorship election was Free and Fair the APC, officials were  said to have  rejected the result , alleging ‘’strong- arms tactics’’. John Mayaki, the party Chairman of the  Media Campaign Council had issued a Statement  alleging that   its supporters were arbitrarily arrested’’, stressing that ‘’many of the election figures bandied about for the PDP,   were fabricated’’.

The party had  alleged ’’illicit tampering  with the results, to shore up Obaseki, the PDP Candidate’s figures  BUT mark down, that of the APC’s Candidate’’.  ‘’ Areas where we had won, the INEC officials cancelled them, the party officials  had  remarked.

More worrisome was their complain that the electoral umpire officials  had decreased the party  votes in areas where it  had an advantage and jerked up the  PDP figures. There are indications that the party have assembled   a legal Team to head to the Election Tribunal and the  Court to challenge the Edo election result.

The question on the lips of most was: how could the PDP officials in the state could have  penetrated the ranks of the INEC officials in the state and the security agencies personnel, particular, the police, when the ruling APC, controls the country’s security architecture: the police, Military , Department of State Security, DSS, and other security agencies  that could have  helped  the party secure victory in the governorship  by intimidating the opposition party supporters.

Political watchers  were said to have advised Ize-Iyamu , the PDP Candidate , and Oshiomhole , his alleged  godfather, not see themselves  as  bad loser  but in the spirit od sportsmanship, Congratulate the the PDP Candidate , who had been declared winner of  the keenly contested elections.

Ever since the Rem-Rukah, the Edo governorship Election  Returning officer, announced Obaseki as the winner of the  election, congratulatory messages from different quarters in the country had continued to be sent to him from Nigerians.

President Muhammadu Buhari, of the ruling APC, appears to have opened the floodgate of the congratulatory  messages to the Edo state re-elected governor  when he  urged him ‘’to continue to show humility in victory’’. The Katsina state born Nigerian President , in a Statement issued by  by Garba Shehu, Senior Specia Assistant, Media and Publicity  had said  that the President had Commended  the election process in Edo state  that had  produced Obaseki as the governor, reiterating  the government’s determination to a free and fair elections. Garba , may have spoken the mind of the President, when he said’’ that without free and fair elections  the foundation of the country’s  political and moral authority will be weak’’.

Atiku Abubakar, a former Vice President and Presidential Cnadidate of the PDP, in the 2019, general elections, who Commended Obaseki for his victory , was said to have also appreciated the people ”for their resilience in the face of the forces against them”. He had described the Edo state governor’s victory at the September 19 elections, ”not only as a victory but a declaration of independennce from antidemocrattic forces of godfatherism and militarism”.

Ben Ayade, a Professor  and governor of Cross river state, and  four other governors of the PDP, were said to have also sent congratulatory message to Obaseki, described as   a giant killer,  who  had emerged as the newest   governor in Nigeria .

Ndudi Elumelu, the Minority Leader of the Femi Gbajabiamila led House of Representatives may have  shown his happiness  over the re-election  of Obaseki  as the governor of Edo stat in an election  contested by 14 political parties that had  fielded Candidates by equally sending a congratulatory message to the governor-elect.

Elumelu had  attributed  the victory  to the governor’s ‘’sterling performance  in his first term in office  in developing  the state  and empowering the people’’.  The Lawmaker was said to have  also  appreciated  the people of the state   for’’the courage exhibited in coming out en-masse not only to vote  but also to protect their votes and monitor the process to the end’’. The PDP Caucus in the House were said to  have also Congratulated Obaseki,  t, describing his victory   ‘’as a reflection  of the people’s will to elect a credible a leader that  that will serve them and not a few’’.

Political Observers believe that with the successful conduct of the Edo state governorship election,  by INEC, and role played by the police to remain non- partisan,  the  Electoral umpire has sent a signal to politicians plotting to rig themselves into power in 2023, to watch their step as it may be very difficult to rig the election.

This is because the Commission have continued to introduce new innovations on how to conduct a free and fair  elections in the country  based on what is happening in the North American  country of the United States, US, where Democracy had taken firm root.