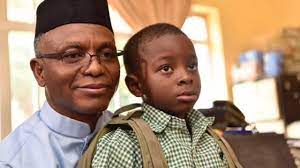 When Nasir El-Rufai, a former minister of the Federal Capital Territory, FCT, during Presiden Olusegun Obasanjo Presidency and now governor of the north west state of Kaduna, withdrew his children from a public school in Kaduna , last two  years  when security operatives intercepted  two Bandit groups  planning to attack the school and kidnap Abubakar El-Rufai, his six year-old son many people knew that there was fire on the mountain.

The one –time fearless governor of Kaduna state had confirmed to the BBC, Housa service in an interview on Friday, July 2, 2021, that he had withdrawn his children from a public school in Kaduna when information filtered out that  the plot by the two  Bandit groups  and their agents to attack the public school was targeted  at Abubakar, his six year –old son to force him to pay a huge ransom to facilitate his release.

.  This may have informed why he hurriedly  in September , 2019, enrolled, the  six year-old son and Nassrine, his younger sister, who also turned six years  into   Kaduna Capital school, a public school located in the heart of  city, because of the tight security to escape the Bandits kidnap plot.

Instead of withdrawing the two children from the public school that is exposed to Bandits attack because of the lack of effective security, many had expected the governor to work closely with the security Chiefs in the state to tighten up security in the public schools   when he noticed that the Bandits had turned their attention to attacking schools in order to kidnap pupils and students.

There is no gainsaying the fact that by  withdrawing  his two children  from the public  school in Kaduna because of lack of  security around school to where there is tight security, he  was sending  a message  to the people of the state that his concern is to ensure that his own children are protected   in their schools, leaving other  children  exposed to the attack of the Bandits  in their respective schools to their  own  fate.

Although, he had said that  he withdrew his two children from the public school  in order  ‘’to show them Leadership to revamp  public education  in the state and make it more Competitive’’ as leaders, an indication that he was already preparing his own children, particular, his six year-old son for the Leadership position of the state in the future.

He was said to have further said that  that his family ‘’took the decision  to withdraw  the son and the daughter from the public school in Kaduna on the advice  of security agents, in order not to put the school at risk, of being attacked by Bandits, for ransom.

An agitated governor El-Rufai, had said  that the six –old son and the daughter are currently at home school  and are only going  to the Capital school, based on arrangement to write their exams. He is optimistic that the children would return back to the school as soon as the security situation in the state and the public school improves.

The continuous attack on schools in the state in the recent time has shown that the security situation has not improved and the hope of his two children going back to Capital school to continue their studies remain slim.   He was said to have cried out to Farouk Yahaya, a Major General and Chief of Army Staff, COAS, to deploy more troops to the state to effectively wipe out  the Bandits who are working closely with the Islamic Fundamentalist Group BokoHaram and the Islamic State of West African Province, ISWAP, to make the state ungovernable.

The Kaduna state governor’s fear of taking back the  two children to  Capital city public school may be justified as the security personnel  have not found solution to stop kidnapping , meaning that no part of the state is safe from the Bandits attack.

Only recently, three Bandit gangs were said to have killed seven people and kidnapped ten others in separate attacks carried out in different Communities at Chikun, Kajuru and Giwa, described as flash point  Local government areas in the state.

An eyewitness account at Iri station  in Kajuru Local government  had said that the Bandits  in their tens  had stormed  the Community  around 10.am armed with sophisticated weapons and were shooting indiscrimately, forcing the residents to run helter-skelter  for their safety. He confirmed that he Bandits succeeded in abducting 10 persons from the Community to an unknown location while two other people were killed.   The aggrieved Iri station resident would want Major General Yahaya, the COAS, to listen to the cry of El-Rufai, the state governor,   to beef up security in the state by deploying more troops  in the flashpoint Local government areas.

Samuel Aruwan, the state Commissioner for Internal security and Home Affairs, who was said to have led  security operatives  to the affected Communities  in the three Local government s area on Saturday, July 2, 2021, had said that the government which is working closely with  the security agencies  will do everything  possible  to arrest the per perpetrators of the attack and the killings in the Communities  in order to put a stop to it.

Despite the repeated attacks in Communities in the state by the Bandits to force the reluctant El-Rufai, the Kaduna state governor to Negotiate with the Bandits to force them to sheath their sword and stop further attacks on the people,   the governor , who may have been pushed to the wall had ‘’vowed that  that he would not Negotiate with the Bandits or pay ransom  to secure the release  of the ten fresh abducted persons in the state.

Recall that the inseurity situation was so bad in Zamfara state, described as the home of the Bandits, that Bello Matawalle, the state, who has decamped from the Opposition People’s Democratic Party, PDPD,  to the ruling All Progressive Congress, APC,  on the promptings of President Muhammadu Buhari, a retired army  General, if he actually wants the support of the Federal government  to effectively deal with the Bandits in the state, to have  urged the people to defend themselves.

Even Aminu Masari, the governor of Katsina, the retired army General, home state  had said that it is ridiculous that the people could not defend themselves but always crying out  for government  for support whenever the Bandits struck since they could no longer’’ rely on the police to do so’’.