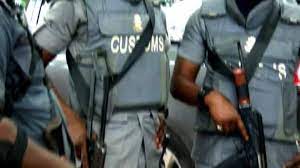 Barely one month after Kehinde   Hussein Ejibunu, a Deputy Comptroller and acting Controller, Federal Operations Unit, FOU, Zone A,  visited Peter Kolo, Comptroller Idiroko Command, which is basically an anti-smuggling Unit, and who had accompanied him to Ipokia, Owode and other border Communities in Ogun state, ona Courtesy call on the Traditional rulers and the Chiefs, a bloody clash had occured between the Command Operations and Lagos Roving Patrol Team  and the Smugglers At the Shagamu Inter-change , in the state.

With the bloody Clash with the Ejibunu Enforcement officers, at the Sagamu Inter-change on Saturday, October, October 16, 2021, the die –hard Ogun smugglers appear to have sent a message to the Customs acting Comptroller that the Paramount Rulers and Chiefs at the border Communities do not have the powers to control their activities, let alone stop them. Perhaps, this may have informed why they have gone back to the drawing board to restrategise to beat Customs Operatives to it by taking advantage of the numerous border routes in the state to do their illegal business with their Customs Collaborators .

A former Comptroller of the Ogun I, Command, had said that there are over 100 illegal routes used by  the smugglers to carry out their illegal trade that are scattered all over the state. There is no gain saying the fact that the FOU, Zone A, Operations and Lagos Roving Patrol Team officers, over the years, haD remained a stumbling block to the smugglers, which may have informed why  the frequent violent clash with the smugglers with their supporters at the Sagamu inter-change .

The Ogun state foreign par boiled rice smugglers may have waited for Deputy Comptroller, Ejibunu, who had made arms Cateridge seizures at Igboora, in Oyo state, in the recent time, to settle down before coming out  in full force to show their true colour.

Note that during his recent visit to the Paramount Rulers and Chiefs at the border Communities, one of the Monarchs, Oba kehinde Gbadewole, the Olu of Ilaro, a notorious border Community, and who incidentally is the Paramount Ruler of Yewa Kingdom, may have spoken the mind of other Paramount Rulers , when he told the Customs acting Comptroller that ”it would be difficult to control the activities of the smugglers in the state” . Hear him: there is no established Borders in YewaLand and the borders are porous.  The Yewa Paramount Ruler  had informed the FOU, Zone A, Customs boss, not ‘’to expect  a hundred percent  compliance by the people to stop smuggling  in the state when there are too many porous borders, coupled with the fact that the officers stationed at the border Communities are working  under strenuous conditions’’, which makes it possible for them to be Compromised.

In spite of the fact that there are too many illegal border routes in the Former President Olusegun Obasanjo, home state, many had expected that with the tight security and numerous Customs and other security agencies checkpoints around the border Areas and along the Abeokuta and Shagamu Express way  the smugglers would find it difficult to enter the road with their smuggled Foreign par boiled rice  to sell at the Lagos markets. They may have been encouraged by the officers at the Checkpoints and Patrol Teams that mount temporary roadblock to do so after collecting their booking money.

But what they had failed to understand was the fact that the Command Operations and Lagos Roving, Patrol Teams which act on information and with the support of the Area Controller, could strike without warning. The recent bloody clash between the Team  under the close watch of Assistant Comptroller Jack  Okpabi, criss-crossing the entire  south west geopolitical region states of Lagos, Ogun, Oyo, Osun, Ekiti and Ondo, to checkmate the smugglers was not  unexpected.

The die hard Ogun  smugglers, using the Abeokuta, the Ogun state Capital and Sagamu Inter-change to convey their  smuggled foreign par boiled rice into the Lagos market  who may have gone underground, after last February bloody clash with the Team, may have resurfaced to do what they knew best to do.

The smugglers  who had  entered the  Abeokuta and Sagamu Express way after beating the various Customs Checkpoints on the road. It was not surprising why they had played into the Command operations and Lagos Roving Tam officers had , around the Sagamu Inter-change that had disrupted their movement as they disposed them of  their 12 vehicles  load of smuggled foreign rice,  amidst  gun dual.

Recall that one person was confirmed killed in the bloody clash while other persons, including a Customs officer, an Army officer and three smugglers, were said to have received serious bullet wounds during the gun dual which left the road deserted by motorists.

This time around, the smugglers, never expected to encounter any opposition from the Command Operations and Lagos Patrol Team at the Sagamu Inter-change , having made all the necessary  arrangement and ensured that the information about their coming out with their smuggled goods and means of conveyance never leaked out.

This may have informed why they had made the attempt to smuggle into Lagos market the twelve vehicles load of Foreign par boiled rice through Kobape village along Abeokuta –Sagamu road  in the Obafemi-Owode  Local government  Area of Ogun state but fell into the waiting hands of Okpabi’s Team.

Informed sources told The Value News that the FOU, Zone A Team, had acted on information but kept it a closely guided secret. They were said to have mounted Surveillance along the Abeokuta Express way to monitor the movement of the smugglers. When it became obvious that the smugglers had perfected plan to hit the road on Saturday, October 16, 20121, after alleged meeting with the informants, Okpabi, the Customs Assistant Comptroller, and Head of the Command Operations and Lagos Roving was said to have made all the necessary plans for the operations. They were said to have blocked the Sagamu inter-change to frustrate the smugglers who had conveyed large quantities of bags of rice of 50Kg. each, from the neighbouring country of Benin Republic into Nigeria.

An eyewitness account described the Saturday, October 16, 2021, incident at the Shagamu interchange as very bloody as the road was deserted by transporters and other motorists who were scared because of what happened last February when the two parties clashed at the same Location.

A Statement by Theophilou sDuniya, a Deputy Superintendent of Customs and the Command spokesperson in a Statement, confirmed that the Patrol Team intercepted 12 vehicles belonging to the smugglers laden with dozens of bags of foreign par bboiled rice enroute to Lagos but were stopped at the Sagamu  inter-change by the Command Enforcement officers.

The FOU, Zone A, spokesperson, had said that the smugglers had failed in their mission to smuggle the 12 vehicles load of Foreign rice into the Nigerian market. He confirmed that that upon the interception of the smuggled vehicles laden with foreign rice,  some  armed wielding  hoodlums working in support  of the smugglers  mobilized themselves and attacked  the FOU, Zone A, Command Patrol Team officers to prevent them from transferring the intercepted vehicles to their Ikeja premises.

In self defence, the officers were said to have fired back at the smugglers sponsored hoodlums leading to a gun dual. The Customs Patrol Team were said to have overpowered them, thus paving the way to take four of the 12 intercepted vehicles load of smuggled Foreign  rice to the Command Headquarters at Ikeja, Lagos.

The bloody  clash  between the smugglers sponsored hoodlums and the FOU, Zone A, Enforcement Officers, was said to have resulted in three Customs officers and a soldier   sustaining bullet wounds. The good news was that one of the smugglers was arrested and who is helping the Customs Investigation Team in doing their work.

It was  also reported that during the bloody clash at the Sagamu Interchange between the smugglers and the Customs Operatives, two smugglers  fell into the superior fire power of the Customs Enforcement officers but were quickly taken  away by the hoodlums from the scene to an unknown Location in the midst of the confusion.

The bloody clash at the Sgamu Inter-change which had resulted into two deaths and several other people sustaining various degrees of injuries, may  have informed  why angry Abeokuta Foreign rice traders  who may have taken a cue from their Ibadan, Oyo state Capital, Counterparts, stormed, Dapo Abiodun, the state governor’s office at Oke –Mosan,  to protest against the clashbtween the Customs personnel and the smugglers.

The aggrieved traders who could not hide their feelings were said to have asked the state governor to prevent the Customs Enforcement officers at FOU, Zone A, under the close watch of Deputy Comptroller Ejibunu, from future attacks on foreign rice dealers along the Abeokuta-Sagamu Express way.

An insider disclosed that Tokunbo Talabi, the Secretary to the state government had addressed the protesting traders on behalf of the governor, showing their high level of support to the smugglers. Ordinarily the state government officials ought to allied with Hameed Ali, a retired Army Colonel led Customs and his Interventionists Units Personnel to stop the illegal trade instead of giving them his words that   ‘’the government would foot ‘’the medical bills of the four persons who were said to have sustained bullet wounds during the gun duel between the two parties at the Sagamu Inter-change