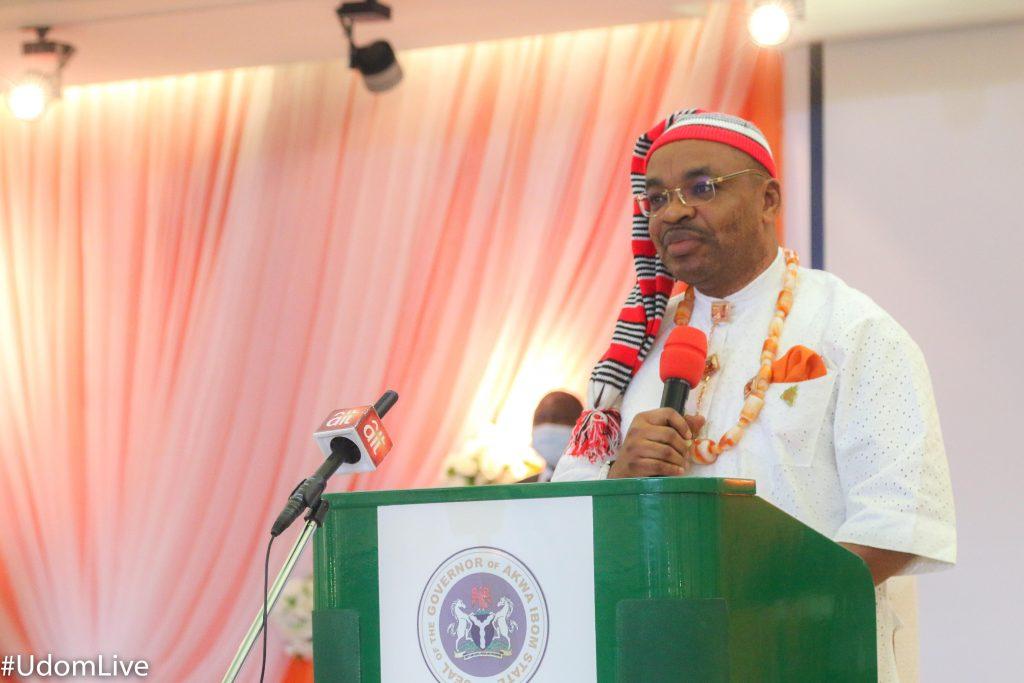 Last Wednesday, September 23, 2020, Governor Udom Emmanuel launched the identity symbols of Akwa Ibom State. The launching of the symbols which included the state Anthem, Flag, Creed and Coat of Arms was part of the activities lined up to commemorate the state 33rd anniversary of the state.

And therefore, as we launch these State’s Symbols and Creed, it is my hope that a new Akwa Ibom identity would be unfurled; an identity of love and unity without the pervading impulse to pull down ourselves or leaders, an identity of unbridled pride in our State and a rejection of the pull  to de-market our State purely for political gains; a new identity coloured by our ingrained nature as  a people who are driven by the communal instinct which demands that we  see ourselves as our brother’s and sister’s keepers; a new identity of our continued honesty and sterling character shaped by the acute understating of the concept of right and wrong and above all, a new identity of our unshakeable faith in God, through whom everything is possible and more.

May these Symbols and Creed liberate us from all the ancient animosities we have entertained against one another and rather open up a new vista of love, togetherness and enduing brotherhood across the length and breathe of this wonderful blessed land of ours”.

The highlight of the event which included the hoisting of the orange, white and green flag of the state by the state governor with a amidst rendition of the state anthem was well applauded by indigenes as a historic event which will put the governors name in gold.

The State Attorney General and Commissioner of Justice, Barrister Uwemedimo Nwoko said the launch of the identity symbols of the state by the governor was a historic event which will add up to the legacies to be left behind by the governor. He added that the well thought out concept by the governor was a manifestation of his person as a visionary leader. Nwoko who is one of the oldest Commissioner in the state executive council having been appointed by former governor Godswill Akpabio and found worthy to be reappointed by Governor Emmanuel since the inception of his administration on May 29, 2015 eulogized the governor for his achievements so far especially in the health, education, infrastructural development, industrialization and the state airline Ibom Air has helped to put the state in the map of developed states in the country. He maintained that at 33, Akwa Ibom has stood tall in the committee of developed states in the country surpassing most of those created before her.

It could be recalled that ahead of the 33rd anniversary of the creation of Akwa Ibom State which was marked on Wednesday September 23, 2020, the state governor had forwarded an executive bill to create and regulate state identity symbols to the Akwa Ibom House of Assembly aimed at instituting distinctive symbols of the state in form of flag, coat of arm and creed.

Anthem, the Unity Anthem which has a special import for the people of the state to be sung at state functions and other special occasions, while the state flag shall be exhibited or flown in all public places in the state.

Similarly, the Coat of Arms which consists of multiple green, orange and white state colours and designs including a lion with a crown symbolizing courage represents the distinctive ideals and aspirations of the people of Akwa Ibom is to be displayed in all public places in the state wherever appropriate alongside the National Coat of Arms of the Federal Republic of Nigeria.

Also, the State Creed consist of the wordings and phrases which represents a  solidarity pledge that will have significance and commitment for the people and will be recited at all public functions in the state. The State Slogan according to the bill shall be “Land of Promise”, while the Creed shall be the Dakkada Creed.

The State Slogan  which was also unveiled with the flag and anthem is “Land of Promise”, while the Creed is the Dakkada Creed.

The state colours which was unveiled an hoisted by the governor in the epoc making event to celebrate the state 33rd anniversary is orange, white and green and the flag bearing the state colours will be mounted side by side with the green white green Nigerian flag.

It could be recalled that on assumption of office in 2015, Governor Emmanuel adopted a slogan Dakkada, which is a clarion call to Akw Ibom people both in Nigeria and diaspora to rise up and build the state together no matter political affiliation and interest.

The events to mark the anniversary which was earlier announced by the Commissioner of Information and Strategy Barrister Ini Ememobong included state broadcast by the governor to the people, unveiling of the state symbols, inauguration of the ultra-modern state Council of Chiefs hall, inauguration of refurbished Emmanuel General Hospital in Eket and road projects in Onna among others.

Akwa Ibom State which was hitherto a part of the then post civil war South- Eastern State created by General Yakubu Gowon military administration and Cross River State, was created on September 23, 1987 by the administration of General Ibrahim Babangida.