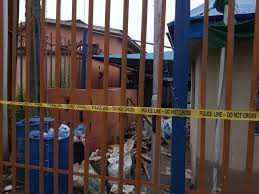 As the war of attrition  in the Association of Nigerian  Licensed Customs Agents, ANLCA, deepens , the brutalised gladiators from the two warring Camps  and other members of the Association  are apparently weary  of the long- drawn battle  may have shown  a sign of fatigue.

The crisis, which  was  said to have started  about three years ago  at the beginning  of the Tony Nwabunike , Managing Director , Mac-Tonel, Nigeria Limited and now President of the Association , has since  not shown any sign  of abasement  as it has remained intractable.

However, some members  of the Association , especially  those who are  vulnerable  and  at the receiving end of the endless crisis, have called on Ozo Chukwura, a high flying  Clearing agent to step in  to douse  the raging conflagration  that the is threatening  to consume the 67 year-old Association, created by an Act of Parliament.

Prince Chukwura, a member of the Council  of Registration  of Freight Forwarding Practice in Nigeria, CRFFN, and a member of the Association Board of Trustees, BOT,  had told Journalists in Lagos   of his ongoing  reconciliatory efforts ‘’ to bring peace in the Nwabunike led ANLCA. He disclosed that he was inspired by his desire for peace and the need  to restore  sanity  to the Association.

Chukwura , who could not hide his feelings had  told The Value News, ’’I do not want  any loss of lives because the crisis  was getting out of hands and if cares  are not not taken , may snowball into bloodletting ’’.  An aggrieved Chkwura, said he was encouraged to take the bold initiative ’’ to take up the  role of a peace maker’’  in the Association despite the obvious challenges that had confronted  him when he visited Tin-can Island  port a few weeks ago.

Given an insider information of the challenges he narrated  how he had walked  into a group of young members of the Association, who  had accosted him . The aggrieved agents who were worried over the crisis  in ANLCA,   were said to have stopped him with a message: ‘Oga you are the only one  we trust  to take up  the role of peace maker to resolve the crisis in ANLCA’.

They were said to have told the CRFFN, Board member that that they absolute Confidence   in his ability and capacity ‘’to bring the two warring camps of the Association together ‘’ to the reconciliatory table ‘’. Thy believe that he could that much  because he has not identified himself  with any of the parties embroiled in the crisis over the last three years but concerned about how to bring about peace.

Giving a further insight to his recent visit to the Tin-can port and the encounter with some of the young members of the Association, he  disclosed that  it was raining that day.  He had said that he was accompanied on the visit  by one Lungu, and Bamidele Shittu, to the port.

Rotimi Amaechi, a former governor of Rivers state and minister of Transportation was said to have been at the port that same day that he was said to have bee s inspired  to take up  the role of  a peace maker in ANLCA.  He noted that though the Association is not new to crisis  but’’ the present one  is unique’’.

While giving a blow –by-blow account  of the genesis of the crisis, Chukwura , had said  that the crisis  was caused  by the desire  of one of the aggrieved parties to take revenge  of the perceived wrong  done  by the other group to its members to  do so.

He disclosed that in the course of his  interaction  with  the aggrieved parties , he had found out that  that the motivating  factor behind  one of the warring groups to cause trouble in the Association  was basically to destabilise  the Administration  of the Tony Nwabunike, to avenge  the wrong  they perceived he did  to them.

He gave instance of  Earnest Elochukwu,  a former President of the Association,  whose Clearing agency  office is located at , PortHarcourt,  Rivers sat, where he takes delivery of his clients cargoes at Onne port, and who calls by his  real name, Ozomena, that we, referring  to the remaining five  members of the CRFFN, Board, , who the Court had  said were not recognized   but later got registered  on one side  and the remaining three,  before Aare Sanni Shittu died, describing them as the bulls  in the China shop’’, meaning people  who causes damage  in situations that requires careful  thinking and behavior.

He maintains that the aggrieved Camp aim in ANLCA, which many believed was championed by Taye Oyeniyi, was essentially to destroy  Nwabunike’s Administration,  in order for members to see him as a non-performer in order render him irrelevant in the forthcoming election to elect the next crop of national Leadership of the Association.

Their anger , according to informed sources was said to have been informed by the fact that  Nwabunike, the ANLCA President,  ‘’terminated  their tenure  as members of the Board of Trustees, BOT, showing signs of his insincerity  purpose  when he was called upon  to intervene  in the crisis  in the BOT’’.

They were engrossed that  that by doing this to them , Nwabunike  had had exposed his  prank, to  run the Affairs of ANLCA, as his personal estate as, he has allowed the crisis  in the Association’s BOT,  to fester to his own advantage. They had said that the crisis in the BOT, had given him the added advantage to ‘’ eventually truncate their tenure’’.

It is not surprisisng why they had resorted to fight back to force the Nwabunike led ANLCA Leadership to reverse his decision to terminate their tenure and return them  back to  office but got it wrong.  ‘’Call it a ‘’tit for that’’or pay- back time’’, remarked an agent.

Chukwurah, a one-time Chairman of Tin can Island Chapter of ANLCA, and who rose to become the zonal Coordinator of the Association  in the south west Chapter had said that  he had reached out to some  of the embittered  gladiators to stop them from sponsoring  the crisis’’ in order to get  their buy-in  into the reconciliatory efforts’’.

He is optimistic that the much expected peace  would soon be  restored to the crisis ridden ANLCA, as some of the major actors  have’’ shown positive signs  of Cooperation with his efforts’’. This may have informed why he has intensified the peace efforts   to organise a  meeting  between the contending parties in the crisis with  the former Presidents of the Association  including Senator Sani Kamba, a former President of the Association  where all the  vexed issues  provoking the crisis   would be looked into  and thoroughly debated to reach  a Consensus reached in order ‘’ to achieve the desired peace’’.

He stated that that there is no one among the gladiators   fomenting the trouble in the Association that does not ‘’want peace, no   matter how they pretend’’, stressing ‘’nobody   has monopoly of violence’’,as  ‘’it has no ethnic coloration but an ill-wind that blows  no one any good’’.

It is not surprising why he had said that ‘’ it is essential to embrace peace because we all have children and relations’’. He may have  an adage from former President Goodluck Jonathan who had said that his blood was not worth any Nigerian when  there was security of plot to throw the country into war if he fails to had over power , the acclaimed winner of the 20215, general over alleged irregularities when  ‘’no ambition  of anyone  is worth  the blood  of any member of the Association’’.

He has vowed to sacrifice  his position as a member of the new  BOT of the Association  if that is all that is required  to bring  to the beleaguered body.