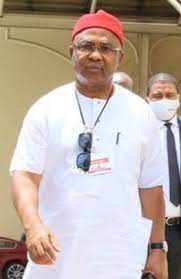 In an emotional outburst  on Monday, May 31, 2021, why talking addressing Journalists,  Hope Uzodimma,  a  one-time Senator of Federal Republic of Nigeria and now governor of the state,  where the Adamawa politician was killed  on Sunday, May 30, 2021, on while heading   to the Sam Mbakwe Airport, Oerri,  to catch a flight had opened up described it as’’ a clear case of political assassination’’.

Giving an insider information of Gulak’s mission in the state, he disclosed that he was on an’’ official assignment’’.   According to him  he had  come to Owerri, the Imo state Capital with the Senate Committee  on Constitutional Amendment’’, noting that ‘’being a humble person,  he chose to travel  incognito’’,  making reference to  the account of a friend who was with him. The question on the lips of most people was  who was that friend who was in the vehicle with him that was not attacked and how close were they? The aggrieved Imo state governor, who believes he had lost a close friend said ‘’someone   must have trailed  him  from  Protea Hotel, Owerri, where he had lodged to the Sam Mbakwe Airport.

The  Cab driver conveying the All Progressive Congress,  APC, Chieftain without Police escort to the Sam Mbakwe  Airport was said to have passed an irregular route , according Baba Elkana, a Deputy Superintendent of Police and spokesperson of Imo state Police Command, . Many believe that he may have taken the irregular route  to beat the traffic at the Owerri  Metropolis but got it wrong.  This is because the attackers were said to have intercepted the Cab carrying the Politician around Umueze Obiangwu in Ngor-Okpala Local government Area of the state which is close to the Airport.

An aggrieved Uzodimma had said that the killers did not’’ remove a pin from him but chose to waste such an innocent man’s blood in such a dastardly and cowardly manner’’. He has ‘’ vowed that those responsible for the Politician’s death will be brought to Justice’’.  It was  not surprising why the  Cab  driver became the first suspect as he was arrested and has been the one  helping the police in their investigations .

Nyensom Wike, the governor of Rivers state believes that Uzodimma, the Imo state, had acted wrongly and was too much in a haste to have declared Gulak’s gruesome murder as a clear case of’’ political Assassination’’  instead of  allowing the security agencies to carry out their investigations to which they were established to do.

Appealing to those in the northern part of the country calling for a  revenge  to exercise restraint, Ahmad Lawan, the Senate President had cautioned them to allow  the relevant security Authorities ‘’ to serve Justice on the matter ‘’ as the injury of the crime  was inflicted on the nation  as a whole’’.  The Senate President was said to have urged the  security Operatives  that all those involved  in the attack and killing of late Gulak  are made’’ to pay for their gruesome deed’’.

Following on the footsteps of Lawan, the Senate President, ex-President Jonathan,  has’’appealed for calm while Law Enforcement agencies  carry out their investigations”.  He described the  late Gulak’’ as a loyal public servant and dedicated Patriot who gave his all in the service of this country’’.

Hear him: he will  be remembered for his modest contributions  to the growth of the nation’s  Democracy , particular, his memorable days  both as a skilful Speaker of Adamawa state House of Assembly and  political Adviser during his Presidency.

Dairus Ishaku, governor of Taraba state,  who  is worried about the increasing spate of insecurity  across the country and the inability of the military and other  security agencies to address the situation says that these are indications that  ‘’Nigeria is dangerously sliding to anarchy and a failed state’’.

It is a disgrace that the military could not flush out the insurgents operating in the north east states of Adamawa, Borno,Yobe and the Bandits in the north west states of Zamfara, Kaduna and Katsina, home state of Preesident Muhammadu Buhari , a retired Army General  and other Criminal gangs in other parts of the country including the armed  Fulani herdsmen operating  in the different parts of the country’’, particular, Benue and Plateau states.  This may have informed why he had said that the country needed ‘’ a  state police which calls for amendment of the 199 Constitution currently in use’’.

John James Akpanudoedehe, a Senator of the Federal Republic of Nigeria and  the APC National Secretary, , caretaker/  Extraordinary Convention Planning Committee, CECPC, has called’’ for national unity  to be able to fight Crimes in the country’’, urging the Police and other security agencies  to leave no stone unturned  in their efforts to track  down  the Gulak killers  and swiftly bring them to Justice.

Femi Falana, a Senior Advocate of Nigeria, SAN, and Human Rights Lawyer, and Falz, his son,  who  may have run out of patience over the rising insecurity in the country had joined the civil society  organisations , labour unions,  and Youth bodies  to protest on Monday , May 31, 2021, in Lagos, the nation’s Commercial nerve cntre.

The CLO , protesters were said to have carried placards with different   inscriptions. They were said to have matched to  the Lagos state Seat of power at Alausa, Ikeja,  and were received by members of the state House of Assembly.  Falana, the legal luminary , may have spoken the mind of the protesters when he said   that ‘’there was need to provide  so that  peace could be guaranteed in the country’’.

He cited the south west geopolitical region which has 54 Universities  as obtained in other regions, churning out graduates daily   and the governments, both at the state and Federal levels ,are not planning for their future.

He was said to have made the Lagos Lawmakers to understand that ‘’without  peace for the poor, there can be no peace for the rich’’.  He has made it clear to the country’s political leadership using the military and other security agencies personnel  to fight insurgency and banditry  in the country, that they must consider it as a top priority  to put all children in school instead of allowing them to roam the streets . An aggrieved Falana,  who could not hide his feelings said Nigeria  is currently characterized  by extreme poverty, arms proliferation, intolerance,  the rise of hate and ethnic nationalism which is gradually moving towards  social upheavals.  He noted that this is due ‘’to exploitation of the people, greed and avarice of spineless political class that has reached its end’’.

Residents of Garuka Communty in Tafa Local Government  Area of Niger state , may have started the protest by the block the Abuja and kaduna road , which interrupted vehicular movement, penultimate week,  over repeated kidnapping of  people in the Community by bandits. They may have embarked on the protest to draw the attention of the Nigerian President and the relevant security operatives  to  take  action.

Even armed Youths   from Zamfara state  had staged a violent  protest along Gusau,  the state Capital on  Monday over the incessant attacks by bandits in their Communities. The armed Zamfara Youths who wre said to  have blocked  the highway  Kurya junction may have  shown their anger   by resorting to destruction of property and  Commercial vehicles along the road.  The aggrieved Zamfara Youths  who were not happy over  the unending insecurity  and attacks  which the people of the state are passing through in the hands of the bandits  have vowed to fight back since the government could no longer protect lives and properties in the state.

They noted that bandits  since 2013,   have abducted no fewer than 1,190  people from the various parts of the state  and over 100,000  other people displaced  from their homes as a result of the bandits attacks  while 14,378 Livestock  were rustled within the period.

The Value News learnt that past  and present governor of the governors of the state, had  N including students 970 million  on payment of ransom to the  bandits, turned kidnappers  to secure the release of kidnapped persons but that was  how far they could go. Much of the ransom was  said to have  been paid  to bandits  to encourage them to drop their guns by the current Bello Matawalle Administration but the situation appear to be getting worse by the day, an indigene of Rigiya Community remarked.