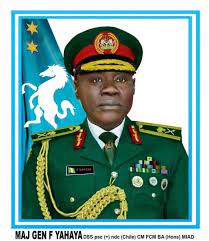 In spite of the celebrations in military circles that the surrender of Musa Adamu, popular, Mala Musa Abuja, the Chief Bomb Manufacturer of  the Islamic Fundamentalist Group, BokoHaram, and the Islamic State of West Africa, ISWAP,   and  Usman Adamu, better known as  Abu Darda, who incidentally is  the Deputy  Chef Bomb Manufacturer of the Terrorist Groups, to the Nigerian  military, the terrorist Groups are still have the experts to fill the vacuum created  by the two key Bomb experts  who had dumped terrorism activities to secure their freedom.

The initial  joy  of the  Nigerian military personnel  that the exit of the two key persons who are the Bomb Manufacturers and 335 of their  Loyalists including of the Chibok girls kidnapped in 2014, who has been radicalised and 746  other adult women and Children, would weaken the capability of the insurgent Groups  to manufacture the Bomb again appears to have been dashed .

The recent  arrest of  Yusuf  Saleh, described as one of  the  major suppliers  of Urea Fertilizer,  used in manufacturing  Improvised  Explosive Devices, IED,  by the Terrorist Groups, at Bayamari village  in Geidam  Local Government Area  of Yobe speaks volume.

The suspect  was said to have been arrested  by the Nigerian Army  troops of sector 2 of the Operation Hadin Kai . According to Onyema Nwachukwu, a Brigadier -General, and Director, of the Army Public Relations, the troops had recovered 38bags of 50Kg each of Urea Fertilizer, a major raw material used in manufacturing of IED,  by the Terrorist Groups. This is a clear indication that the exit of the two Adamus’, who are experts in manufacturing IED, have not in any way affected the  Insurgency  Groups capability to manufacture the Bombs as most of the people they had trained are still very much  on ground to do what they are used  to doing in the SAMBISA Forest, base of BokoHaram and the Lake Chad region, occupied by the ISWAP , Group.

The sector 2, of the Operation Hadin Kai,  troops,The Value News was informed, had acted on information to arrest the suspect who many believe  had been in the business of providing Logistics support to the Terrorist Groups over the years. It was not surprising why Lt. Heneral Farouk Yahaya, the Chief of Army Staff, COAS, who could not hide his feelings had urged the people ‘’to continue to avail the troops with   actionable information that will enhance the execution of the ongoing counter terrorism  and counter-insurgency war in the region’’. He had commended the troops   for ’’their vigilance and swift response in arresting  the suspect’’.

The good news is that the arrested BokoHaram, Urea Fertilizer supplier to the terrorists   in order to continue the manufacturing IED, to sustain the insurgency war in the north east has volunteered useful information which is now assisting  the investigators to help in arresting other suppliers of the Urea Fertilizer to the insurgent Groups. Brigadier General Nwachukwu, the Army spokesperson may have gladdened the heart of Nigerians when he  said  that they have  been encouraged not ‘’to allow  any form  of distraction  from the marauding terrorists’’.

Last May, the Operation Hadin Kai  troops in conjunction with the Local Vigilantes who had acted on information that  some members of the Kukareta Community  in Yobe state  are the major suppliers  of Petrol  and other  products  used in manufacturing IEDs, to the insurgents to raid it. They were said to have  combed many houses and shops in  the Community   and recovered 62 Jerry cans of Premium Motor Spirit, PMS, popular, Petrol and other items, used in the  manufacturing of IEDs. The troops were said to have also arrested some suspects, who were later handed over to the Police, for Prosecution.

Lt. General  Yahaya, who incidentally had headed the Operations Kai, prosecuting the  counter –terrorism and counter-insurgency war, before his appointment as the COAS, following the death of Ibrahim,  Attahiru, the immediate past COAS, has left no one in doubt  that he is out to  end the insurgency and all forms of militancy in the country.

Coming the heels of the of the recovery of 62 Jerry cans of PMS, in Kukareta Community in Yobe state,in May 2021,  troops of  151 Task Force Battalion, had arrested some  Logistics suppliers and informant, on their crossing point  at Banki junction –Miyanti road    at the outskirts of Aza and Bula Daloye villages  in Bama Local Government Area  of  Borno state.

Already, troops of the Operation Hadi  Kai  were said to have  intensified their intelligence gathering on  BokoHaram and ISWAP in order to block their various  sources of logistics supply ‘’to end all threats  of insecurity  in the north east and other parts of the country. The COAS, major worry is that the war  against  insurgency  in the north east states of Adamawa, Borno and Yobe,  which had cost the country billions of naira with many  lives lost  must stop’’.

While  the Nigerian Army and the Air Force  personnel are working round the clock to actually  end the over 10 year-old counter terrorism and  counter-insurgency war the insecurity situation in the north central state of Plateau  appears to have reached a worrisome stage, forcing  the Management  and Committee of deans, Directors and  Provost of the University of Jos  to close  it down to enable the students return to their  homes  or move to safer locations until normalcy is returned .

Monday Dajem, the University  Registrar, may have  hit the nail on the nail when he said that there was no  basis  of keeping the school open for normal Academic studies    with the intensified killing of Students  around the university area  shortly  after Samuel Lalong , the state governor,  relaxed  the 24-hour=curfew in the state.

The  relaxation of the 24-hour curfew imposed in three Local Government Areas of the state  by the governor may have forced  troops of Operation Safe Haven, a military Task Force set up to restore  peace  in the late Solomon home state to return to the Barracks, thus paving the way for the killer gangs to return to the streets ,’’ kill and go’’.

Note that on August 8, 2021,  some  25  travellers   in Dada-Abiyu  along  the Jos-Zaria road  in  Rukuba, Jos, the Plateau state Capital were killed  and several  houses burnt  in Zirwa, Nche-Tahu, Rikwe- Rishe A and B, Ri-Dogo, Nchu- Nzhwa, all Communities in Miango Chiefdom  in the state.

Perhaps to clip the wings of the killer gunmen in the state, Lalong the state governor had declared 24-hour curfew in the   three hotbeds  Local government  Areas of crisis: Jos North, Jos South  and Bassa, but that was how far he could go. The curfew may have forced the gunmen  who were bent on making the state to be like the north west states of Zamfara, described as home of Bandits, Kaduna and Katsina , Buhari, home state to go underground to avoid playing into the hand of the military Task Force personnel.

Many had expected Lalong, the Plateau  governor, not to be a hurry in relaxing the curfew  to avoid drawing the gunmen out to continue  their killing  in the state.  Although, he may have been encouraged to do so after briefings from the heads of the various security agencies in the state and based on his own independent reviewing of the situation to do so. This may informed that   a security Council on Wednesday, August 18, 2021, he gave a soft landing to the people   by announcing that the curfew will be observed  from 6pm  to 6am daily, beginning from Thursday, August 19, 2021.

The gunmen may have seen  the  relaxation of the 24-hour curfew  as opportunity  to resume their killings  in Jos, by targeting  the students to further  provoke the military Task Force personnel to return to the streets in the  three original Local Government Areas of the state where  the 24-hour curfew was earlier declared

In Zamfara state, where the plundering Bandits, have  made nonsense of the tight security mounted in the state have continued to  kill and abduct innocent Locals who are taken to undisclosed Locations to prepare the ground for Negotiations with the state government.  The frequent attack in the state may not be unconnected to Bello Matawalle, the state governor, believe in Negotiating with the Bandits and paying them ransom, whenever such demands are made to facilitate the release of victims.  The fallout had beenthe rise of different killer gangs involved in killing and kidnapping in the state.

Only recently, one of the notorious Bandits gang had attacked  Rini town in Bakura Local Government Area and abducted over 60 persons .  Ibrahim  Dosara, the state Commissioner for Information had said that  there are over 100 Camps  of the Bandits with over  34,000 , recruited fighters scattered all over the forest  in the state.

Given the superior firepower coming from the Nigerian troops may have forced the Bandits operating in the north west  states to split into groups to hold their ground in the Local Government Areas   under their control in any of the states   for easy Coordination of their operations.

Nasir El-Rufai, the Kaduna state governor may have called the bluff of the Bandits over Negotiation and payment of ransom to facilitate the release of abducted persons I the state that they have turned their gun on  the people to  force the governor  to reconsider his decision.

The recent clash by two rival Bandist group in Giwa Local Government Area of the state may have opened  people’s eye to know that  they have changed tactics. One of the gangs known as Gordon Mota was said to have stormed  Garke village  with members   but met another gang on ground.

An eyewitness account confirmed that it was a sad experience as the two rival gangs clashed in a show of supremacy to know who controls the Giwa Local government Area. Nine persons were said to have been killed during the fight between the two rival groups wwhich many belied centered around ‘’a disagreement over the sharing of accumulated ransoms’’.