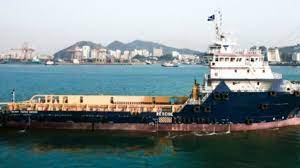 For much of  last year and now, there have been rumours making the rounds that the Nigerian Maritime Administration and Safety Agency, NIMASA,  under the close watch of Bashir Jamoh, described as one of the best Director Generals that  has ever been produced  over the last two decades may restructure the ship registration office to make it more effective.

The agency may have been encouraged to do so in order to ensure that’’ untrustworthy and sub-standard ships  would no longer be allowed to fly Nigerian flags, let alone be issued with the new Certificate of Registration to fly Nigerin, flag that could Compete  with the Liberian , Philippian , Singapore, United Kingdom,       UK, and other established maritime nations flag.

Under the International Maritime Organisation, IMO, Law, ships are required to be registered in order  to have national character to permit their movement  in territorial  or international waters. Such registration, according to maritime experts  are significant  as the registration exercise  ‘’gives protection  of the title  to the registered owner, determines the  priorities  between the persons holding  the security interest in the vessel,  and determine the jurisdiction of the vessel  for the purpose  of payment of certain levies, taxes and other liabilities to a Flag state.

The registration, according the Maritime analysts gives the ship ‘’a right to fly a country’s flag, take for instance, Nigeria, and which attributes a national character to the vessel. By flying such a country’s flag, the ship, the analyst said is tread ‘’ as the national of the flag state and accorded a diplomatic protection by the flag state’’.  This may have informed ‘’why the process of the national ownership as Registration of ships is also referred to ‘’flag state registration’’.

There is no gain saying that in restructuring the ship registration office by the Jamoh led Management of of the Maritime Regulatory agency, it is expected to demand from the ship owner such certified documents as, a letter of application for ship Registration, usually  on Company’s stationery, Copy of Certificate of incorporation with the Nigerian Corporate Affairs Commission, NCC,  CTC of Memorandum of Understanding  and Articles of Association, for proper scrutiny.

This is in addition to the submission to the agency of a Bank reference letter, Completed declaration of Ownership form with Passport Photograph attached to the ship registration form including an expired Provisional Certificate of Registration as a shipping Company registered with NIMASA and a Copy of the vessel Insurance policy.

The shipping Company that would be applying for registration of its vessel with the Federal ministry of Transportation agency is also expected to demand for such vital information as ‘’a Copy of Class Certificate,  Copy of Builders certificate, for new ships only,  Copy of deletion  of certificate for foreign flagged vessels,  certificate of Tonnage measurement  and condition of survey report among others. The agency   may have taken the decision’’ to commence the issuance the issuance of new Certificates of ship registration in the country in order to phase out the old permits’’.

An insider told The Value  News  that the decision to issue the New Ship Registration Certificates  was basically ‘’to ensure  the utilization  of secured  Statutory  Certificates and’’ prevent the entry  of untrustworthy an sub-standard  ships flying the Nigerian Flag’’.

Given an insider information why the agency had actually taken the bold initiative to restructure its Ship Registration office, Jamoh , the NIMASA, Chief Executive officer, CEO, who could not  hide his feelings disclosed that they are restructuring the office  ‘’to serve the ship owners more efficiently  and effectively in their business’’.

Going by his plan to give top priority to maritime security, maritime safety and ship development on assumption of office on March 10, 2020, following the removal of Dakuku Peterside, the former Director General, by President Muhammadu Buhari, a retired army General, Jamoh had vowed of going’’ to grow the country’s fleet and tonnage to an enviable height’’.

He had repeatedly told those that cares to listen that the agency is committed to ensuring that the country’s Ship Registration remains of international standard and one of the best in the world. It is not surprising why it has enhanced its ‘’Certificates with more security features that would stand the test of time’’.

He had said that ‘’ the all-encompassing process of issuance of the new Ship Certificate  will ensure a robust  screening  of ocean-going vessels that  would be visiting Nigerian waters after the  ongoingRegistration exercise.

Edward Osagie, an Assistant Director, in the Corporate Communications Department, had said in an official Statement that ‘’ the certificate of Cabotage ship Registry and Bareboat chartered vessels and Foreign owned vessels would be affected in the new Ship Registration exercise.

He noted that others that would be affected are the Certificate of Cabotage Ship Registry for Joint  Venture Owned vessel,  Deletion  Certificate, Bill of Sale and Transcript of Registry.  He further stated that  that the Certificate  of Mortgage  to secure current  and Certificate of freedom of encumbrance have also be changed by the agency to avoid abuse.

Note that Jamoh, the NIMASA Director General, may have gladdened the heart of the ship owners  when he volunteered information that ‘’all existing  Certificates that had been issued  by the Registrar of ships before  the implementation  of the new  regulation   in Ship Registration  would still be valid and needed to be carried  on board  vessels until  their expiration. However he said vessel owners or ship masters are free to apply for the re-issuance of their existing Certificates.

Recall that the Merchant Shipping Act of 2007, had made it mandatory for ‘’the originals of Certificates of Registration of vessels to be carried on board vessels at all time’’. It is instructive to note that the issuance   of these Ship Certificates was part of a fulfilment  of section 30 of the Merchant  Shipping Act  2007, which provides that the Registrar  of ships  shall on completion  of the Registration  of a particular ship, ‘’issue a certificate of Registration  in such term as may be approved by the agency’’.

There are indications that Jamoh, the NIMASA, boss may have sent out a signal to shipowners  to commence the issuance of the new Certificates of Ship Registration because of the Presidential approval to start the process for the disbursement of the  Cabotage vessels Finance Fund, CVFF. The CVFF, which has both a local and Foreign account denominations, according Victor Ochei, the agency Executive Director,  Maritime Law and Cabotage services,  had  as at Friday June 25, 2021,N132billion in Local currency account and $209 million in Foreign account domiciled  in Special  account in the Central  Bank of Nigeria, CBN.  The CVFF according to Ochei, who spoke at the instance of Jamoh, had continued to grow on a daily basis, as the ship Companies continue to  pay the 2% cost of transaction into the Fund.

He had said that if all the shipping Companies had been faithful in paying the 2% cost of every contract over the last 17 years, the local currency and dollar account of the CVFF, could have been more than the current amount in the Fund.  It is not surprising why the current Management of the agency had beamed its searchlight on the shipping Companies operating in the Nigerian waters to ensure that they pay the mandatory 2% cost of transaction without defaulting.