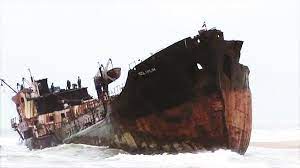 Bashir Jamoh, Director General, Nigerian Mmaritime Administration and Safety Agency, NIMASA, has given an insight why there had been too much abandoned wrecks in Nigerian waters over the years that could  have  been cleared by that the agency. Jamoh, had blamed it on the legal issues involved hat needed to be settled  between  the agency, Nigerian Ports Authority , NPA, or the Nigerian Inland Water Ways , NIWA, which are saddled with the responsibility to do so going by the enabling Act establishing them.

Note that the three agencies of the Federal ministry of Transportation, under the close watch of Rotimi Amaechi. former governor of Rivers state  had consistently claimed that it is their individual responsibility  to remove the wrecks and  derelicts  from the  Nigerian waters in order to bring relief  to  ship owners whose vessels Navigate the Nigerian water ways but that was how far they could go.

Een when the Federal Executive Council, FEC, gave a matching order last year that the  wrecks and derelicts obstructing the movement of vessels in  in the Nigerian waters should be cleared, the minister may have found it difficult to direct NIMASA, NIWA or NPA, to do so to avoid being accused of  supporting one agency or the other. This may have informed why he found it difficult to enforce the government order as the wrecks continue to increase on a daily basis.

Until his exit of Daku Peterside, as the Director General, of NIMASA, in March 10, 2020,  he had said  that there are  over 3,00  ship wrecks littering  the nation’s coastline, forcing ship industry stakeholders  to declare the country  as the world graveyard of ship wrecks and derelicts.

Many belive that if NIMASA, NIWA and NPA,, have kept their differences behind them and followed the foot step of   ECO Restoration Foundation, which single handedly removed a ship wreck causing obstruction to  ocean –going vessels at  Lekki Beach in  in Lagos, the nation’s Commercial nerve centre in 2016,  as part of its efforts to save the environment, the situation may not  have been as bad as it is today.

Jamoh, the NIMASA Director General, may have seen that the unhealthy Competition between the three agencies of the Federal ministry of Transportation over the removal of the wrecks and derelicts in the Nigerian waters was not  good enough for the image of the country that he was  said to have  initiated moves to dialogue with  Hajia Hadiza Bala Usman,  who was  until her removal from  office  last April was the Mangaing Director of NPA suspension  and George Moghalu, the Chief Executive officer, CEO, of NIWA, to resolve the legal differences out of Court over the removal of the  wrecks. He had his way.

The CEOs, of the three Maritime agencies were said to have discussed the matter extensively in their meetings which also included Hassan Bello, a former Executive Director, Nigerian Shippers Council, NSC and  the  Director Of Maritime Academy , Oron, Akwa Ibom state, south-south Ngeria.  The NIMASA, boss, may have impressed it upon  Hajia , Usman, the then Managing Director, of NPA and Moghalu, her NIWA, Counterpart, who was said to have lost out in  the All Progressive  Congress, APC, governorship primaries for the 2021, governorship election in Anambra state, south east Nigeria, that their respective agencies have business to struggle the removal of ship wrecks and derelicts in Nigerian maritime domain with  NIMASA. He was said to have urged them to have put pressure on the NPA and the NIWA, CEOs, to    agreeing ‘’to cede  their responsibilities   as regards  to the wrecks and derelicts removal to NIMASA.

An industry stakeholder who spoke to The Value News disclosed that the arrangement of the CEOs of NIWA and NPA,  to transfer  the responsibility of removing the wrecks and derelicts in Nigerian waters to NIMASA, have finally settled  the question  as to which agency in the Federal ministry of Transportation   have the authority ’’to implement  the government policy on removal of ship wrecks and derelicts in Nigerian waters. This may have strengthened the resolve of Jamoh, the NIMASA, helmsman, who, maritime analysts had described   as a bridge builder in the nation’s maritime industry to bring all the industry stakeholders, including the Nigerian Navy and the Nigerian Immigration Service,NIS, together, to work as a team to confront the Common enemy: the         Piracy in Nigerian waters.

The decision by NIWA and NPA, CEOs, to cede their respective agencies responsibility to NIMASA, to go ahead and remove the abandoned wrecks and derelicts in Nigerian waters take the may have encouraged him to take an inventory of the cost implication to the agency. Based on the number of the ship wrecks which are littered all over the Nigerian coastline may have given an insight that to go a good job, the agency would need   close to N10billion.

Indeed, he was said to have made it clear to those that cares to listen that after clearing the wrecks ad derelicts which  are  scattered all over the country’s maritime domain, ‘’anyone  found engaging  in illegal  scrapping  of vessels  or picking wrecks from the nation’s maritime domain in future would be prosecuted. Hear He had said that every dime collected as penalty from those caught in the act would be transferred into government coffers.  There are fears in both official and unofficial circles that the wrecks and derelicts which are littered all over the country’s territorial domain may take long to be removed.  An Industry operator told The Magazine that it takes a Contractor   close to six months to remove and full dismantle a ship wreck because of the difficult and dangerous situation of Nigeria’s maritime domain.  Take for instance, the removal of a barge wreck in 2011,   near Alpha Beach, which was said to have been suspended due to high tides.  The situation, aroud  the Lagos Alpha Beach, where there are so many wrecks and derelicts, may not have changed, meaning that Jamoh, and the Contractors, that would be engaged, by NIMASA, both Local and Foreign would have much job to do in clearing the wrecks in the Nigerian waters.