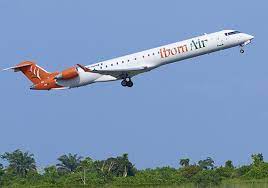 Ibom Air one of the fastest growing airlines currently in Nigeria, floated by the government of Governor Udom Emmanuel of Akwa Ibom has added two more aircraft to its fleet. The Akwa Ibom airline took delivery of the two aircraft, Airbus A220 series on Sunday June 13, 2021 at Victor Attah International Airport, Uyo, Akwa Ibom State with the state governor Udom Emmanuel on hand to receive the aircraft.

The governor while receiving the aircraft in company of the governors of Sokoto, Aminu Tambuwal, Enugu, Daves Umahi and Adamawa, Umaru Fintiri said the arrival of the two for the airline which brings to seven its total fleet in just 2 years of operation was in fulfillment of his promise and goal to make the airline one of the strongest and reputable not only in Nigeria but in Africa. He reiterated his commitment to increase the airline’s fleet to 10 before leaving office in 2023.

The airline’s Group Managing Director Captain Mfon Udom stressed the expansive goal of the airline to include expanding its operation to Accra, Ghana, Malabo in Equatorial Guinea and Yaoundé Cameroun among others.

Governor Emmanuel since the inception of the aircraft the first and the only one to be operated by a state government in Nigeria has received several encomiums for the initiative. These was re-echoed by the three governors that were among the dignitaries at the reception of the Ibom Air aircraft. They maintained that he has written his name in goal by floating a state government airline that continues to gain prominence and confidence of Nigerians in its operation.

The Value News gathered that the two Aibus A220 said to have been built two years ago are on lease from EgyptAir and they join the Nigerian airline’s five CRJ900 aircraft already in its fleet. TheyWe also gathered that the two aircraft were formerly operated by Air Sinai on the outfit’s covert Tel Aviv routes.

The choice of aircraft type by Ibom Air has received commendation by experts following its high efficiency in short and medium-haul operations. Similarly, Its high fuel efficiency and comfort are said to be two of the factors that have made reputable international airlines Delta Airlines, Air Canada, Korean Air, SWISS Air and Air Baltic to cling to the Airbus A220 type.

It could be recalled that the governor while marking his sixth year anniversary on May 29 had promised to boost the fleet of Ibom Air by two additional aircraft in no distance time. Ibom Air, which is wholly owned by the Akwa Ibom state government, commenced operations on June 7th, 2019,with a flight from Victor Attah International Airport in Uyo to Muritala Muhammed International Airport in Lagos.

Ibom Air took delivery of three CRJ900s ahead of the launch of its operation flights and they started to arrive from February 2019. Two more units of the regional jet were also delivered in 2020.

Ibom Air which is the dominant airline operating in and out of Uyo currently flies to Abuja, Calabar, Enugu, Lagos and Port Harcourt on its domestic operations. But if the promise by Governor Emmanuel and airline Managing Director Captain Udom is anything to go by, the airline will start regional routes in few months ahead with the arrival of Airbus suited for long and medium haul flights. As stated by the MD Captain Udom a renowned airline pilot who was one of the directors of the then ADC Airlines, the focus is on Ghana, Cameroun and Equatorial Guinea at first instance before further expansion to other parts of Africa and International routes.

Before the launch of Ibom Air, Aero and Dana Airline were prominent airlines servicing Uyo routes, but both airlines later suspended the routes with the commencement of Ibom Air.

However there are strong indications that Dana Air will soon return to Uyo with the recent signing of code share alliance agreement between Dana Air and Ibom Air in Uyo.

Under the partnership agreement both airlines would jointly offer flights to common destinations while also operating flight services to destinations that are not within each airline’s routes.

Ibom Air is one of the signature project that governor Emmanuel has embarked on in his six years administration which the Commissioner of Information Ini Ememobong  said has placed the state in the global aviation map being the only state to have perform such feat.

Other notable projects embarked upon by Governor Emmanuel so far includes several industries like the Syringe Industry, Coconut Refinery, Electric Metering Industry, Plywood Manufacturing Company and scores of road projects some of which were commissioned as part of his six year anniversary weeks ago.

Although critics have frowned at the governor for taking too many projects at the same time, with the prospect that most of them would not be completed in the life of his administration especially with his recent signing of new major capital intensive projects like the multi- billion Naira Akwa Ibom University Teaching Hospital. But he has assured that he is on what he tagged a ‘Completion Agenda task’. But this has not dissuaded critics for their pessimism.