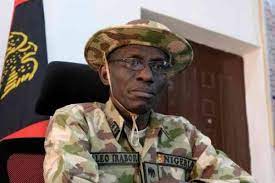 The Bandits operating in the north west states of Zamfara, Kaduna, Katsina, President Muhammadu Buhari, a etired Army General home state, appears to have bitten more than they can chew. The Bandits and the Islamist Fundamental Group, BokoHaram and the Islamic State of West African African Province, ISWAP,   may have stepped  their attack in the north west  and north east geopolitical regions respectively  when information filtered out that the Taliban who had waged a 20 year-old war to take over the North American country  of the United States, US,  backed government Afghanistan, has finally sacked President Mohammad Ashraf Ghani, has finally sacked the government On Thursday, August 19, 2021,, forcing him to flee to, Qatar, on exile.

They  may have had at the back of their mind that if the Talibans could take over the government in  the Middle East country of Afghanistan, they could do it in Nigeria. It is not surprising why the Bandits and the BokOharam and ISWAP, Nsurgents, may have buried their differences to Collaborate in their struggle to take over control of the entire north and impose Islamic Law on the region.  They may have thought that with the  Monday, August, 23, 21, attack, of the Nigerian Defence  Academy, NDA, Kaduna, would weaken the Nigerian Army fighting capability but got it wrong.

Lucky Irabour, a General and Chief Defence Staff, CDS, who had described the attack on the Permanent site of  Defence Academy,  as ‘madness’’, had said that the Criminal elements  must be stopped  as soon as possible’’. The Nigerian Army General, who oversees the Affairs of the Multinational Joint Task Force, MNJTF, Collaborating with the Nigerian Army, in prosecuting the counter-insurgency war in the north eastern part of the country  may have shown the anger in him over the Bandits attack on the military facility in Kaduna state,  when he met with  the retired military officers  in Yoloa, the Capital of Adamawa state  on Tuesday, August 24, 2021, to seek their support in the ongoing anti- insurgency war in the region which had entered it 12th year.

He had told  the retired senior military officers in  north east states of Adamawa, Borno, Yobe,  Bauchi, Gombe and Taraba , that ‘’the infiltration  of the Bandits and the Insurgents  into the country  did not come  by virtue  of  banditry action’’. Note that Taraba, is the home state of  Theophilous, Danjuma, a multi-billionaire  retired Army General, and a one –time Chief of Army Staff and former minister of Defence, during former President Olusegun Obasanjo Administration.

, He noted that ‘’any form of insecurity is a cause  of worry  for anyone, stressing that’’ the military  are determined that this  madness  must be  brought to an end speedily’’.  Note that the rampaging Bandits had killed two  officers and abducted  another senior officer when the stormed the NDA, Kaduna premises.  He may have made the retired senior military officers.

The Army Chief may have known that Nigerians are losing their patience over the high level of insecurity in the county that he had asked  the people ‘’to trust  the relevant  security agencies that have  been saddled with the responsibilities of planning  the  rehabilitation  of repentant  insurgents’’. He has assured the retired north east military officers that  there was no cause  for alarm in bringing the insurgency war to an end,  insisting that ‘’the military  will deal with the  situation  for  the good of the region  as there will be no lose ends that will give the insurgents  room again to strike in the region.

Appealing to the north east  military vetrans  to take  full advantage  of the insecurity parley in the region, in ‘’evaluating  the various military operations’’,staing that  that their patrotic and constructive  assessment  of the general insecurity situation  in the region  would add value  to the ongoing Clearance  operations,   which had forced over 2,600 Insurgents  to surrender so far, as confirmed by Babaga Zulum, a Professor and governor of Borno state, who disclosed that he has been attacked more than 50 times . This may have informed why the north east state governor has asked the Katsina state born Nigerian President  at a closed door meeting at the Presidential Villa on Tuesday, August 24, 2021, not to bow to pressure to reject the surrendered Insurgents  to avoid a return to an endless  war  in the region.

Admitted that with the over 12 years of iInsurgency in the region, over 100,000 people have been killed which had made over 50,000 other people comprising of   women as widow including Children, who are Ophans, in Borno state alone, the Borno governor would the Nigerian President to pardon the surrendered Insurgents instead of prosecuting them for their Criminal activities in the country.

Kunle Olawunmi, a retired Naval Commodore, may have shocked Nigerians including the service Chiefs when he said the government knows behind  the decade –long  BokoHaram  Insurgency in the north east. He alluded to the fact that the government said that   they had arrested 400 Bureau De Change, BDCs,  operators that are sponsoring  Boko Haram Insurgents’’ but that that was how  far they  could go. The retired senior Navaval officer noted that   months down the line, the long-awaited list of the BDCs operators sponsoring the Insurgents are yet to be made public, stressing that this is a bad advertisement for the Buhari Administration. He believes that the government has developed a cold feet in fighting   Insurgency or Banditry in the country because ‘’some of those backing Insurgents or Bandits are top government officials’’, confirming what former President Good Goodluck Jonathan had said that that there are Boko Haram members in government.

The Army would not agree. This is because intensified military attack on the terrorists Bandits appears to have become too hot in the recent time that the Criminal elements no longer have a suitable hiding place in the forest that they are gradually infiltrating the north central stat of Plateau, which had been known for violence in the early 80s.

Recall that between August 14, and now, the north central state had been in the news, both within and outside the country , over persistent attacks and killings which had encouraged members of the state security Council  comprising  of Samuel Lalong, the state governor  and the military and paramilitary security chiefs to go back to the drawing board in order  to bring the situation under control.

Notwithstanding  the efforts being made by  the security agencies personnel in the state who have the backing of the governor to deal decisively with the gunmen trying to throw the state  into crisis, nine persons were said to have been killed  at Kwoi village , in Magu Local Government Area,  when fight broke out between  of security operatives and the gunrunners in the Plateau state village. Ubah Ogaba, An Assistant Superintendent of Police, the Plateau state Police Command spokesperson   disclosed six of the hoodlums were  shot dead  while several others escaped with bullet wounds.

The Plateau state Police Command Image maker disclosed that  Ahdulrahman Isah,  An Inspector  and Commander of Usman Alkali Baba, the Inspector General of Police, IGP’S, Intelligence Response Team, IRT,  based in Magu town, and  one Hassam Mohammed , a Local Vigilante lost their life in the gun duel with the gunmen.

The Magu Community attackers may be jubilating in their hideout in the state that they succeeded in throwing  throwing the  Community into confusion but it may be short-lived.  This is because the security operatives who went after the hoodlums at the Magu village had recovered three breach numbers from the fleeing gunmenmen which will help tracing them and their sponsors in their hideout in the  state. The Telecommunications breach numbers are 868, 106076 and 123489.

The Value News learnt the members of the state Police Command, IRT, are working closely with the MTN, and other Telecommunications Companies operating in the state to unravel the owners of those breach numbers, meaning that their days are numbered.

Already, Lalong, the All Progressive Congress, APC, governor of the state, has made it  clear to those that cares to listen  that  ‘’the government   will not allow any form of Lawless  to disrupt the peace of the state’’, warning those that are   bent on fomenting  trouble  to desist from it as it will never be tolerated’’.  This may have informed why the Military Joint Task Force are combing the nooks and crannies of the flashpoint Local government Areas in the state to fish out the hoodlums.