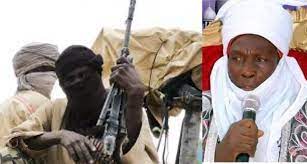 When Abubakar Saiad, a retired Brigadier General and the Sultan of Sokoto, said no person is safe in the northern part of the country because of the repeated Bandit attacks in the north western states of Zaamfara, Kaduna and the occasional attacks in Sokoto, Kebbi and the north central state of Niger, security operatives had replied him   that the region is safe to show that they are working.

The kidnap of Alhassan Adamu, the 85 year-old  Emir of Kajuru, six days after  the abduction of 121 students  of Bethel Baptist school in neighbouring Chikun  Local government to Kajuru Local government area of Kaduna state had confirmed what the Sultan of Sokoto had said, that no person is safe in the north.

The 200 member –gang of the Bandits group were said to have stormed the Emir’s Palace, without any respect for the Traditional institution, in the early hours of Sunday, July 11, 2021, shooting sporadically at the Palace force the occupants out from their hiding place into a waiting vehicle which took them to an unknown  location There  are fears that they have crossed  over to Zamfara o Katsina forests  awaiting to be taken to Niger Republic where they could stand a better chance to Negotiate with the Authorities for their release.

The Bandit gang, who had stormed the Emir’s Palace, according to Mohammed Jalige, the sspokesperson of the Kaduna state Police Command, had kidnappe three women,  two of his grand- children,  three of his aides and five others, thus bringing the number of abducted members of the family  to 10 , was ‘’a joke taken too far by the bandits’’,  declared  Ibrahim Zailani,Speaker, Kaduna state, House of Assembly.

Many fears that since the Bandit gangs, could attack Kajuru, Headquarters of Kajuru Local government, which is about 30 Km, to Kaduna, the state Capital, and kidnap the Emir and nine other members of the  his family  including attack on Chikun and other other neighbouring Local government areas to Kaduna, the state Capital, Nasir E-Rufai, a former minister of  the Fedral Capital Territory, FCT, during President Olusegun Obasanjo Presidency and governor of the north west state may have to watch it. This is because the Bandits,  who have already attacked Zaria, another major city in the state, may brave the odds to attack Kaduna, which would be a big blow to the country to prove a point that they can attack any part of the state at any time. Now the Bandits aree demanding for a N200 million ranson to facilitate the release of the Emir and his 13 family members.

Security experts would want Farouk Yahaya, a Lt. General and Chief of Army Staff, COAS, who was recently in Kaduna to visit the wounded  Operation Hadi Kai troops at the  various theatres  of operations in the north east states of Borno and and Yobe, while fighting the Islamic Fundamentalist Group , BokoHaram and Islamic State of West African Province,, ISWAP, insurgents to deploy more troops to Kaduna state, to avoid turning it to another Borno or Yobe states.

They would want Lt. Geral Yayaha, who controls the Army, and who have his ground troops scattered  in different parts of the country with a promise  ‘’to tackling  the bandits, insurgency  and other  security challenges  in the country  including the indigenous People of Biafra, IPOB, which acclaimed  leader Nnnamdi Kanu, is currently in  of State Security , DSS, custody, facing terrorism and treasonable felony and other charges in Court to keep to his words.

Although, he had assured that ‘’logistics will be provided  for the troops involved  in the different military operations across the country, they would want  to match his words with action to give Nigerians hope of restoration of normalcy in the country.

Meanwhile a combined Team comprising of the Police Mobile Force, operatives of Operation Puff Adder and the Anti-Kidnapping squad of the Kaduna state Police Command were said to have launched a manhunt  for the Kidnappers of Emir of Kajuru and 12 other members of his family kidnapped by Bandits with a view to rescuing the victims and arresting the suspected Criminals.

The Bandits who are desperate for money to sustain the tempo of their attacks were said to have channeled their energy to kidnapping students to force the governors of the affected north west states where students, particular, had been kidnapped to pay them ransom were said to have abducted Mallam Nasiru Mainara, the provost  of the College of Agriculture  and Animal Science, Bakura, in Zamfara state.

Note that  Bello Matawalle , a former People’s Democratic Party, PDP, governor of  the state, who had decamped to the ruling All Progeressive Congress, APC, at the Prompting of the Katsina state born  Nigerian President, to attract the Federal government support to deal decisively  with the Bandits may have been disappointed that nothing appears to have  changed as the Bandits are still doing what they are used to: attack on Communities and schools to kidnap innocent people for ransom.

.Recall that he had initiated an Amnesty Programme to appease the bandits to sheath their sword and stop further attack on Communities and kidnap of persons but that was how far he could go. The Zamfara state  Commissioner may have opened up why the Banditry cannot stop in the state and beyond, when he disclosed that  that there are more than 100  different Camps and over 30,000 Bandits operating  across the north west states, particular, Zamfara, Kaduna and Katsina, the Nigerian President home state.

But the retired army General, Nigerian President would not want to hear that there are too many Camps of of the Bandits in the forests in Zamfara state with over 30,000 fighters,  he would want the military to go ahead and crush the Bandits, insurgents and other criminal gangs in many of the troubled parts of the country, no matter their number.