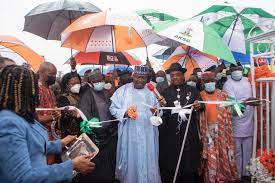 The 25 kilometre dualised Uyo- Ikot Ekpene Road has been commissioned. The commissioning of the road which is a major road linking Akwa Ibom State with other states especially Abia was done by Ahmad Lawan the Senate President, on the invitation of Emmanuel Udom, the state governor.

Speaking during the commissioning, Lawan commended Governor Udom for his development stride and for taking the bold initiative to complete the road project which was said to have been started by Godswel Akabio, his predecessor, and now minister of the Niger Delta. At present, the 25 Km, road is at 20 percent completion stage. Given the fact that it is a federal government road, the Senate President pledged ‘‘to partner the Federal Ministry of works and Housing to ensure a refund of the amount that had been spent by the state government to facilitate the early Completion of the road.

He equally commended the governor for his belief in the unity, peace, development and progress of Nigeria and his vision and approach to governance which has made him a model.

“ Governor Udom is justice, unity, peace, progress and development’’, he had said. According to him, the governor is right in all the actions he has taken when the Oyo-Ikot Epene road was left at 20 percent completion. You took it over, noting, that ‘‘it explains his love for the people of the state’’. He described Governor Udom as a ‘‘pan Nigeria, reasonable, purposeful’’, progressive and determined to contribute his quota to the development of the country”.

“Although a federal road, you decided to complete it for your people. You have demonstrated to Nigerians that the business of development must be on all tiers of government. What the federal government needs is partnership, cooperation and concerted effort in development”.

Lawan advised other governors to emulate Akwa Ibom in taking over the construction of federal roads passing through their states and seek a refund instead of waiting for the federal government. Stressing he will always advocate for a refund to such states that have rehabilitated federal roads.

He said the federal government has committed colossus sum towards infrastructural development in the country, and enjoin all the tiers of government to join hands to tackle the security changes now bedeviling the country.

In his remark at the event, Governor Emmanuel emphasized that the road was constructed with state resources that could have deployed to the development of other sectors of the state economy and appealed for a prompt refund by the federal government. The governor used the occasion to asked for the extension of the dualised road to Aba in Abia State to ease doing business for both states being the major link road from Akwa Ibom to the Eastern states.

“This road may not be economically viable if the Federal Government abandon the Calabar- Aba road that had long been awarded and left at the level of earthwork. We believe that Minister of Works would reimburse us to enable us link the entire state with these roads. He stressed that the commissioning of the road was critical to his completion agenda.

The commissioning of the road is one in the series of projects the governor has commissioned and inaugurated in the past three weeks. Prior to the 34th anniversary of the state on September 23, Governor Udom Emmanuel had commission many roads within Uyo metropolis and other local government like Obot Akara and Ibesikpo Asutan. He also commissioned the 21 storey Dakaddah Towers that is mearnt to provide a befitting office space to multinational companies operating in the state. He had also invited the Vice President Yemi Osibanjo to the state recently to lay the foundation stone for the Dakaddah luzury Housing Estate which is geared towards solving accommodation problem in the state.

Similarly, the government is constructing some industries which include, Syringe Manufacturing Company, Electricity Metering Company, Flour Mills and Coconut Refinery.