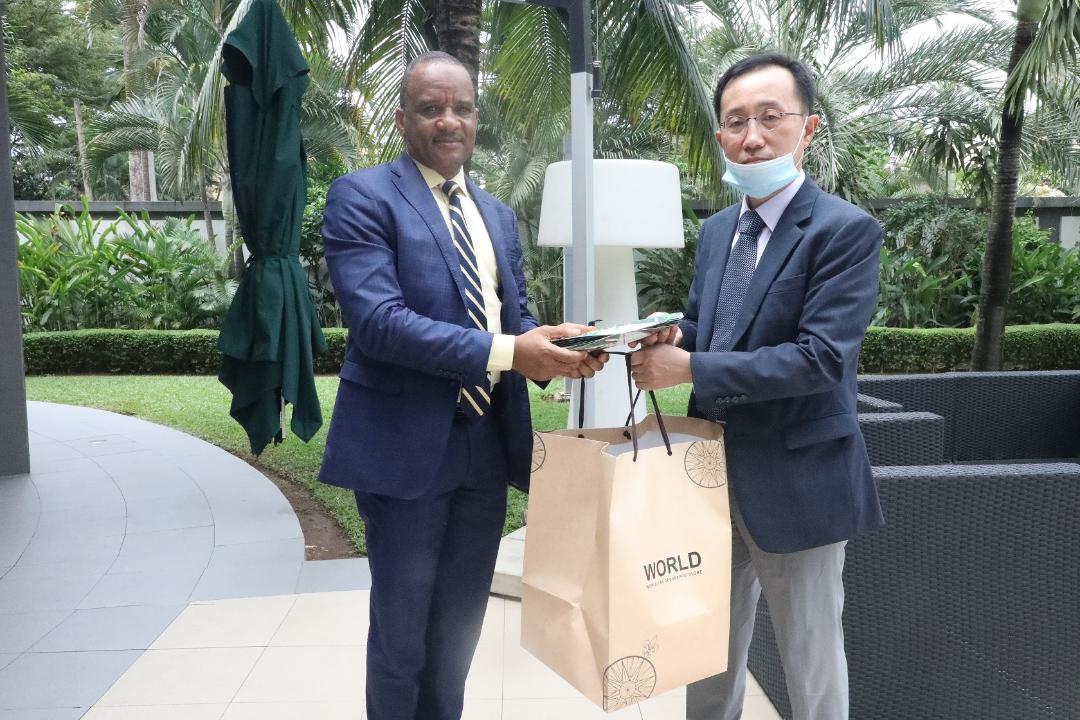 With the strengthened business relationship  between  Nigeria and the Asian country of  Republic of  South Korea in the areas ports development, power and renewable energy, gas pipeline, which  had produced positive results within the two countries, over the last couple of  years,  the Nigerian Maritime Administration and Safety Agency, NIMASA, under the close watch of Barshir Jamoh,  appears to have further extended  the business relationship between the two countries  to the areas of trade and shipping.

Kim In-Taek,  the  Consul General, Embassy  of the Republic of South Korea, who is nearing  his two-year tenure in Nigeria, may have taken advantage of the good business relationship between the two countries  to hold  a top level meeting  with  Jamoh, the Director General , NIMASA, in the agency office Complex in Lagos recently .

Note that etween March and now,  Jamoh,  who replaced Dakuku Peterside, the Rivers state politician as the Director General of the agency  following a change in the leadership of the Maritime Regulatory  Agency by President Muhammadu Buhari have been exploiting his contacts both within and outside the country  including using the  his contacts  with the friendly Consul Generals, in the Embassies in Nigeria, to  further promote  the nation’s shipping industry.

Based on his vision for the nation’s maritime  sector, the NIMASA, helmsman and In-Taek,  were said to have  agreed at their meeting  that both  countries need’’ to  intensify their  Collaboration  in the areas of trade and ship development to further cement their business relationship’’. The duo may have spoken out  their  mind at the meeting when they insist that ‘’there was  need  to  expand  the business relationship in line with global economic dynamics’’.

It is instructive to note that the development of the nation’s maritime potentials has been one of major focus of the Katsina  state born Nigerian President   economic diversification agenda over the last five years. Jamoh, many believe has cued into the policy agenda  going by his message to the Republic of South  Korea , Consul General.

He was said to have made the  Consul General understand  that  South  Korea is an  important partner  in the effort  to harness the enormous  treasures of the country’s marine environment.  That much was  confirmed by Philip Kyanet, a Deputy Director and the agency Head of Corporate Communications.

Jamoh, the NIMASA, Director General, who could not hide his feeling at the meeting was said to have repeatedly told the  Consul General, that ‘’there is a great  deal of interest   in harnessing  the nation’s rich  maritime  resources and potential  as new sources  of revenue generation  under the   government  economic diversification drive.

Kim In-Taek, the outgoing, South Korea Consul General believes that ‘’to Consolidate  on the already existing business   relationship   between the two countries  and extend it further to trade and maritime  Corporation,  particular, in the areas of ship building, ship repairs and ship recycling, ‘’there is need for the them to put in more effort in other to further improve  their existing Cordial relationship and business Corporation .

There is no gainsaying the fact  that the development of the country’s shipping industry was part of the three –point agenda of the Jamoh’s Administration in NIMASA, which also included maritime safety and  security.

The South  Korea Consul General may have gladdened the heart of the NIMASA Director General and his Management Team , when he  assured that his country  ‘’is willing  to develop  a good working relationship with the nation’s maritime sector’’, which was what the agency officials were said to be  waiting to hear from him  at  the Lagos meeting in order to follow up the agreement reached with his  successor.

Describing the agency as a very important Organisation, In-Taek   said ‘’Nigeria has the potentials  because it  is the leading nation in the West African Sub-region, not only  in the shipping sub –sector of the nation’s maritime industry  but also in other business areas of the economy.

According to him, Nigeria  has the population and the market to its  an advantage over all  other countries within the African Continent.  He noted that this  may have informed   why  the  South Koreans  can do business with Nigerians successfully. This is evident going by number of the Asian country Companies doing business in Nigeria. Take for instance, the South  Korea LG  Television and Telephone  Companies including, Samsung, a television, Computer and  Telephone manufacturing Company which product brands  are sold  all over  the country  major  markets. Some other South Korean Companies  were said to have taken advantage of the inroad created by LG and Samsung, to also push their Television, telephone  and Computer products into the Nigeria market. Some of the new Television, manufactured by the South Korean   Companies  were said to be gaining ground in the Nigerian market and are making waves.

A document obtained from the Korean Trade Investment Promotion Agency, KOTRA, in Lagos, the nation’s Commercial hub center shows that the export volume from the country  into Nigeria  increased to $540  between January and August, 2019.

But the volume of  the country’s exports into the country   in this 2020,   may have dropped  because of the Wuhan Town in Hebei province of the Asian country  of China emerged coronavirus , popular, COVID 19. The pandemic  and necessitated the lock down of the country and  the shutdown of the Nnamdi Azikiwe, and Murtala Muhammed International airports in Abuja, the Federal Capital Territory and Ikeja , Lagos, respectively, including other  International airports in the country, thus forestalling both Foreign Commercial flights and Cargo planes from flying into the country.

Recall that the Asian country  exports goods  into  the Nigerian markets  through the seaports and airports, going by the records from KOTRA, shows that it exported   $460,813 million worth of goods into the Nigeria   in 2016, $2,121,967 billion in 2017 and $917,850  million in 2018. The  Trade  statistics shows that the country  started gaining foothold on the Nigerian economy in 2016 and which it had sustained , thus competing with Chinese goods  .

KOTRA, officials  are optimistic that with the gradual relaxation of the  lockdown and the reopening of the two major International Airports in the Country, Nnamdi Azikiwe and MMIA, the volume of the south Koorea exports into the country would be on the increase again.

Appealing to Jamoh, the NIMASA ,Director General to  extend  the same level of Corporation  accorded to him in his two years stay  in Nigeria to his successor, he disclosed that it is the only way to implement the agreement that  had been reached  a their meeting without defaulting  in the area of ship building.