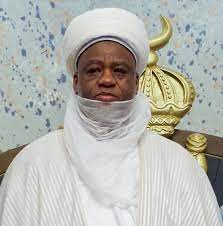 Sa’ad Abubakar, a retired Brigadier General and Sultan of Sokoto, is not a happy monarch. The Sultan’s source of unhappiness is the increasing high level of insecurity situation in the north and other parts of the country.

The recent Bandits attack of the Nigerian Defence Academy, Kaduna, north western part of Nigerian, which Okechukwu Ojukwu, Chairman, National Human Rights Commission, NHRC,m ay have convinced him that the level of ‘’insecurity in the country  had worsened’’ under the present  Leadership of President Muhammadu Buhari,  a retired Army General.

The  retired Brigadier General turned monarch who could not hide his feelings, may have taken advantage of   the 3rd  quarter, meeting of’’ the Intra- Religious Council’’ meeting  in Abuja, the Federal Capital Territory, FCT, on Thursday August 26, 2021,  to speak out.

Not that given the high level of insecurity in the north particular, where guns are freely used by the Islamic Fundamentalist Group, Boko Haram, and the Islamic State of West African Province, ISWAP, Insurgents in the north east and the Bandits in the north west states of Zamfara, described as home of the Bandits, Kaduna, Katsina, Buhari  home state including Niger, home state of Ibrahim Babangida, a retired Army General and former military President  as well as may have informed  why he  said  that the situation calls for urgent action to be taken to solve the insecurity challenges.

.The activities of the Indigenous People of Biafra, IPOB, and its militant wing, Eastern Security Network, ESN, under the close watch of Nnamdi Kanu who is currently in Department of State Security, DSS, custody,  may have encouraged  the aggrieved Sultan, who could no longer stomach  what he is seeing in the country at present  to have threatened that he will not ‘’hesitate  in ‘’spilling  the bean  about the state of the nation’’.

In an emotional outburst, at the Intra-Religious meeting in Abuja, the revered monarch in the north may have sent a message to the retired Amy General that ‘’things are not getting any better’’ in the country. He may have  hit the nail on the nail on the head when he disclosed that ‘’these days unknown gunmen raid  people’s houses and kill mercilessly kill as currently obtained in Plateau state, forcing Samuel Lalong , the state governor to have declared curfew twice in August in the four Councils in the state to stop the killing but that was how far he could go.

.  An aggrieved Sultan  had ‘’wondered how,  marauders  could remain  unknown  when the nation  has various Intelligence agencies, DSS, Defence Military Intelligence, DMI, among others.  He noted what the country needs under the  present circumstances  are’’proactive  intelligence agencies that will think ahead of anybody or criminal trying  to do anything cynical or to disrupt public peace’’.

Putting on the garb of a military officer, he opined that ‘’ proper intelligence gathering  will put the security operatives  a step ahead  of the criminal elements troubling the nation.  He averred that the insecurity situation bedeviling the country has gotten to the height where Nigerians could no longer ‘’fold their hands while unknown gunmen kill and go in different parts of the country, particular, in the north.

However, he believes that Nigeria could still attain peace through ‘’ honest dialogue’’.  He had expected the Presidency to lead the dialogue that would involve all the Leaders, elders and people of influence in their respective regions. Appealing to the retired Army General to do everything within powers to reach out to the people irrespective of political affiliation and Religion in order’’ to sit down and talk to one another’’ insisting the goodwill is still there towards one another.  He noted that ‘’what dialogue could not solve, violence cannot solve it, meaning that the insurgency, Banditry in the north and the secessionist agitations in the south cannot solve it.

The Sokoto Caliphate monarch, may have won the heart of Nigerians as a Royal father when he urged security agencies personnel ‘’to up their game’’, in order ‘’to identify those people who incite violence in the society  and  take action against them’’. He had said that no person, no matter how highly placed is above the Law. He may have alluded ‘’ to the religious leaders, ethnic leaders and traditional Rules, who take advantage of their position’’ to preach hatred   when they return to their various ‘ comfort  zones’’ .

He would want them to be’’ invited, interrogated and be made to face the full weight of the Law’’ as a deterrence to other trouble makers in the country. He had made it clear to those that cares to listen that the people who say  such nasty and bad things ‘’to further raise tensions in the society higher’’ should be put under the security watch.  He may have alluded to Matthew Kukah,a  Catholic Bishop of Sokoto Diocese who had been accused severally of making inciting  Statements capable of turning the Christians against the Muslims.

Olasupo Ayokunle, a Clergyman, a  and General Secretary of the Christian Association of Nigeria, CAN,  who was said to be at the Intra-Religious  Council meeting and he may have gotten the message right  given his promise to disseminate the agreement reached to other CAN members in order to embrace peace. Boss Mustapha, Secretary of the Federation may have been at the meeting as an observer in order to take back the message to the Authorities to work on it.

The insecurity situation  which had become so worrisome in the northern part of the country may have forced Bello Matawalle, a one-time People’s Democratic Party, PDP, governor of Zamfara state who had decamped  to the ruling All Progressive Congress, APC, to call on  the Nigerian President to declare a state of emergency on security  in the north , comprising of the north central, north east and north west geopolitical regions which have 19 states out of the 36 states of the Federation  and the FCT .

The Zamfara state governor who could not hide his feelings had said that ‘’it is the only available option for now of ending the increasing insecurity challenges  at hand in the region’’. The governor may not have been happy   over the incessant attacks on the innocent  Communities  by Bandits a in the state  and other states of the north west geo-political religion.  Filled with bitterness,  he had told Ali Janga, an Assistant Inspector General of Police, AIG,    overseeing  Zone 10, comprising of Sokoto, Kebbi,  and Zamfara, who was recently in the sate his mind

H ehas expected him to extend it to Usman Alkali Baba, the Inspector General of Police, IGP, who in turn is expected  to pass it  on the message  to the retired Army General , Commander –In-Chief , C-In-C, of the Nigerian Armed  Forces, and Chairman, National Security Council, NSC, for necessary action.

Many believe that there had been inccessant  attacks in Zamfara, Kaduna and Niger states,  in the recent time  because of the  too many Bandit Camps that are scattered in the states.  Take for instance in Zamfara state alone, Ibrahim Dorsra, the state Commissioner for Information  had said that there are 100 Camps with over 32,000 Bandits, thus making it easy  for them to Launch attack on any Community  at the slightest excuse.

Recall that last April, the Opposition PDP, had called on Buhari to declare a state of emergency on security ‘’over  the growing spate of attacks and kidnappings across the country’’ but it was given political interpretation by the ruling APC. Matawalle, the Zamfara state governor who was then  a card carrying member of the Party  when the decision was taken may have seen it as the best option  for to end the insecurity in the north west by re-echoing it.

Abubakar Bello, the Niger state governor, may not have aligned himself with Matawalle, his Counterpart in Zamfara state views  for the declaration of a state of emergency in the north which will force him to lose his exalted  office, by Executive fiat, but had called for a joint efforts of the  northern states to bring an end to banditry in the region.

He is aggrieved Bello, had said  that the Bandits operating in the state had come from neighbouring states, particular, Zamfara, to Launch their attacks, kill and go. At Mariga Local Government Area  which was said to have been deserted by residents because of the activities of the Bandits of the state. The Value News was informed that there are over 300 security agencies personnel stationed in the Community to assess  the extent damage.

Last Thursday, unknown gunmen which the Sultan had talked about at the Intra-Religious Summit in Abuja, were said to have freed 100 pupils kidnapped from an Islamic  Seminary in Niger, General Ibrahim Babangida, retired and a former military President home state after three months in  their custody.  The 100 pupils were said to have been kidnapped in Tegina Community in May 30, 2021 but Six were confirmed dead in the unknown gunmen custody while 15, had escape in June , 2021.