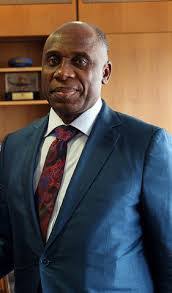 Barely five months in office as the Director General of the Nigerian Maritime Administration and Safety Agency, NIMASA. Bashir Jamoh, was said to have successfully engaged the support of Rotimi Amaechi, the minister of Transportation in order to ease the suffering of Operators of the nation’s maritime sector, particular, the indigenous ship owners.

As a prelude to easing the suffering of the indigenous ship and other maritime investors, Amechi, at the instance of Jamoh, the NIMASA Director General had proposed a tax holiday for Operators of the nation’s maritime Industry to Hajia Zainab Ahmed, minister of Finance, Budget and National Planning.

After thorough analysis of the minister of Transport proposed tax incentive request for the maritime operators, Hajia Ahmed, described as one of the most powerful ministers in the President Muhammadu Buhari, a  retired Army General’s Administration  may have  sought the approval of the Katsina state born Nigerian President  to grant tax holiday to the nation’s maritime Operators.

The minister may have seen the proposed tax incentive request from Amaechi, his  Counter-part in the ministry of Transport as part of  efforts  to stimulate investment and boost activities in the nation’s maritime industry. She got it. This is because of the adverse effect of the Wuhan Town in the Hebei province of the Asian country of China emerged coronavirus, popular, COVID 19  on the economy, particular, the maritime sector. The adverse effect of the pandemic on the sector is evident going  by the low  volume of cargo traffic at the country ‘s seaports.

From the Lagos ports of Apapa, Tin Can island, Port Multi-services Terminal Limited, PTML, PortHarcourt Area 1, Port, Onne, Rivers Port, and Delta port, Warri, and the port of Calabar in Cross river state, the story is the same:cargo traffic at the port.

The NIMASA, Director-General, Jamoh, who was said to  have  broken the cheery news recently of the ministerial approval  in Abuja, had reiterated the commitment of Amaechi, the minister of Transportation, ‘’towards ensuring the growth of the nation’s maritime sector’’. The NIMASA boss , who could not hide his feelings disclosed that many governments around the world had introduced massive tax reduction or elimination to spur activities in key sectors and rev up their economies, particular, the maritime sectors, at this trying times.

He noted that given the importance of the maritime sector to the growth and development of transportation and, by extension, the international trade , the  Katsina  state born Nigerian President  had no option by but to introduce massive tax reduction for operators in the nation’s maritime sector.

He explained that the government –oriented tax reduction incentive and other stimulus packages would give   a response that would go a long way to serve as a catalyst to a sustainable economic development in the country.

The Value News learnt that there was also a ministerial proposal for zero import duty for spareparts or components imported by Nigerian shipyards for local ship building, which will be for an initial period of four years after which it can be reviewed by the government at the prompting of the ministries of transportation and Finance, Budget and National Planning. ‘’All these are expected to give the maritime sector the vibrancy it needs for growth’’, a  maritime  expert remarked.

Given an insider information, the NIMASA helmsman disclosed that the incentives were proposed because of the importance of the nation’s maritime sector to the entire sub-Saharan African Sub-region.

He emphasised that Nigeria, alone accounts for about 65 per cent of the entire shipping trade of the sub-Saharan -African continent. The NIMASA, play make also noted that the country is the largest producer and exporter of oil and gas and largest economy, in the African Continent.

‘’It is worthy of note that the maritime sector is a crucial energizer of economic growth and development, as it facilitates the trade between countries’’, he had said.

An elated Jamoh, stressed that the country’s economy has witnessed substantial growth in the last two decades owing to reforms that  had been initiated by the Administration of President  Buhari of the ruling All Progressive Congress, APC to boost private investment in the nation’s maritime sector’’