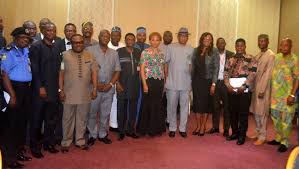 Worried by the persistent gridlock along the Oshodi-Apapa Expressway, the Nigerian Ports Authority, NPA, have acquired two.  multi-million naira trailer parks  One of the trailer parks located at Tin can Island port second gate was wholly constructed by the Authority for the purpose a couple of years ago but put under The second park located at was an underutilised Bonded terminal which had been converted for the purpose.

As  a prelude to the opening of the parks for the purpose  to which it was established  and to  ensure proper use of the  facility by truckers   taking Containerised cargoes for exports and empty Containers into  the port to the terminals  for shipment to the Shipping lines operational base in Europe, North America and Asia , without causing much  problem to other port  users, Hajia. Hadiza Bala Usman, the Authority  Managing Director, was said to have informed the plans to put it use soon.

This is bad news for truckers who may have had at the back of their mind that they their trucks at the park as long as they they are able to the neccesary   put it back on the road.

Maritime watchers  describe it as a good control measure by NPA,  to forestall abuse. It could not  be ascertained whether the  facility would be Concessioned to private  operators  to force the truck owners to pay for use  of the facility or under the control of the Authority, as it is still a closely guided  secret by NPA, management.

Recall that Sokonte Davies, the Authority’s Executive  Director, Marine and Operations, who broke the cheery  news about the planned opening of the two truck parks  at a recent  parley between  the Management and the maritime  Stakeholders  in Lagos as part of plans   to  enhance  effective port operations  and improved service delivery across the board  said the” Organisation could no longer fold its arms  and allow a complete breakdown of the system  that is giving the government  billions of naira annually from   imports and exports of non oil cargoes.

Sokonte , who was said to have represented , Hajia Usman at the stakeholders  meeting, may have put smiles on the face of the participants who were waiting to hear from him,the Authority’s next line of action in solving the Oshodi- Apapa -gridlock when hen he declared that the government Agency have taken  the bull by the horn  to proffer  a ”permanent  solution  to the menace in view of the role the sector plays  in the” sustenance of the nation’s economy”.

Many believe that the   Authority  may have been forced to go back to the drawing board to find a lasting solution  to the Apapa gridlock  with the recent  official visit of President Muhammadu Buhari to Lagos state to Commission some projects  executed by  the out-going  Akinwumi  Ambode  Administration. The President was may  have given a matching order to  Raji Babatunde Fashola, the minister of Works, Power  and Housing , and  incidentally , a former governor of the state, who has a graphic display of the grid lock in his mindset  and the NPA boss,   to quickly put on their thinking cap  to find a permanent solution to the problem without further delay.

Fashola and  Hajia Usman, may have known that the  intervention of the President was an indication  that the era of lies of works being done on the road is over. This is because the President  has a way of getting reports  on the level of work done on the projects being executed by  his Administration.  Presidency sources told The Value News that  the Katsina state born Nigeria President  has secret  informants unknown   to the ministers and Heads of Parastatals who  give him   reports on the state of projects being undertaken by the Administration or any  of the government agencies. it is not surprising why the President has at his finger tips what is happening  at the ministries and Agencies .

this may have informed  why  the minister and the NPA  helmsman,took the  Presidential directive, serious to  Fix the road which  had remained an embarrassment  to the government because of the ease at which  truck laden Containers fall  daily, thus aggravating the traffic situation on the busy  Oshodi-Apapa Express Way.When The Value News  visited the  area  on Tuesday, April 30, 2019, there were  heap of sand on the road, an indication that the Contractor was ready to  commence work.

Perhaps, to ensure that the lawless truck drivers  did not scatter  the tipped sands on the road  for the construction work, that part of the road was said to have been closed for traffic  and could only be opened, according to  an NPA , source,  after the Completion  of project .  Agents, who spoke to the Magazine  disclosed  that  truckers would have no reason  to park on the bridge  with the opening of the truck parks for use and the rehabilitation of Oshodi-Apapa Express  Way  ,to  facilitate free flow of vehicular movement to the seaports.

there are indications that the  government  agency has set up  Task Force  to ensure that  ”trucks are allowed  to park on the bridges  any longer. but  the Maritime Stakeholders would  want to be  part of the Task Force. According to Adams Jato, General Manager, Corporate and Strategic Communications, the Task Force, has  a mandate to remove  any truck laden Container or broken down truck found on the bride or or seen to be causing obstruction on the road.  This is bad news for truckers who prefer to park on the bridge  until when  they are ready they enter into the port with their Containerised cargo for export or empty Container for shipment to the Shipping line operational base   in Europe, North America or Asia, particular China and India.

Jato, the Authority  Spokes Person  maintained  that  it would be an offence for any trucker to park on the bridge  as t as  the security agencies   have been given the go-ahead  to” remove  any unwanted  trucks milling around  the port environment , found  to be  causing obstructions to vehicular movements a. The NPA  Management was said to have enjoined  the  Lagos state Traffic  officials  and the police   to ensure that  that the ”Tincan Island  -Mile 2 corridor axis is open  for optimal  traffic” and port management , to reduce to cureent traffic situation  on  the busy Oshodi-Apapa road. The Lagos Traffic officials and the Police , may have kept to the instructions but the traffic situation  had  not shown any sign of reducing for now.

Given an insider information, the NPA Spokes Person, said  they have   also directed the terminal operators and the shipping lines  to ”synergise their operations   to ensure   a success of the call up system ”. The terminal operators and the Shipping lines , were said to have given their words to  support the Authority’s efforts to  solve the gridlock problem along the Oshodi- Apapa  Express Way. Insiders told The Value News that the operators have statrted holding Consultations on areas of cooperation  in their operations to  forestall the return of the gridlock on the busy road with the measures put  in place.

Appreciative of the efforts put in place by Hajia Usman, the NPA ,  Chief Executive Officer,  Dakuku Peterside, Director General, Nigerian Maritime Administration and Safety Agency, NIMASA,  who was said to to have been represented at the Stakeholders forum by   Mrs. Anna James Akpan,  believes that ”if the call up system could be  effectively implemented, it would go a long way to facilitate the  free flow of traffic at the port  and increase the Authority revenue generation  as more ships would would the seaports with cargos to discharge and load for export as well carry their empty Containers and go back without much ados.  Peterside, his NPA Counterpart for the provision and maintenance of the facilities at the facilitate turnaround time of vessels, thus turning Nigeria into a hub in the West African sub-region, for maritime business.