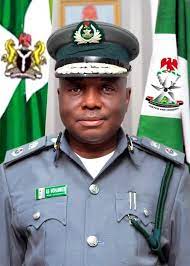 Between September 2020 and now, the unusual importers with their Clearing agents at the Onne port, Rivers state, have been much concerned about the increasing Customs monthly revenue generation which had revealed the high level of smuggling Container loads of cargoes out of the port and evasion of duties. The fraudulent activities of the importers with their agents at the port had resulted in the loss of billions of naira revenue over the years by the government as the parties smile to bank.

Comptroller Auwal Mohammed, who was said to have known much about the activities at the Onne port over the years and who was deployed to the the PrtHarcourt Area II, Command, as the Area Controller last September, was said to have mobilised his officers and men at the terminals and the exit gate to enhance the monthly revenue generation of the Command.

He was said to have put in place robust security and policy mechanisms put in place which Mahmood Ibrahim, a Deputy Comptroller and Head of the Onne port exit gate, described in Customs circles as ‘’Mr. Compliant’’, and his  Committed and diligent officers and men had cashed on it to  meticulously  scrutinize all  documents of the mporters’ trucks laden Containers at the exit the gate to ensure that the right  thingwas done.

The Asian country of China emerged coronavirus, popular COVID 19, may have forced Comptroller Mohammed, and Deputy Comptroller Ibrahim, overseeing the Onne port exit gate to go back to the drawing board to come up with new layers of checks that would further curb areas of revenue leakages at the port.

This appears to have paid off, going by the  increasing monthly revenue generation of the Command over  the last  six months which has  said to have won the heart of Hammed Ali, a retired  army Colonel  and Comptroller General of the Nigerian Customs, NCS,  led his Management Team, that  Deputy Comptroller Ibrahim, the Officer  overseeing  the Onne port exit gate was said  to have been recommended for elevation to the next rank of Comptroller in appreciation of his outstanding  contribution to the increased revenue generation of the PortHarcourt Area II, Command, which have never happened in the history of the Command over the last 37 years.

Although , the Command had generated N13.11 billion, in September, 2020, being Comptroller Mohammed  first month in office, which was said to have sent a signal to the importers with their agents that the  era of  Collaborating with officers and other security agencies personnel at the port  to smuggle Containers load of prohibited  cargoes  and evade  payment of duties was over.

A Statement by  Mrs. Ijeoma Onuigbo Ojukwu, the PortHarcourt Area, II, Command, spokesperson  shows that in the month of June alon alone, the Command had generated N14.55 billion, which had surpassed the September 2020 figure of N13.11, described as the highest revenue to  have ever been collected by the Command since it was established.

Given an insider information of the activities of the Command between January and June, 2021, an elated Comptroller Mohammed had said that the Command generated the sum of N78.17 billion, which he said  was  a 67.52% increase  compared to  the N46.66 billion collected for the government within the period last year.

The Onne Customs boss, who could not hide his feelings had said that  ‘’the feat was achieved   through the usual strict  enforcement  of  governmnt Fiscal policies, uncompromising  implementation of government directives and diligent  trade Facilitation  measures and other strategies among others that had been put place by the new Management over the last nine months.

Indeed, many see the month of June , for the Onne port based importers and agents as a very trying period for those who had contravened the government fiscal policy through wrong Classification of their goods, false declaration, Concealment and underpayment had found their  Containers  turned back at the exit gate  and taken to the Enforcement  Unit, where the Head of the Unit, in turn had taken it  to the Government Warehouse for detention or outright seizure.

Informed sources told The Magazine that some of the agents once they take delivery of their  clients’ Containers load of cargoes at the West African Container Terminal, WCT, their heart start beating once they approach  the exit gate for fear that Deputy Comptroller Ibrahim and his boys might  find fault  with their document and detain it until the unpaid duties including penalties are paid.

The meticulous check of cargoes at the exit gate in Collaboration with the officers at the Command Enforcement unit, was said to have resulted in the seizures of 18 Containers loaded with different goods ranging from  the Asian countries of India and China manufacture Tramadol drugs  and Foreign tiles  which were said to have been loaded into hundreds of cartons. The 1,387 cartons of the seized tramadol, alone was said to be worth N3.7 billion was said to have been Concealed in 1,000 cartons of Foreign tiles in a Container intercepted at the exit gate in the month of May, 2021 which was a big boost to Deputy Comptroller Ibrahim records at the Onne port exit gate as a diligent and committed officer.

The Command was said to have also  seized  two units of fairly used  Mitsubishi buses,210 bales  of second hand clothing, 4,029 used tyres, 16 units of used engine  gear box and auto spare parts including   310 pallets of laser ketup,124 cartons of tapendol, 956 Jerry cans  of Foreign processed Vegetable Oil of  25 litres each, 750 cartons of super gold candle, , 2,970 cartons of Foreign soap, 39 cartons of wine and 89 bales  of fabrics. Also seized by the Command during the period under review were 500 cartons of Medicaments.

Inspite of the fact that the Command may not have shared any border with any neigbouring West African country like Republic of Benin by sea or Niger by Land, except the Central African countries of Cameroon and Democratic Republic of Congo, by sea, the Command had seized 2,721 bags of Foreign par boiled rice  of 50Kg each. The seizure of the Foreign par boiled bags of rice have fueled the speculations making the rounds that the transit foreign rice importers  the Autonomous port of Benin and Bollore port in Benin Republic  as well as the Duoala port of Cameroon, now smuggle foreign  par boiled rice into the country  in Containers  from the neighbouring Benin and Cameroon as the Interventionist units  Comprising of the Federal Operations Units, FOU, Border Drills and the Comptroller General of Customs , CGC, Strike Force , have  become  too hard for them on Land to carry out their nefarious trade.

The good news was that five suspects were arrested by the Command in connection with the seized items, and are at  various states of investigations and prosecution in Courts.  Appealing to the importers with their agent  ‘’to imbibe the culture of  true and proper declaration, Comptroller Mohammed , opined that it  is the only to avoid  facing any harassment or losing their cargoes to government as his men at the exit gate and the anti-smuggling officers are equal to the task .

There is no gain saying the fact that the Command had recovered about N8.3 billion, lost revenue which could have entered into private account through the eagle eyes of Deputy Comptroller Ibrahim, who is in-charge of the Onne port exit gate and his officers and men during the six months under review of its operations.

In a related development, the following Agricultural  export cargoes  such as  sesame seeds, ginger, cocoa beans, hibiscus, fluorite ore, lead ore, palm kernel shell, cotton, aluminum, ingot , among other items, worth NESS, value of about  N260.15 million , as the total tonnage   of the said  export was said to have stood  at 331,356.39 tonnes with a Free On Board, FOB, of about $14million.

The export figure through the Onne port, according to informed sources could have been much more than  the  331,356.39 tonnes and what was recorded at the Onne port  and the Lagos ports of Apapa and Tin can Island, during the first half of the year  but for the rejection of the Nigerian exports by other countries, particular, in Europe and Asia.

Geofrey Onyeama, minister of Foreign Affairs was said to have opened up on the problem being faced by the Nigerian exporters  at a recent  meeting in Abuja, the Federal Capital Territory, FCT,  with Olusegun Awolowo, ground Child of late Chief Obafemi Awolowo and Executive Director of the Nigerian Export Prmotion Council, NEPC.

The minister, who could not hide his feelings had said that ‘’the quality of products,especially  Agricultural products, do not meet  the export standards of many countries’’, urging the NEPC boss, to do something about it. He had said that Nigeria has a Comparative and unique advantage   against other African countries that its Agricultural products for export ought to be physically present   in over 100 countries in the world’’.

He noted that ‘’ there are  a number of countries around  the world that are not as blessed  with  the natural resources that the country  have  but yet , through trade, have transformed  their societies and hav become  major economic powers’’.  This may have informed why he had said that  ‘’the government  will focus on strengthening  economic diplomacy  in ensuring  Nigeria benefits from countries it has  formal relationships with’’.

It is not surprising why  Awolowo,  NEPC, helmsman,  had expressed his optimism  that with the renewed government’s efforts to support the Nigerian exporters,’’ the agency’s hope  of realizing  the sum of $30billion  from non-oil eports in 2025, would be achieved’’.