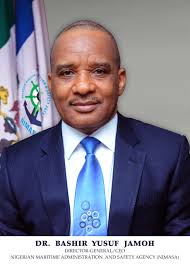 The Nigerian Seafarers joined other Maritime nations on Friday, June 25, 2021, to celebrate the Day of the Seafarer, with the theme, “Fair Future for the Seafarers’’.

The event was said to have provided opportunity for both the seafarers and the ship owners to speak out their mind. The seafarers had accused the accused the indigenous shipping Companies  of  treating them unfairly in  their job, stating that they are working  under’’ poor conditions of service’’, compared to their Counterparts in  other neighbouring West African countries of  Republic of Benin, Togo and Ghana.

Bob Yousou, an Engineer and President   of the Nigeria Merchant  Navy Officers and Water Transport  Senior Staff Association, MNOWTSSA, was the first to raise the alarm about the poor treatment  being meted  to seafarers  when he accused  the indigenous ship owners of ‘’discriminatory  conditions of service against local  seafarers’’.

He had had urged the ship owners  to review their conditions of service  for the Nigerian seafarers in order to encourage them  in the future to take up Careers in the nation’s maritime sector, instead of seeking greener pastures outside.

Aminu Umar, Managing Director, Sea Transport, and President, Nigerian Ship Owners Association,  may have spoken the mind of other indigenous ship owners when he said that it would be waste of resources to pay Nigerian seafarers  and their  foreign counterparts the salary package.

He had justified why the Foreign seafarers are better paid, to the fact that they have the skills and have something to put on the table for the benefit of the Company. He may have said that to justify the $,5000 monthly salary package for the Foreign seafarers, to the $2,000 or  even less paid to the Local seafarers.

It is on record that in Philippines alone, there are over 40000 seafarers as the country rakes in over $6 billion annually from the export of the services of the seafarers to other maritime nations to work in their Merchant vessels. This is evident with the number of Philippines seafarers, engaged by the Nigerian ship owners in their Cabotage and International ocean- going vessels to lift  dry and wet cargoes.

The United Nations Conference on Trade and Development, UNCTAD, had reported that there are  1.5 million seafarers around the world who were engaged in  lifting  10.3  billion tons of cargoes in 2017, alone. This gives an insight to the fact that there was no discrimination between the Foreign or Nigerian seafarers participating in the lifting of such cargoes.

It is not surprising why the aggrieved Nigerian seafarers may have taken advantage of Bashir Jamoh, the Director General, Nigerian Maritime Administartion and Safety Agency, NIMASA, and other top officials of the agency  including Victor Ochei, Executive Director , Maritime Labour and Cabotage Services and a Representative of Rotimi Amaechi, minister of Transportation and a one –time governor of Rivers state to cry out. ‘’We are suffering in the hands of the indigenous ship owners who had engaged our services in their ships’’.

Recall that ever since Jamoh, the NIMASA , Chief Executive Officer, CEO, assumed office in March 10, 2020, he  has continued ‘’to implement the government policies towards improving  the welfare  and working conditions  of the local seafarers in line with the International  standard  and statutory Conventions’’.

Amaechi, the minister of Transportation may have gladdened the heart of the seafarers when he urged the ship owners at the last seafarers’ day, on the need for Collaboration by all the parties ‘’to further identify and proffer workable solutions to the issues that will still be relevant to the seafarers after the 2020 pandemic, such as fair treatment, living and good working conditions of service ”. He had highlighted the harrowing experiences of the seafarers, across the world which they had endured in the course of their job, especially at the peak of the COVID-19 pandemic.

There is no gain saying the fact that Nigeria as a member state of the, International Maritime Organisation, IMO, was one of the first Maritime nations ‘’to declare seafarers as essential workers in order ‘’to ease their sufferings,”.

. He is optimistic that all the shipping Companies would cue to it as the agency continue to discuss with them. There are fears in maritime circles that the NIMASA, Director General, may not be able to get all the shipping Companies to improve their welfare package for the Local seafarers at the same time because of the number of vessels both wholly owned or Chartered used in their operations to carry both dry and wet cargoes.

Some of the indigenous shipping Companies, according to informed sources  in NIMASA, have below five ship ships that  are registered with the agency while some others have more than  tenMerchant vessels, meaning more money coming into their Company purse because of the frequency of engagement of its vessels in lifting cargoes.

For now, only the Nigerian Liquefied Natural Gas Company, NLNG ,and Shell Petroleum Development Company, SPDC, and the other Multi-national Petroleum Companies operating  in the country which have vessels to lift their wet cargoes  are said to have good  working  conditions of service for their seafarers, both local and Foreign. The NLG,  was said to gone a step further to approve a mouth watery severance package for the seafarers.

The highlight of the Seafers Day in Nigeria as reported by Philip Kaynet, a Deputy Director and Head of Corporate Communications was ‘’the presentation of Certificates of Competency,COC’’, to cadets of the Nigerian Seafarers Development Programme ,NSDP, who recently graduated from the Arab Academy for Science, Technology and Maritime Transport, Alexandra, Egypt.