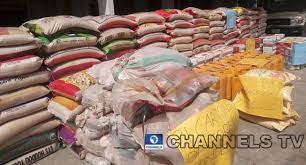 Foreign rice  and other  Contraband smugglers operating between the neighbouring  West African country of Niger Republic and Nigeria, and who had expected Cheldi Wada a Deputy Comptroller, overseeing  Katsina Command, and his anti-smuggling officers, scattered all over the Land border routes in the north west state,  to soft pedal in their operations may have to do a rethink.

Many believe that Hameed Ali, a retired Army Colonel, and Comptroller General, Nigerian Customs Service, NCS, knew why he deployed the Customs Deputy Comptroller, who had served as a one-time acting Comptroller of Seme Command, described as the busiest Land border in the African Continent, where he was said to have given the smugglers operating between Benin Republic and Nigeria, a run for their money.

This because for the one year  he was said to have  acted in that position , the Government Warehouse at the Land border Community was always filled with seized parboiled bags  of rice smuggled from the neighbouring West Africa country into the country through the bush or the 15 Creeks  around the Seme Jurisdiction.

Indeed, the experience he was said to have acquired  at  the Seme Command  under Mohammed Ubah Garba, a former Comptroller of the Command and now, an Acting Assistant Comptroller General of  Customs, Enorcement, Inspection & Investigation,  E.I&I,  in dealing with the skilful smugglers in the  area, may have emboldened him to deal decisively with the Katsina state  smugglers who were said to have cried out. The Katsina smugglers who may have taken advantage of the Banditry in the state to step up their smuggling operations got it wrong.

Unknown to them, they have a tough and experienced Customs Comptroller who could not be Compromised to penetrate easily. Informed sources told The Value News that given the lack of functional Industries in the predominantly Civil Service state, the people appear to have seeing smuggling as tan alternative source of income.

Even  President Muhammadu Buhari, a retired Army General, knew that there is high level of smuggling in the state and the  north west geopolitical region in general, that he had said that only’’ the Almighty God would be able to effectively police the vast and porous borders between Nigerian and Niger Republic’’.

The Ktastina state born Nigerian President had said that the country share more than  1,400 Kilometres of border with Niger, but much of the borders are said to be in Katsina state.  It is not surprising why Wada and his officers had to go back to the drawing to restrategise to be able to deal with the smugglers in the state who have hundreds of illegal routes to carry out their illegitimate trade.

Note that in the last three months have not been an easy one for some of  the  big time smugglers who , many believe  are well connected in Customs Circles , both at the Customs Command and the Headquarters level  but the eagle eyes of the Wada’s anti-smuggling officers on the road who have  refused to be Compromised to avoid playing into the acting Comptroller’s hands were said to have frustrated all  their efforts.

Informed sources told The Magazine, that once in a while , the Katsina Command , acting Comptroller had , disguised  himself to visit some of the identified notorious land borders in the state,  unannounced to see things himself.  This may have  forced the Patrol Team Leaders and Officers  overseeing the approved checkpoints in the state to sit up  as the acting Comptroller  had told them that all  he wants is the report of evidence  of their weekly seizures.

It is not surprising why the  Command officers and the  Patrol Team Leaders Compete among themselves  to make Contraband seizures in order to win the heart of the Customs Acting Comptroller. Between May 4, 2021 and Thursday, June 3, 2021,  the Command , was said to have  intercepted  Contraband with an estimated Duty  Paid Value , DPV, of  about N101. O3 million in different illegal smuggler routes in the state.

Many of these intercepted goods  were said to be on  transit  from the Autonomous port of Benin, Cotonou and Bollere port, also in Benin Republic, but which developed wings between Benin and Niger and entered  Nigeria  boder  to fall into the waiting hands of Wada’s men on the road and in the bush.

Giving a breakdown of the Contraband seizures, an  elated Wada,  disclosed that  the Command anti-smuggling drive facilitated the interception of 31 cartons of Condensed Milk , 8,775 litres  or 351 Jerri cans  of Petrol, 33 bags of 50Kg of Animal feeds,  40 bags of tiger nuts, seven cartons  of foreign couscous,  and 122 cartons  of foreign Spaghetti.  This is in addition, to 25 cartons  of foreign tomato paste, , 48 Jerri cans of vegetable oil of 25 litres each, six bags,  25 Kg each and  226 bags of 50 Kg each of foreign rice.

Perhaps , to completely cut the wings of the smugglers operating in the two neighbouring West African countries,  the Katsina Command, Comptroller had sought the  support  of the people  to avail them with information  on  how to track the  smugglers, as the big-time operators  were said to have gone underground. Wada would want the  Katsina trading public ‘’ to understand   the enormous responsibilities of the Customs personne who are out l to protect the  Local industries and the country’s rice farmers, from being thrown out of the market by their foreign Competitors.

Taking his sensitization  Campaign against smuggling of Contraband  to the people ,the Customs Acting Comptroller  was said to have urged them   to take advantage  of the numerous opportunities in the country of doing genuine business and go into full sale importation through the Lagos  ports of Apapa, Tincan Land or  Port Multi-services Terminal Limited, PMTL, in order  to take delivery of their goods without Customs harassment on the road as they have all the relevant import documents to show that  it was imported through the Nigerian ports instead of  engaging in smuggling activities that may land them into trouble.

Aware of the people’s lack of awareness on the dangers of smuggling to the nation’s economy in the Buhari home state, the Katsina Command,  Acting Comptroller was said to have taken up the bold initiative to start the sensitization against smuggling  in the state  in order to create awareness to the people.  He was said to have taken the sensitization Campaign to Kongolam , Mai Adu’a, Zanjo and  Birnin Kuka border axis of the state.

A senior Customs officer,  who spoke to the Magazine on condition of anonymity, dislosed that since the Katsina Acting Comptroller flagged off the sensitization Campaign  against smuggling in the state, ‘’it has brought down the tension in the state between the people and Customs personnel, as they no longer see Customs personnel as their enemies who must be harmed while carrying out their Legitimate duties  but as  friends who must be assisted to do their job.

It is instructive to note that while on the sensitization Campaign of the border Communities that were said to have been  visited, Wada, was said to have assured the people  of the Command determination  to assist the people  ‘’to become  Licensed Customs Agents in order to clear and take delivery of their imported goods in any Customs Formation anywhere in the country. He was said to have repeatedly told the people,’’ Our aim  is  to help  your business grow’’.