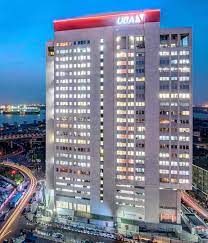 In spite of the devastating effect of the  Asian country of China, emerged Coronavirus, popular, COVID 19, over the of Nigeria, and the global economy in general, the United Bank For Africa, UBA plc, popular, pan- African Bank, have continued to soar higher and higher,  in its  profit generation  to the envy of its competitors.

This is evident going by the 2021, half year report of the Bank under the close watch of Kennedy Uzoka, tha was said to have been announced by the Bank recently. It was so impressive that other Banks are beginning to under study the pan African Bank mode of operations and even poach on the staff in order benefit from their skill.

A Statement made available to The Value News shows that  the Bank  between January and June 30, 2021, transactions, made a profit of N76.2 billion, which according to informed sources was 33.4%  higher than the N57.1 billion that was  realized by the Money Deposit Bank, MDB, within the same period last year.  This translates to an anualised Return  on Average Equity, RoAE, of 17.5% as against 14.4%  netted in the previous year.

Informed sources told The Magazine that the impressive 2021, half year, financial Report, of the pan- African  Bank had already been submitted to the Nigerian  Exchange Limited, which after a thorough assessment showed that the Bank made a Profit After Tax, PAT,  of N60.6 billion, when other Banks , are still struggling to breakeven, let alone make profit.  It is not surprising why the Bank’s shareholders are in a celebration mood that the Board of Directors, would declare good dividend for them.

The shareholders hope of getting good dividends from the Bank may have been brightened with the improved Bank  Gross earnings, which was aid to have grown from N300 billion, in June 30, 2021, to N316.6 billion in June 30, 2021, showing a phenomenal increase of five percent.

More encouraging over the group superlative performance, over the last six months was the increase in its total assets , when some of the  Banks are still struggling  to maintain their existing assets. There is gain saying the fact that the Kenney Uzoka led UBA plc,, group assets as at June 30, 2021, had risen to N8.3 trillion, compared to  the  N7.7 trillion of the asset  level in June 30, 2020, which even the Competitors, had consideedr very impressive, giving the poor state of the economy.

Uzoka, the Group Managing Director of the Bank, GMB and his Management Team have every reason to be happy, over the half year financial report of the Bank. This is because the Bank aggressive marketing strategy aimed at winning more Customers, across the country and its offshore branches have begun to yield results.

The Bank’s Customer deposit base was said to have reached N6.1 trillion mark as at June 30, 2021. Note that as at December 31,, 3020, the Bank , only had a Customer deposit of N5.7 trillion, meaning that in six months, the Bank, had attracted additional deposits of  overN400 billion,  showing  an increase of 7.4%.

The pan- African Bank shareholders Fund, was said to have also remained outstanding at N52.5 billion, up from the N4.1 billion as at December 31, 2020. This may have informed why the Bank which has developed the culture of paying both the interim and final cash dividend since Tony Elumelu a well -known African Philanthropist and business mogul and Chairman, Tony Elumelu Foundation, who had acquired Standard Trust Bank in 2005, was said to have taking advantage of the privatization of government owned Enterprises  to  have used his majority shareholding in the newly acquired Standard Trust Bank  to take over effective  control  of   UBA which had been repositioned on the path of making  profit, declare dividends  for shareholders and equally take care of the welfare of the staff.

An elated Uzoka, the Bank  GMD, who had taken a cue from, Elumelu, the Bank’s Chairman, and who incidentally  also Chairs the Board of Directors of Heirs Holdings and Transcorp, could not hide his feelings as he had ‘’expressed  delight over  the impressive performance of the Bank in the first six months of this year’’, promising to sustain the record with the support and Cooperation of the staff.

He had alluded to the fact that ‘’it has been a very strong first half year for the Bank as the global economic recovery exceeded expectations, thus creating  a positive  rub-off on Consumer  and Corporate confidence, savings and investments’’.

He noted that the Bank has continued to leverage on its four key strategic Levers-people, process, technology and its Customer philosophy to revolutionalise Customer expertise ’’.  The Courtesy of the Bank officials, from the security men, Cashiers, Marketers, Branch Managers to the Management Staff, speaks volume. ‘’Welcome to UBA. Thanks for Banking with us’’, which is very encouraging.

He may have gladdened the heart of the Bank shareholders when he revealed that ‘’its investment in Nigeria and the 19 other countries in the African Continent, has continued to yield good profits to the group. Hear him: The benefits of pan –African diversification accruing to the group, is evident of the Bank’s gross earnings and interest growth income  of  5.1% and 8.3%, in the first half of this year, despite  the low yield environment due to the pandemic was encouraging.  According to him, the Bank is actually making progress on its strategy of doing good business which had repositioned UBA, as ‘’the first Bank of choice in Nigeria’’, described as’’ its largest market’’.

The UBA, GMD, who could not hide his feelings, had assured shared shareholders, Management and Staff, including its teeming millions of Customers that ‘’’’it will remain resolute in its drive for sustainable growth in customer acquisition, transaction volumes and Balance Sheet’’.  as it Moree so, it has promised to further Consolidate on its African’s global  Bank market position in the years ahead’’.

Ugo Nwaghbodoh, the Bank’s Group Financial Officer, CFO, had said that its goal was basically ‘’to achieve marked improvement in its earnings quality while maintaining its post  operating  leverage  as well as to  ‘’top-notch asset quality’’.It is on record that  that the group recorded  RoAE of 17.5%, in the first half of 2021, from the 15.1%   in the same period in 2020.  This is an addition to a Net Interest Margins of 5.8% as against 5.4% in the first half of 2020. The Group, CFO, opined that the Bank had’’ continued to play its role diligently  in the  volatile yield environment  for best return on interest earning assets’’.

Hepointed out  that ‘’even  while the operating  environment  remains  largely uncertain  and volatile , despite  the market improvement  from  the COVID-19, induced  economic crisis, UBA will continue ‘’to  build resilience   through its geographically  diversified  business model  to support the headline earnings growth for he group. It is on records, that the Financial Institution offers Banking services to more than  twenty five million  Customers, across over 1,000 business offices  and Customer touch-points in 20 African countries.