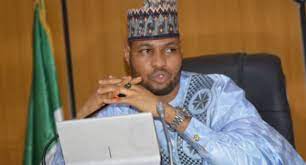 Bello Matawalle, a former People’s Democratic Party, PDP, in the north west state of Zamfara, described as home of bandits who had decamped to the ruling All Progressive Congress, APC, at the promptings of President Muhammadu Buhari, a retired  army General, as a way  to keep the region intact for the party, appears to have played into the hands of  Mahdi Aliyu Mohammad Gusau, the deputy who  had refused to  join him .

The refusal of the aggrieved Aliyu, the Zamfara deputy governor, to toe the path of Matawalle to decamp to the APC, according to party sources may have deepened the gulf between the duo forcing the later to work on the state House of Assembly members to   find reason to impeach him. Matawalle has every reason to see that his estranged deputy was kicked out of the new APC, government in the state, because he is still a Card carrying member of the Opposition PDP.

The state Lawmakers, who are  mostly the loyalists of Matawalle may have found a reason  to work  against  Aliyu, who was said to have been hobnobbing  with the PDP Leadership at the state and national Level, which the  governor and the APC, Caucus members did not find funny.

The Zamfara , deputy governor, who may is closely being monitored in the state by the  APC  dominated state House of Assembly and   security operatives, to avoid polarizing the state into two camps, by taking advantage of the incessant Bandit attacks of Communities and kidnap in the state to do so may have fallen into their trap.

Lat Saturday,   the embattled Zamfara deputy governor, who has the backing of the PDP, leadership in the state and the national level had held a politically motivated rally  to express his anger over what is happening in the state barely  barely 24 hours after the massive reprisal attacks by bandits on Faru Communitie in the Marudun  Local government area , described as one flash  points Local government areas in the state.  Note that not many surprised at the attack and the killing in the killing in the Community. This is because of the too many Bandit Camps in the state. Ibrahim Dosara, the state Commissioner of Information had said that there are 100 Bandit Camps in the state with over 30, 000 fighters, meaning that they can invade any Community and kidnap at any given time they consider it necessary to do so and return to their Camp in the Forest between Nigeria and neighbouring West African country of Niger.

The APC, dominated state House of Assembly may have been waiting for such an opportunity where they could have a good reason to invite the deputy governor to the House to explain about his anti-government activities in the state, aimed at bringing down the Matawalle government.

Yusuf Alhassan Kanoma, an APC, member of the House recent statement condemning the actions and utterances of the PDP deputy governor  in an APC, controlled government speaks volume. The Lawmaker, who may be acting out a script, may have turned the heart of his Colleagues against the former Matawalle close political ally  in his emotional outburst when he opined that the  estranged deputy governor, who was determined to get back at the governor  had organized the political rally  to score political cheap points ‘’while the state was  in a mourning mood over the killings  of the more than 56  people in an  attack  in Faru Community in Marudun Local government area speaks volume.

Putting on his political garb, Kanoma,  had said that by organizing the political rally in spite   of Husaini Rabiu, the state Commissioner of Police, disapproval clearly shows his disregard for the Law.  Describing  the deputy governor ‘’as ‘’undemocratic, uncivilized, too primitive  and local for  a person of  his personality   not mindful of the huge regards and respect  attached  to the exalted office’’, noted that the misguided utterance of the Deputy governor calls for question.

It was not surprising why he  had urged the House   to invite the deputy governor who had lost out in the Matawalle APC controlled government  to appear before it ‘’to explain  the circumstances surrounding   he hosting of the politically in the state’’, in this trying times.

But  Faruok Musa Dosara,  the House Leader, could not understand why the Lawmakers should limit the  invitation to  the deputy governor by insisting that it should also be extended to Rabiu, the state Commissioner of Police,  in order to find out from him whether  the embattled deputy governor obtained  permission  from the state Police Command to organize the rally  and the role  of the security operatives in stopping it if no approval was given  to him to do so.

Kanoma, who  was described in political circles in the state as one of the strong pillars of Matawalle and arrow head for the removal of Aliyu the state, may have won the heart of  the Lawmakers as they were said to have passed a resolution to invite  Aliyu, the deputy governor and the state Commissioner of Police to appear  before the House  on Tuesday , July 27, 2021 that prepare the ground for the impeachment of the embattled deputy.

Political Observers fear that  the Zamfara state deputy governor may not survive it as Matawalle, the  state governor and his political allies and loyalists in the House had made up their mind that he must go to   avoid exposing what is happening in the state and at the party Level to the Opposition PDP , which may take advantage of  it in the  February 19, 2023, general elections to Campaign against its Candidates jostling for elective positions in the state .

Many believe that if it is within the Constitutional powers of the governor to sack Aliyu, his estranged the deputy, Matawalle, could have done it at the same time he relieved his Special Advisers of their appointment.

He had  left the Special Adviser on Security matters untouched to avoid opening up a can of worms in the  In apparent response to critics accusation of relieving the Special Advisers of their positions because of their  alleged sympathy for the deputy governor, the governor had said that  the decision   was in line with  the recent defection  to the APC in order ‘’to allow  for an in depth search  of more Competent  hands  in the administration of the state’’, an indications that the former PDP Special Advisers who had lost their job were not Competent.

Recall that last February, Matawalle had sacked all the Commissioners and Special Advisers and re-appointed new ones. Informed government sources told The Value News that Matawalle, the Zamfara governor, may have done away with his former PDP, associates to prepare the ground to take over control of the APC, political machinery ahead of the2023 general elections by introducing fresh hand from the APC, that would  work for him.

There are indications that he may have a strong Opposition from Abubakar Yari, a former governor of the state and his Loyalists Camp who are opposed to his defecting to the APC and are determined to stop him at all costs.