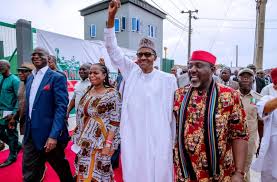 Those who think that President Muhammadu Buhari, the All Progressive Congress, APC, Presidential Candidate seeking re-election in 2019, Presidential is desperate to win state should perish the idea. This is because he may bothered if  APC loses the state to the Opposition People’s Democratic Party, PDP,  or to political party as he is more concerned in winning Abia state, the Commercial nerve center of the state. Many believe that he is prepared to sacrifice Imo state but win Abia in the presidential election and the All Progressive Congress, APC, winning the state gubernatorial election on March 2, 2019.

He may have come to the conclusion that the APC had lost Imo state because of what he saw on  ground on Tuesday, January 29, 2019, during the Campaign packaged by the Presidential Campaign Council, under the Chairmanship of Asiwaju Bola Amed Tinubu, a former governor of Lagos  and the party national leader.  The people may have told Buhari through their body language that they don’t  ”want him”.

His first major worry when he arrived the Campaign ground was the low turnout of people compared the large crowd witnessed in Bauchi, Borno, Yobe, Sokoto, Katsina and Kano state. The Tinubu led Buhari Presidential Campaign Council were said to have planned in such a way that he would appear in all the Campaign rallies instead of him, Tinubu leading most of the Campaigns  as earlier agreed.

Eyewitness account disclosed that what the APC Presidential Candidate saw in the state which Rochas Okorocha, the governor, had boasted that  is under his firm control  convinced him that the party is not welcomed in the state. This may have forced him to advise the people to vote for the party Candidate of their choice.  ”Choose whoever  you like across party, ethnicity and religion”, he had advised them. Appealing to the people not to” lose their sense of responsibility”, he urged them  to” maintain their balance and senses to”’ vote for who they want’ as their votes count.

Okorocha, who had expected  him to canvas for votes for all APC Candidates seeking elective office  in the state may have been  disappointed as he looked calm while posing with Buhari , Adams Oshimhole, the party National Chairman and other party Chieftains at the rally. The APC Presidential Candidate may have presented Hope Uzodinma, the party candidate in the March 2, governorship election  despite claims by a faction of the party that he has been suspended  over an undisclosed offence. Political watchers believes that Okorocha, the state governor had master-mind the suspension to frustrate his governorship ambition. The APC  Flag bearers was said to have left Imo with his Campaign train to Abia, a neighbouring state for continuation of the Presidential Campaign.

Political Observers said he was more at home at Abia state where he assured the people  while inaugurating  the” Ariara  Market  Independent  Power plant of a 24 -hour power supplies in Abia, the  state Commercial nerve center. ”I am pleased to be in the state  at the milestone connection of over 4,000  shops that now have dedicate power”, he enthused.

According to him, being a market that supplies shoes, bags, clothing, trucks and  many household accessories to countries in the west and central African sub-region ,including meeting the demands of the local market, the government has no option but to provide ” reliable power supply for ease of doing business  for sustainability and improvement” to compete with their foreign counterparts.

The Abia state Presidential Campaign rally would have been complete if Orji Uzor Kalu, a former governor of the state  who believes in the Buhari presidency  has been healthy but has been kept out of the APC presidential Campaign because of  an undisclosed sickness as he shuttles between Nigeria and Germany for medication . Buhari may have warmed himself to the people of the state with the project which was more desired by the traders. The” large turnout of the traders at Umuahia, the state Capital , on Tuesday during the Campaign, speaks volume.

The APC  controlled government may have attached more importance to the execution of the project to the project  to win the state at all cost.

This is evident going by the Statement issued by Garba shehu, Senior Special Assistant to the President on Media and Publicity , that Buhari who is delighted that 37,000 shops, as against the 4,000,shops which the he had earlier announced by  in his speech, that would be connected to the power plant to help the traders and small business owners in the in the Ariaria international market .

He may have gladdened the heart of the traders when he said, the ”country’s economy is moving from rent and arbitrage and heading  absolutely  towards investment,, enterprise and hard work”, no thanks to the Aba traders.

Abia, according to the party records is the 18th state to be visited by Buhari in his Presidential Campaigns ahead of the February 16, 2019, Presidential election. Going by the Independent National Electoral Commission timetable the deadline  for Campaigns is February 14, 2019.  it is not surprising why APC Presidential Campaign Council are rushing to take Buhari, the party Presidential Candidate  round the 36 states of the Federation to prove to the people that Buhari is still much strong to stand the rigours of the Campaign despite the PDP’s claim that he is sick.

This is where the Atiku Presidential Campaign Council under the Chairmanship of Bukola Saraki, a former governor of Kwara state and now Senate President may have to step up his presidential Campaign to sell his political manifestoes to the people  instead of turning into a political issue the suspension of Walter Kanu Onnoghen, the Chief Justice of Nigeria, CJN, by Buhari over alleged undeclared Assets and operating different domiciliary accounts with Standard Chartered Bank , Wuse Zone 2, Branch, Abuja on the recommendation of the Code of Conduct  Tribunal.

Atiku  the  PDP, Presidential Candidate may have suspended Campaigns for 72 hours in protest over the suspension of the CJN to win the heart of Nigerians in the election which political analysts fear may have a backlash effect if he does not change his Campaign strategy and face the real issues at hand and how to solve the  al-economic problems of the country.  Bello Umar, an indigene of Sokoto State, would want him to go beyond Buhari as Nigerians see him see him as the tide in of the APC  the election.