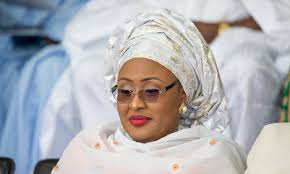 The recent outburst of the First Lady, Aisha Buhari, has sent jitters down the corridors of power, more so when there are speculations of impeachment plans on the Vice President, Yomi Osinbajo.

Aisha has recently been reported to have decried the fact that the affairs of the country has been hijacked by only two powerful individuals. She, however, did not name the individuals involved.

Speaking at a conference organized by Project 4+4 in Abuja, which has in attendance wife of the Vice President, Dolapo Osinbajo, among others, Mrs Buhari insisted that she knew that the Vice President’s wife will not be happy with her out burst, but the truth has to be told.

”I have realized that Senator Babafemi Ojodu, Special Adviser, political, to the President, and Dr. Hajo Sani, and wife of the Vice President, Mrs. Osinbajo, are not comfortable with my saying this and want me to confine myself to my prepared speech but we must say the truth,” she said.

Indications are that the outburst has rattled the powers that be in Aso Rock because it dovetails into her earlier lament at the early stages of the husband’s administration, when she lamented that the Presidency has been hijacked by those who never suffered to install the President. She has been silent on the raging conspiracy that the person sitting in Aso Rock is not her husband.

Aisha’s statement is the latest of such uncomplimentary statement from those in the corridors of power complaining that the presidency has been hijacked.Such conspiracies has been pulling a dragnet of speculations out of the sea of confusion and angst in the populace. One of these speculations is the theory that there is an underground plan to begin the impeachment process of the Vice president citing the case of the $5,8 billion dollar scandal. A member of the house of representatives, Johnson Agbonayinma, representing Egor/Ikpoba Okha appears to have confirmed this magazine findings when he alleged that some honorable members are already collating signatures for the purpose of his impeachment. The thinking in some quarters is that a North western governor chose a Muslim candidate as his running mate for a reason. Firstly, he created a precedence that could be replicated anywhere, thereby paving the way for it to be replicated at the Presidency level. “It is highly likely that, based on international opprobrium and social media pressures, Buhari may decide to step aside from contesting the 2019 elections. So the powers that be are strategizing on making sure Osinbajo does not take over. If he is impeached, el Rufai has been lobbying to be the Vice President so if he resigns, he will automatically be the Presidential candidate. The Muslim-muslim ticket will no longer be an obstacle”, a top PDP source told this magazine. Buhari himself, in far away Poland, allegedly declared that some people were already lobbying Osinbajo to be VP in the belief that he-Buhari- was dead.

But the Osinbajo/Tinubu axis may not just sit and watch this manifest. Thus there appears to be a major war within the All Progressives Congress, APC, that may finally dwarf the Oshiomhole crisis, if feelers are to be believed.