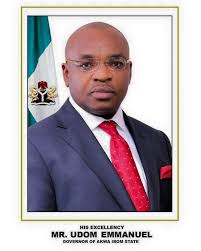 The Akwa Ibom State Commissioner of Police  Mr Musa Kimo—- who is barely two weeks in the state after assuming duty in that capacity is on the hot seat as the State Governor, Udom Emmanuel, the Onofiok Luke State House of Assembly, the women group sympathetic to the PDP, Youths and the state PDP have jointly resolved that the police boss should be redeployed from the state immediately. They accused him of using his men to embolden the  APC law makers whose seat were declared vacant last week to invade the Assembly with the intent to carry out impeachment of the leadership of the house.

The women and youth groups including students yesterday Wednesday took to the streets of Uyo, Akwa Ibom state capital to protest against the current crisis rocking the state house of assembly.  They expressed worry that the development was threatening the existing peace and safety of lives and property in the state, warning those fueling the crisis to desist henceforth.

Akwa Ibom women groups who were reportedly drawn from the 31 Local Government Areas of the state and clad in black attire with placards had marched through some major streets of Uyo including Udo Udoma Avenue, calling for the restoration of peace as well as law and order in the state. The women protesters numbering over 500, including wives of Legislators, Commissioners  wives of local government Chairmen, market women among others, were led by the Commissioner for Women Affairs and Social Welfare, Dr. Glory Edet, the Women leader of People’s Democratic Party PDP, Mrs Mmeme Akpabio and a former Minister of Lands , Dr Akon Eyakenyi.Armed with placards of different inscriptions like  ‘We Need Peace in Akwa Ibom state’ ; Luke is the authentic Speaker’,’ Kimo Must go’ equally called for the redeployment of the newly posted State Police Commissioner,  Kimo. Fielding questions from newsmen in front of the assembly premises , Edet said they embarked on the peaceful protest to show their anger and sadness over plan by some people to destabilize the peace in the state. “We came also to reaffirm our support for Governor Udom Emmanuel because we have made a declaration and on the declaration we stand that governor Emmanuel remain our governor beyond 2019.  “We have taken a decision and no amount of intimidation can move us because we know all they are trying to do is to destabilize Akwa Ibom. We came to urge the governor not to be afraid and that he should not feel intimidated. We are dressed in black to show that we are not happy; that we are sad and unhappy about what is happening” Addressing the women, the Speaker, Rt. Hon Onofiok Luke described the recent occurence in the House of Assembly as a threat to the nations democracy and called on security agents to desist from aiding lawless persons from carrying out illegal activities targeted at obstructing the Legislature from carrying out their constitutional duties as well as truncating the existing peace in the state.

Prior to the protest by the women, the state Governor  Emmanuel had not only called for the removal of the police commissioner, Mr Kimo , given his partisan role in the Tuesday invasion of the house by five former legislators with a retinue of thugs but pointedly fingered senator Godswill Akpabio as the brain behind the crisis.

The Governor sressed that Akwa Ibom is a peaceful state and therefore enjoined the President Muhammadu Buhari and the international community to intervened by calling the perpetrators of the crisis to order as his government and the good and law abiding people of the state will resist attempts by self seeking politicians to throw the state into anrchy.

But the state commissioner of police, Mr Kimo has refuted the claim that he ordered his men to back the five APC lawmakers. He said the duty of the police is to maintain law and order and that their presence there on the fateful day was in line with their duty to guide against the breakdown of law and order.

Similarly, Anietie Ekong media aide to senator Akpabio also absolved his principal from complicity in the invasion, wondering how the senator who was not present at the scene of the crisis could be accused of masterminding the invasion.

The crisis rocking the Akwa Ibom State House of Assembly began two weeks ago when the Speaker Luke declared vacant seats of five PDP legislators that had defected to the APC. The declaration of their seat vacant was sequel to a court order that ruled that the defected members had no right to hold on to their seats since their defection was not done in good faith as there was no crisis in PDP to justify their defection as at the time they did. The ruling was based on the litigation by one of the affected lawmakers Nse Ntuen who had gone to court to seek an injunction restraining the declaration of his seat vacant. It was based on the court ruling that the Speaker declared their seat vacant which led to their invasion of the Assembly last Tuesday.

Meanwhile the House in their plenary session called for the arrest of the five legislators for prosecution and also the redeployment of the state commissioner of police.