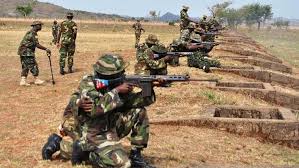 Those who think that the Multi-National Joint Task Force, MNJTF and the Nigerian Army, have succeeded in dislodging the Abubakar Shekau’s led BokoHaram insurgents in the fishing town of Baga, Kukawa local government , of Borno state, would be disappointed. This is because the insurgents are still holding on to the well trained MNJTF and Nigerian soldiers in a fierce battle for control of the fishing town.

Sani Kukasheke Usman, a Brigadier General, and Director of Army Public Relations had said  last week that the situation in Baga was under control, stressing that ”residents have  no cause to worry”.Thousands of people were said to have fled the town  with a few of their personal belongings to Maiduguri , the state Capital, to  avoid being killed in the cross fire.

As at press time, some of the run-away residents of the Baga fishing town,,  mostly women and children were yet to be accommodated  by the National Emergency  Management Agency, NEMA, as they roam about the streets of the City, exposing them to further danger, thus making a mockery of president Muhammadu Buhari Security measures in the north east.

Usman had created the impression that the insurgents who had attempted to overrun  the Baga Headquarters of the 7 Brigade on Wednesday, December 26, 2018,  and which left 13 soldiers and one police man dead had been flushed out from the town.

But information filtering out from the fishing town  shows that it was not yet clear which party was in total control of the town: the MNJTF or the insurgents. Lamidi Adeosun, a Major General and Chief of Operations and Trainings, while addressing Journalists on the military operations in Baga in Maiduguri, the Borno   City said the” Army  are still battling  to take over effective control of the fishing town from the insurgents”.

Given the stiff resistance of the Boko Haram fighters who were said to be  armed to the teeth and other militants across the country, CAS, Tukur Buratai, a Lt. General and Chief of Army Staff, CAS, was said to have flagged off ”Operation Egwu Eke III”, which, in Igbo parlance, means Dance of the Python, described by security experts as more deadly  in their operations  than Lafiya Dole in the north east geo-political region. The Army General may have launched the Special Operation Force  to intensify  the security Operations across the country ahead of the 2019 general elections.

The CAS who confirmed that ”there was a build up  to the elections, as there had been an upsurge of arms  by criminal groups , formation of ethnic militias  and violence induced  by political activities”. He noted that  the security challenges  coupled with other security threats  across the country such as the Boko Haram threat, militancy, kidnapping  and banditry  , gives an insight that  dissident groups  and criminal gangs are cashing in on the  situation to penetrate large scale violence on or before the elections.

Already, there are fears in both official and unofficial circles that if the crisis in Borno, Yobe and Zamfra states , continue unabated , officials of the Independent National Electoral Commission, INEC, might not be able to gain entry into these flash point states to conduct the 2019 general elections.

At present, the situation in Borno stare look a bit dicey.  The AFP had reported recently that the  BokoHaram insurgents  had  sacked two military bases  as they  battled the MNJTF and the Nigerian soldiers stationed in  Baga to take over control of the town.

Security sources reportedly  confirmed on Thursday. December 27, 2018, that the BokoHaram insurgents who may have been infiltrated by the Islamic State of Wes Africa Province, ISWAP , had overran a Naval and a MNJTF  post in Baga after a fierce battle. The security source had disclosed that the insurgents had stormed  the town with several gun fitted vehicles and engaged  the troops in an intense battle  at the MNJTF  base which allegedly hosts  military units from Nigeria, Niger, Chad and Cameroun. The hard fighting insurgents may have been encouraged also to  storm the Naval base in mile 3, some five Kilometers from Baga, to show that the MNJTF and the Nigerian soldiers have lost control of the town.

The AFP reports indicates that the insurgents may have be using the gun trucks, ammunition and multiple rocket launchers carted away from the alleged two military bases allegedly  sacked  to fight the MNJTF and the Nigerian soldiers.  This is where the officials of the Directorate of Military Intelligence, DMI, Dep, DSS,artment of State Security and Police Intelligence Unit, have to sharp their intelligence gathering to feed the fighting soldiers with information on strange movements in the state to put them on the alert to ward off any attack from the insurgents at any point in time.

There is no gain saying the fact that the DMI, DSS or the Police Intelligence Unit may  not do it alone as buratai, the CAS, has appealed to Nigerians, particular residents of Borno state to provide men and women in uniform  timely and credible  information to enable them deliver on the mandate of Exercise Egwu Eke, III.